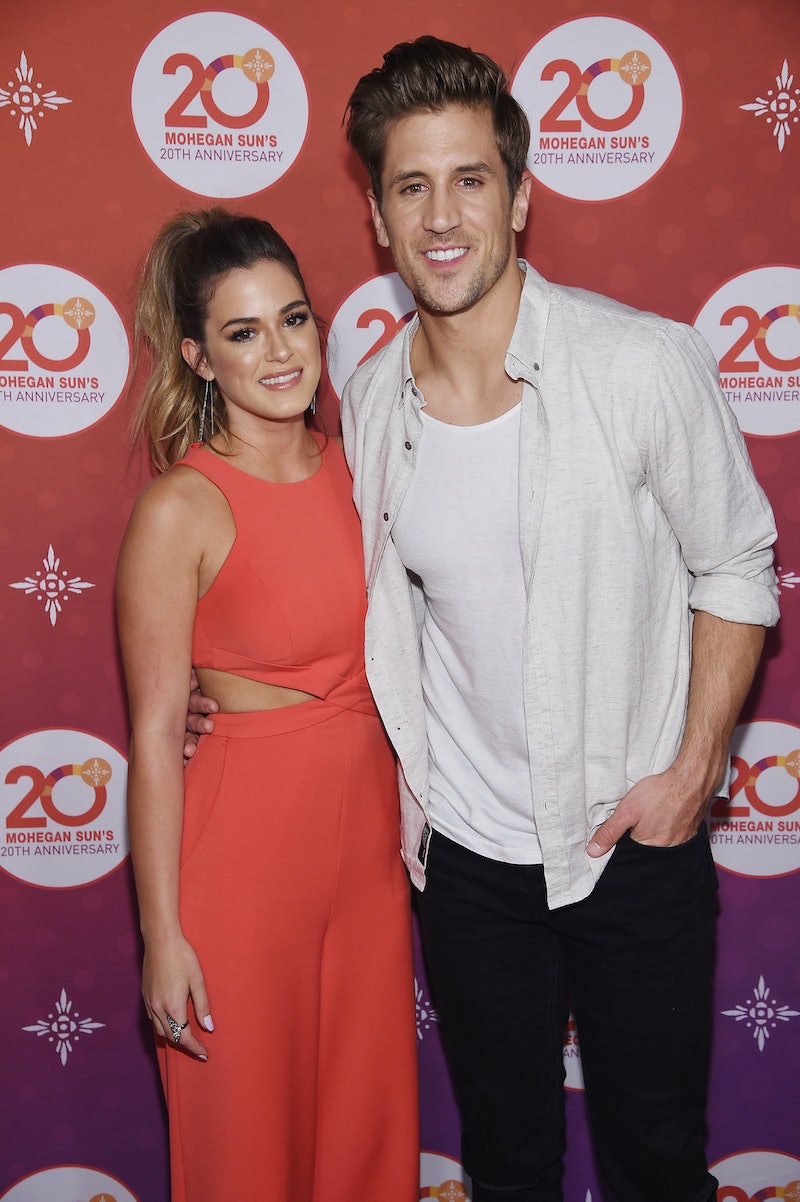 Outlasting the expectations for Bachelor franchise couples is a big deal, especially since most pairs don't stay together too long past the series' end. As a result, this leads to more speculation about the couples who do last. For example, fans have plenty of questions about JoJo Fletcher and Jordan Rodgers' future wedding. Like when is that happening anyway? Well, Jordan teased he and JoJo are getting married "next" in an Instagram post shared on April 7.

Jordan posted a photo to celebrate his brother Luke Rodgers and Aimee Wathen's wedding day and gave Bachelor Nation the update they've been longing for in the caption. Jordan wrote, "Wedding Day for these two! Couldn’t be happier to add a sister to the family! @joelle_fletcher we are up next!"

As a recap, JoJo and Jordan got engaged during the season finale episode of The Bachelorette in 2016. In a February 2019 interview, the couple discussed wedding plans with Entertainment Tonight. They didn't actually announce a date, but they announced a plan to announce a date.

JoJo shared, "We said that 2019 was going to be the year that we set our date, so now we're actively thinking about when the date is going to be." They also said that they would wait until Jordan's brother Luke got married before announcing their own wedding date.

Now that Luke tied the knot, let's hope that a more definitive announcement is next. JoJo and Jordan told ET in that same interview that they would enjoy a destination wedding in spring, so maybe Spring 2020 will be it for them. JoJo did confirm one specific thing, too. She declared, "I don't want any red roses." Really? Not even one for old time's sake?

They may be done with the roses, but they may not be done with reality television. Yup, they might let the cameras film their wedding for a TV special. During a Feb. 26 episode of their YouTube series Engaged With JoJo And Jordan, the couple admitted that they are open to a televised wedding. JoJo said they would do it "only if it was done the way we wanted it to."

But is the franchise done with wedding specials? Carly Waddell and Evan Bass' wedding was featured during a Bachelor in Paradise episode in 2017, but didn't get their own special. The last couple who did was Jade and Tanner Tolbert in 2016.

Bachelor executive Robert Mills discussed the possibility of a Bachelor wedding special in a February interview with Entertainment Tonight. He kept it real when he explained the obstacles of a TV wedding:

"I think we will, but it’s a whole host of reasons. One is the least romantic of all: do we have room on the schedule for a wedding? And we hate to say that someone is planning their wedding around a Thursday in February at 8 p.m."

And, of course, there's the ratings. He said, "The Bachelor is a primarily female show, but there are also a lot of men who watch. And it’s been hard to find men who want to watch a wedding, unfortunately. I don’t know why, but you’re cutting some of the audience right there."

Whether JoJo and Jordan get married on TV or not, it seems like they will hopefully keep their fans in the loop when it comes to their wedding plans. There are plenty of people in Bachelor Nation who want more details.