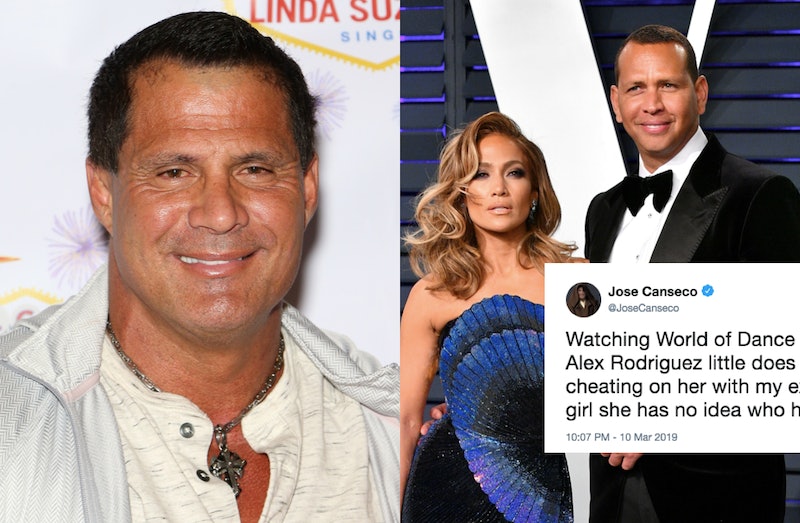 Less than 48 hours after Alex Rodriguez and Jennifer Lopez announced their engagement, there are already rumors about the couple — and they all started with another former baseball player. In a series of tweets shared on Sunday night, Jose Canseco accused Rodriguez of cheating on Lopez with Canseco's ex-wife, Jessica, as pointed out by BuzzFeed. (Bustle reached out to reps for Lopez and Rodriguez for comment on the claim, but did not receive an immediate response.)

According to Canseco's Twitter spree, he was with Jessica a few months ago when Rodriguez reportedly called her. He didn't go into much more detail than that in his tweets, but he did implore the former New York Yankees player to "stop cheating" on Lopez. "Watching World of Dance watching J.Lo text Alex Rodriguez little does she know that he is cheating on her with my ex-wife Jessica poor girl she has no idea who he really is," Canseco wrote in the first message. "I was there a few months back with her when he called her on her phone."

"Alex Rodriguez stop being a piece of sh*t stop cheating on Jennifer Lopez," he tweeted. "Alex Rodriguez I challenge you to a boxing match or an MMA match anytime you want."

Canseco later added, "I am willing to take a polygraph to prove that what I'm saying about Alex Rodriguez is 100% accurate."

So far, this is all that Canseco has posted online about his theory about Rodriguez, but it's impossible to know if it he plans on adding to his Twitter storm now that the story is gaining traction.

Additionally, Bleacher Report writer Tyler Conway pointed out on Sunday night that this isn't the first time that Canseco has accused Rodriguez of having feelings for Jessica. In a 2008 article, the New York Post reported that during a book signing, Canseco said that he thought Rodriguez and Jessica had an affair, although Rodriguez denied it.

“I believe they had an affair,” Canseco said at the time, per the Post. “I’m pretty sure of it. I spoke with Alex and he denied it, but the way he denied it, it wasn’t reassuring. I spoke to my ex-wife last year about it and I’m not going to say she acknowledged that they did, but she did not say that they did not.”

Rodriguez and Canseco know each other since they're both former Major League Baseball players, although Canseco retired before Rodriguez did.

Rodriguez and Lopez announced their engagement on Saturday, during a trip the couple has taken to the Bahamas. She showed off a photo of her new ring at sunset on Instagram as Rodriguez took her hand in his. He also shared the same photo on his Instagram account, writing in his caption, "she said yes."

The couple also shared several other photos from their getaway on Instagram, showing them spending quality time together on the beach.

Rodriguez and Lopez recently celebrated two years together after they started dating in February 2017. Until now, their relationship has been pretty drama-free — at least, according to what is known publicly about their life together.

So far, Rodriguez and Lopez have yet to respond to Canseco's claims. It appears they're still on vacation, celebrating their engagement.