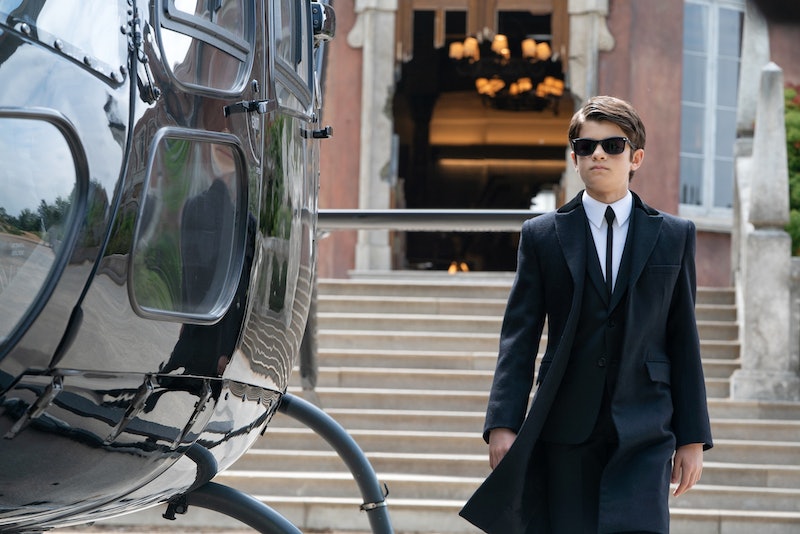 Artemis Fowl isn't getting the big screen debut fans of the original Eoin Colfer books had hoped for. But one advantage of a Disney+ release is that viewers can watch it over and over and over right away, which might just help turn Artemis Fowl into the next Harry Potter — something star Josh Gad would not be opposed to. "I'm obsessed with Harry Potter," Gad tells Bustle during a visit to the Artemis Fowl set in April of 2018. "There hasn't been a Harry Potter in a long time. A new Harry Potter. This feels like the answer to that."

There are many similarities between Artemis Fowl and Harry Potter. Both center on young boys who are thrust into a world of magic after the death (or, in Artemis' case, the disappearance) of their parents. But they are also very, very different. Gad, who plays the master thief dwarf Mulch Diggums in the film, sees Artemis as "the antithesis to Harry." As fans of the books know, Artemis doesn't start out to be a hero, he wants to be a villain. "Artemis starts almost at the end of Harry's journey," Gad explains. "He's very manipulative." Despite these differences, Gad says he sees the world of fairies and underground magic in Artemis Fowl as something that "speaks to a crowd and an audience that is desperately longing for something to fill that [Harry Potter] void."

As seen in the new clip, Artemis, like Harry, is thrust into magical conflict by his dad, who disappears mysteriously, leaving Artemis to pick up where he left off. And if Artemis is the Harry of Artemis Fowl, then Butler, played by Nonso Anozie, is kind of his Dumbledore. Butler is Artemis' guardian and caretaker, but he's also his partner in crime. "I think Butler sees Artemis as somebody that he loves as well as somebody that he has to protect," Anozie says. As for whether he's ready to be involved in what could potentially be Hollywood's newest fantasy franchise, the actor isn't concerned. "To me personally, I think that it's my job," he says.

More like this
Netflix Shut Down 'Bridgerton' S3 Rumours About A “Very Dark” Storyline
By Bustle
Anne Hathaway Shared A "Thrilling" 'Princess Diaries 3' Update
By Darshita Goyal
The 'Scream 6' Trailer Shows Off Hayden Panettiere's Return & Ghostface In NYC
By Jack Irvin and Jake Viswanath
Bill & Frank’s 'The Last Of Us' Episode Has Twitter Emotionally Wrecked
By Alyssa Lapid
Get Even More From Bustle — Sign Up For The Newsletter
From hair trends to relationship advice, our daily newsletter has everything you need to sound like a person who’s on TikTok, even if you aren’t.