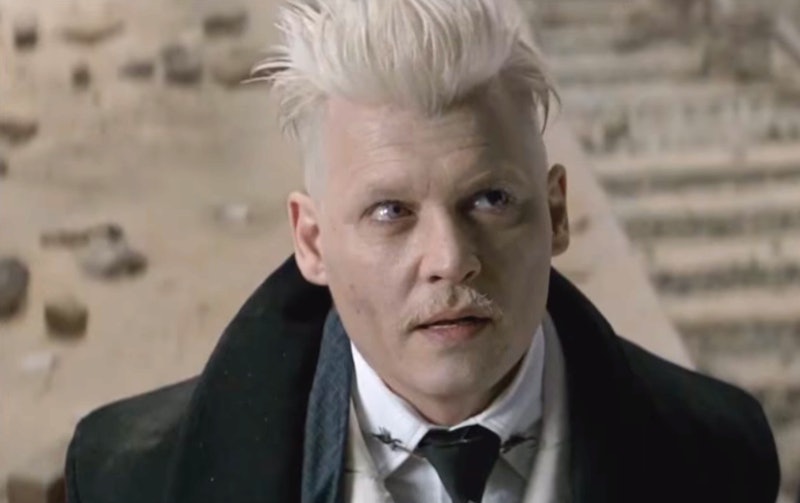 The release of the first official cast photo for Fantastic Beasts: The Crimes of Grindelwald on Thursday, Nov. 17, should have been an exciting day for Harry Potter devotees. Instead, it left some fans asking if Johnny Depp will be recast in Fantastic Beasts. The actor has the high profile role of Gellert Grindelwald, a legendary villain in the Harry Potter series whose story appears to be the driving force behind the sequel to the spin-off film focused on Newt Scamander. In light of the allegations of domestic abuse made against Depp by his ex-wife Amber Heard during their divorce proceedings (Depp denied Heard's claims of abuse), it's hard for many fans to understand why Warner Bros. has chosen to keep the Pirates of the Caribbean actor in the film. The studio had no comment on the backlash.

Heard accused Depp of physical and verbal abuse in 2016. At the time, her accusations were backed up by Depp's former financial managers at The Management Group (TMG), who also filed a suit against the actor. People reported that TMG released papers alleging that, "[Joel Mandel, one of the managers] was informed well after the fact through communications with various house staff and security that Depp had been extremely volatile and had sometimes 'gotten physical' with Heard."

In August 2016, the couple settled their divorce, and Heard withdrew her domestic violence restraining order petition. Heard and Depp then released a joint statement to TMZ that read,

Despite this, fans are not OK with Depp playing such an important role in the film, and they believe there's no reason why Warner Bros. couldn't recast.

It's certainly not too late for another actor to step into the role of Grindelwald. The release date for the second installment in the Fantastic Beasts franchise is still a year away, and filming remains in progress, according to a recent post from Mugglenet. Even if the movie was completed, that wouldn't be an excuse to keep Depp on board in an era where Hollywood is showing less tolerance for alleged abusers than ever before.

In light of the sexual misconduct allegations against Kevin Spacey, director Ridley Scott recast the actor's role in his upcoming film, All the Money in the World — despite the film being completed. (According to Spacey's rep on in a Nov. 1 statement to Variety, "Kevin Spacey is taking the time necessary to seek evaluation and treatment. No other information is available at this time.") If Scott and Sony Pictures, the company behind the movie, were that committed to replacing Spacey, it seems making the swap would be even easier for Warner Bros. and Fantastic Beasts director David Yates. After all, the movies are set in a world of magic where things like Polyjuice Potion exist. The studio wouldn't even need to look far for an actor to replace Depp since Colin Farrell played the role of Grindelwald for the majority of the first film.

Going forward with Depp may be the more costly outcome. While some fans are supporting Depp, it seems that just as many have taken to social media to voice their displeasure with seeing Depp remain in the role of Grindelwald. Their frustration is compounded by the importance of the role.

There's no doubt that the character is a fascinating figure whose brief mentions in the Harry Potter books ignited quite a bit of curiosity from the fanbase. Grindelwald is both Dumbledore's greatest enemy and dearest friend. According to J.K. Rowling, Grindelwald may also have been the love of Dumbledore's long life. A character of that much significance within the canon is one fans want to enjoy seeing onscreen. Due to the domestic abuse allegations against Depp, that may not be possible for those who are appalled by the actor's alleged actions.

It's clear why some fans are frustrated by the studio and filmmakers' choices to support Depp's role in what should be a family-friendly film. The message it sends is one that's antithetical to the mission statement of the Harry Potter books. They are, at their heart, a celebration of love and how goodness triumphs over darkness. Putting Depp in the title role of the Fantastic Beasts in light of the allegations simply doesn't align with those values as far as some social media users are concerned.

So, will Depp be recast? In the current environment in Hollywood, anything is possible. However, so far, Yates, Rowling, and the studio seem set on moving forward with him in the role of Grindelwald. As for whether or not Depp could be recast at this point, the answer to that is yes. It might not be the easiest route for the studio to take, but it might just be the right one.