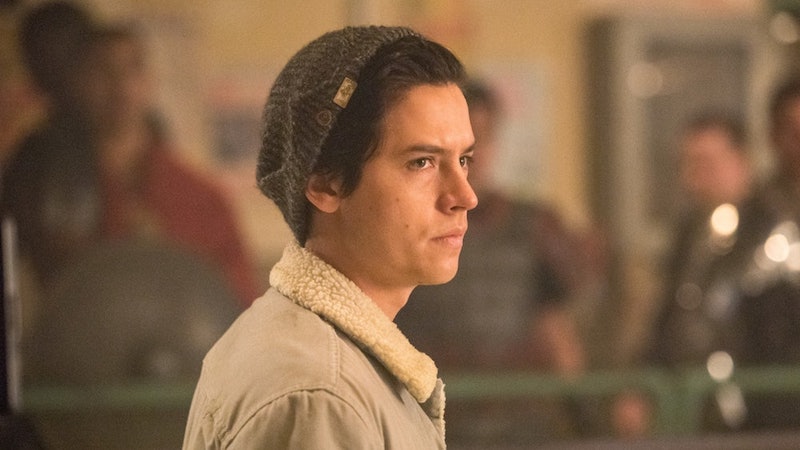 Are Jughead’s days numbered in the world of Riverdale? Perhaps not. Jughead’s Riverdale fate shouldn’t necessarily worry fans, according to Cole Sprouse. The third season of the hit CW series concluded in May on a series of sinister notes: Penelope Blossom and her posse of minions, Chic and Hal, were unmasked as the Gargoyle King; the Farm and its cult leader Edgar Evernever, depicted by a convincingly menacing Chad Michael Murray, completely vanished; and the series’ core group Archie, Jughead, Betty, and Veronica engaged in a deadly game of Gryphons & Gargoyles that resulted in a major cliffhanger. In a flash forward scene to spring break, Archie, Betty, and Veronica are poised around a fire disposing of their clothes (and Jughead's beanie) while Jughead is alarmingly absent.

So what the heck happened to Jughead? Why was he not with his group of friends as they looked shaken to their core in the woods? Should fans be stress drinking milkshakes from Pop’s Diner over Jughead’s fate? “I couldn’t tell you,” Sprouse told Variety in a new interview about Jughead’s fate post-cliffhanger. He continued, “To be honest, I think there could be a Riverdale without every single one of our characters. And then we’ll appear as ghosts, or our twins will take our place.”

That’s not entirely reassuring. But could this be inclination that fans shouldn’t be too worried about Jughead’s fate? But if he were dead, could Jughead’s long lost twin arrive in the troubled town in Season 4? Or, could Jughead haunt the halls of Riverdale High? According to series creator Roberto Aguirre-Sacasa, the events that lead up to Archie, Betty, and Veronica in the woods sans Jughead will serve as the central mystery of Season 4. However, when asked about how worried fans should be over Jughead’s fate, Aguirre-Sacasa told TVLine, “Very worried. [Laughs] Very worried.” Oh, no.

Still, fans should be reassured by the fact that Sprouse is in no hurry to leave the world of Riverdale. Of the series, which has given him a “renewed appreciation for acting,” Sprouse told Variety, “I’m somewhat of a workaholic. Maybe that’s my child-star brain, where I just can’t stop thinking about being a commodity.”

In his interview, Sprouse also discussed filming the Season 4 premiere, which will serve as a tribute to the late Luke Perry. The actor, who died in March from a stroke, depicted Fred Andrews for three seasons. According to Sprouse, fans can expect scenes where Jughead helps KJ Apa’s Archie say goodbye to his late father. He told Variety of filming the scenes, “The important line we’ve all been trying to draw is how to separate, how we can portray real emotions, but in the eyes of the characters,” he said. “If I was making this an entire sob story about my relationship with Luke, it wouldn’t be a job well done. My job is to do it in the eyes of Jughead.” He added, “Luke was the kind of guy who would not like people crying about him. I hope this episode does him justice.”

Riverdale returns to the CW on October 9. Between Perry’s absence and Jughead’s uncertain fate, Season 4 will certainly be a heavy one.