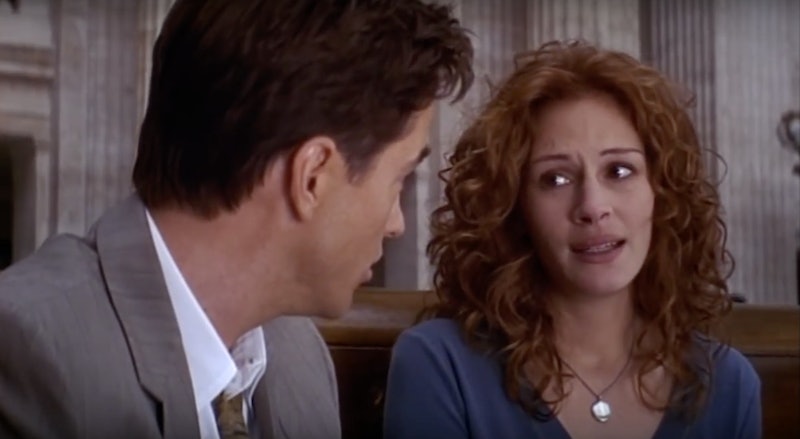 Say a little prayer for MBFW Twoooo. Julia Roberts and Dermot Mulroney's My Best Friend's Wedding comments in the new issue of Entertainment Weekly sure do get the ol' sequel wheel spinning. Yes, the comments are hypothetical, but they're still something. When EW asked Roberts which of her movies she'd like to revisit, she picked MBFW. The Homecoming star didn't flat-out say it's actually happening or something that she's going to make happen, but she said that if she were to return to one of her many, many outstanding movies, she'd choose 1997 rom-com My Best Friend's Wedding.

“I guess I think maybe it’s just because we’re talking about Dermot [Mulroney]. But Rupert [Everett] was so funny in My Best Friend’s Wedding. I guess Kimmy (Cameron Diaz) and Michael (Mulroney) are married and they probably have kids. And then there’s me and Rupert.”

“I’ll tell you that movie has wormed its way further and further under my skin, and I see more and more layers of how it holds meaning and sustains as a piece, and obviously it’s always been irresistible. I think there’s only about four people on Earth that could make a movie like that, and they include Rupert, Cameron, Julia, and me. So, let’s have at it.”

Doesn't Newton have a law about this? It's something like "When Julia Roberts and Dermot Mulroney appear on screen together, there is an equal and hypothetical My Best Friend's Wedding sequel chatter reaction," right? When the two actors were reunited in 2013's August: Osage County, folks wondered if they'd ever get back together for a sequel to a certain romantic comedy that came out when the Spice Girls were still a group.

A few months before August: Osage County hit cineplexes, Entertainment Weekly revisited an idea that was floating around all the way back in 2001 called My Best Friend's Divorce. This sequel, as you might’ve noticed, never came about. When Vulture asked Mulroney about it in 2013, he said,

"It doesn’t quite have the same ring in the title. But I wholeheartedly embrace the idea of sequel-ing up My Best Friend’s Wedding. This could fly. If I knew anyone in the upper chairs of Hollywood executive offices, I would call them. But I don’t. That would be a monumental movie. I say let’s put that into motion immediately! Let’s pop out a script and call [writer and producer] Ron Bass. I’m sure he’d be happy to fling it together."

That same year, he told Variety,

“I think everybody wants a [My Best Friend’s Wedding sequel]. I want it! Julia and I talked about it recently, and she thought it would be an amazing idea.”

As on board as everyone may or may not have been, it didn't turn into anything. Mulroney told Huffington Post in 2016,

“I’ll say whatever I want about the sequel ― the phantom sequel for My Best Friend’s Wedding, but it’s not real, people! I’m supporting the fact that this seems like a good idea, but I want to emphasize that it isn’t a real thing.”

Perhaps one day this sequel idea will Jell-O together, or maybe this idea will always be creme brûlée.