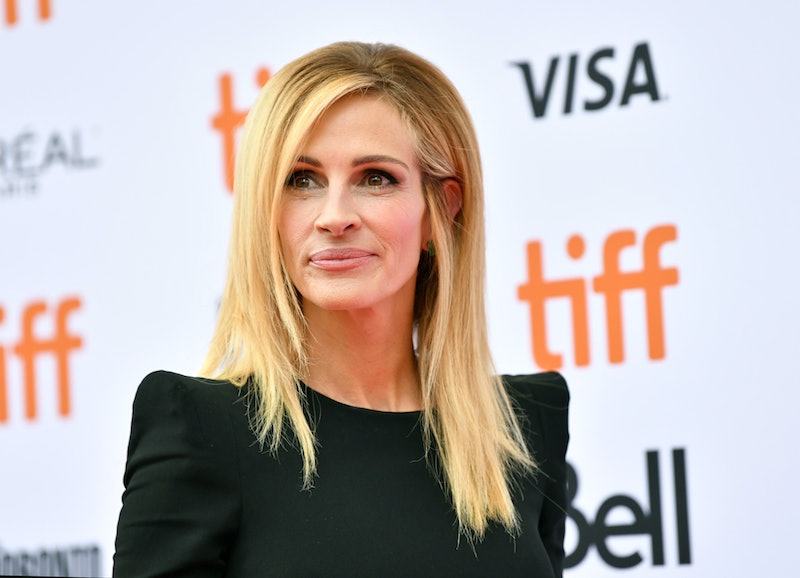 If you've been perched on the edge of your seat waiting for her next meet cute, you can relax back into your chair, because Julia Roberts doesn't want to do any more rom-coms. But don't worry — that doesn't mean she's ruling out films altogether; it just means that Roberts is setting her sights on fare that's more appropriate to her life experience. And that's straight from the mouth of the actor herself, who sat down with Entertainment Tonight to promote her decidedly non-rom com next project, a thriller series called Homecoming.

In her conversation with the outlet, the longtime rom-com fixture shared that she feels projects like Notting Hill, Pretty Woman, and My Best Friend's Wedding are behind her. Why? Because she finds it difficult to summon the requisite amount of naiveté to play those once-familiar characters. As she told ET:

"There came a point in my career where people thought I had turned on romantic comedies, which — I love them, I love to be in them, I love to watch them. But sometimes, they just don't work at a certain point of life experience."

The 50-year-old quickly clarified that "it's not about age, it's just about what people know that you know," explaining why she's been drawn to weightier fare these days. And while disappointing to hear for rom-com fans, it's hardly surprising. Roberts' acting career stretches all the way back to 1987, when she has her first credit listed on IMDb. The A-Lister was just 19 at the time, and in the three decades since, she's shot over 60 projects, logged multiple producing credits, won one Oscar, been nominated for three more, and even done a brief stint on Broadway.

And that's just her career. She's also had to live her personal life in the spotlight, including a marriage to second husband Danny Moder in 2002. The pair has three children together — 13-year-old twins Hazel and Finn and 11-year-old Henry — whom the couple has largely managed to kept out of the public eye, but being the real-life parent to teenagers makes it understandably hard to slip out of that reality and back into a world of starry-eyed, emotional immaturity, which is almost a prerequisite for a character in a rom-com.

Basically, the actor told ET that she worried about a "disconnect" between the audience and her character, where they found it hard to suspend their disbelief for long enough to enjoy the movie. She's been one of the most famous faces in Hollywood for a long time, with a busy life on all fronts, so it's understandable that Roberts is no longer feeling drawn to characters who are in the process of finding themselves, and stumbling into relationships along the way.

On the contrary, Roberts is very much found, with a solid understanding of who she is in both her career and her personal life, so you can expect her future roles to reflect that. And sadly for us, that means ruling out any new rom-com roles. Unless, she teases, it's as "the parents of the people that are rom-com-ing." Sigh, well, that's something. And, at least we'll always have the Beverly Wilshire.