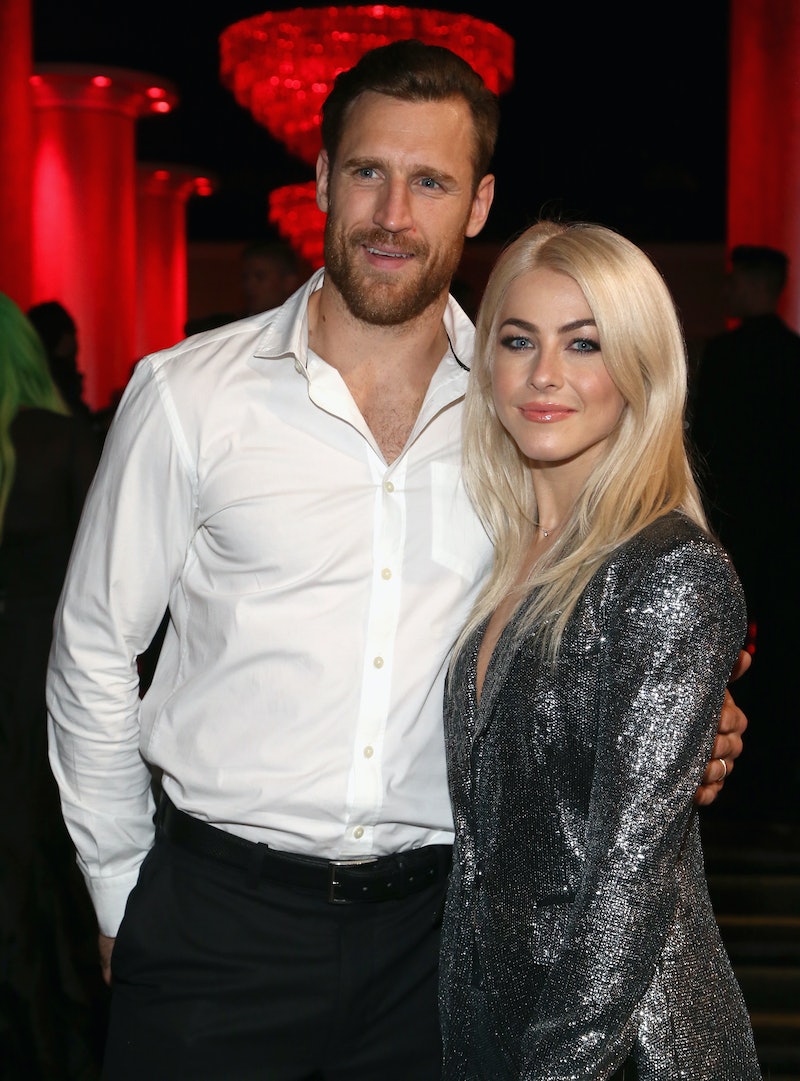 In case you missed it, Julianne Hough came out as not straight in the September issue of Women's Health, and her husband couldn't be more supportive of that decision. As Us Weekly noted, Brooks Laich's Instagram in support of Julianne Hough proves that he's always going to be his wife's biggest supporter.

Laich shared his wife's Women's Health cover, which featured the former Dancing with the Stars pro in a nude, carefree pose, on his own Instagram page on Aug. 1. Based on his caption for the magazine cover, he couldn't be more proud of Hough's openness in regards to such a personal topic. He wrote, "So proud of my wife @juleshough for the woman she is, and her courage to share her journey of trials and triumphs!"

The former NHL player went on to tell his followers that they can learn even more about her self-exploration journey, by writing, "You can learn more about it below, and join the movement she is creating surround personal transformation and growth! Love you so much babe!" Given Hough's statements about her husband in that recent Women's Health issue, it's no surprise to see that Laich would write such a lovely, supportive message in honor of the dancer's major moment.

In Hough's Women's Health feature, she recounted the time when she came out to her husband, and how he's been so supportive as she becomes her true, "authentic self." She recalled, “I [told him], ‘You know I’m not straight, right?’ And he was like, ‘I’m sorry, what?’ I was like, ‘I’m not. But I choose to be with you.’"

Hough did not express a specific label for her sexuality beyond saying that she is not straight. According to experts, it's important that others do not put a label on her in regards to her sexuality, unless she does so herself. After all, based on her interview, it appears as though she's simply enjoying this period of self-exploration, especially with her husband supporting her throughout that journey. She told Women's Health,

“I think there’s a safety with my husband now that I’m unpacking all of this, and there’s no fear of voicing things that I’ve been afraid to admit or that I’ve had shame or guilt about because of what I’ve been told or how I was raised.”

In the interview, Hough also expressed how free it is to simply be her "authentic self" and that her openness has actually had a positive impact on her relationship with Laich, whom she's been married to since 2017. “I was connecting to the woman inside that doesn’t need anything, versus the little girl that looked to him to protect me,” she said, “I was like, ‘Is he going to love this version of me?’ But the more I dropped into my most authentic self, the more attracted he was to me. Now we have a more intimate relationship.”

Clearly, just based on Hough's bold interview and Laich's positive Instagram post about his wife's open statements, the married couple have a relationship that's built on love, understanding, and whole lot of support.

More like this
Hannah Ann Got Engaged 3 Years After 'The Bachelor' & The Proposal Was Dreamy
By Grace Wehniainen
Keke Palmer Shares The Sex Of Her & Darius Jackson's Baby
By Jake Viswanath
'Friends' Star Maggie Wheeler Offers Support To Matthew Perry After Reading His Memoir
By Alyssa Lapid
We Finally Have Some Answers To How Heather Gay Got A Black Eye On 'RHOSLC'
By Samantha Rollins
Get Even More From Bustle — Sign Up For The Newsletter
From hair trends to relationship advice, our daily newsletter has everything you need to sound like a person who’s on TikTok, even if you aren’t.