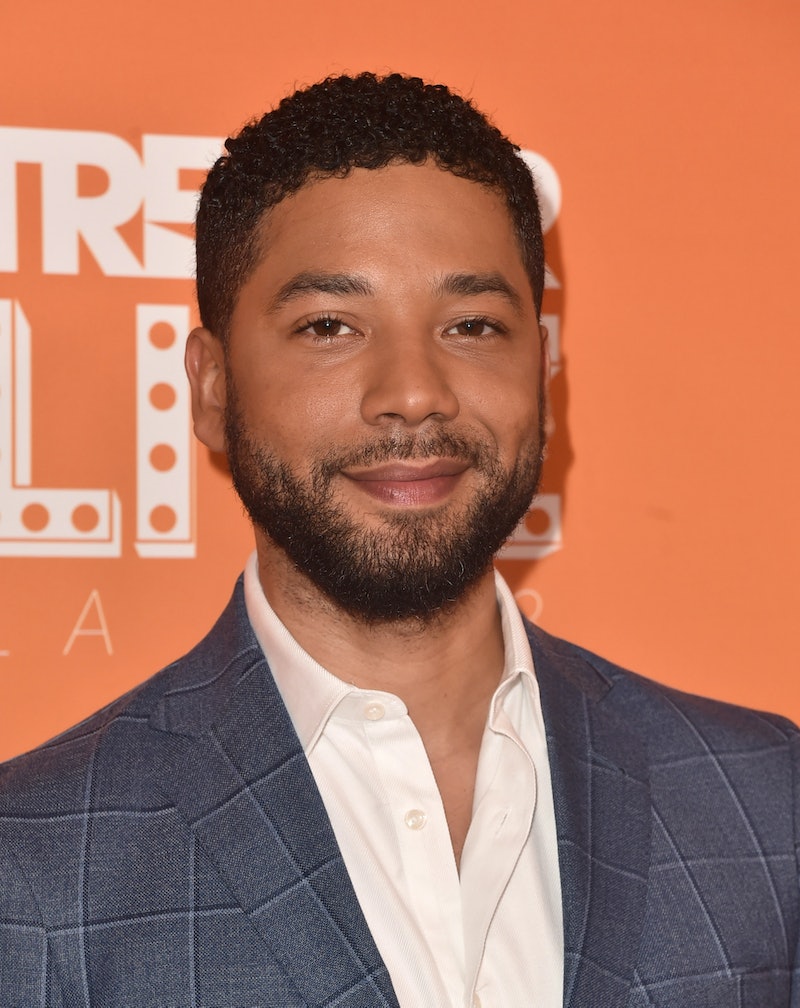 On Friday, Feb. 22, the executive producers of Empire released a statement regarding Jussie Smollett and his future on the series following the actor's arrest for allegedly filling a false police report. According to producers, Smollett will not appear in final two episodes of the season, to avoid "disruption on set." The statement, which was signed by executive producers Lee Daniels, Danny Strong, Brett Mahoney, Brian Grazer, Sanaa Hamri, Francie Calfo, and Dennis Hammer, comes on the heels of Smollett's arrest on the morning of Thursday, Feb. 21. The statement obtained by Bustle reads as follows:

“The events of the past few weeks have been incredibly emotional for all of us. Jussie has been an important member of our EMPIRE family for the past five years and we care about him deeply. While these allegations are very disturbing, we are placing our trust in the legal system as the process plays out. We are also aware of the effects of this process on the cast and crew members who work on our show and to avoid further disruption on set, we have decided to remove the role of ‘Jamal’ from the final two episodes of the season.”

Smollett was released on $100,000 bond following a court hearing Thursday afternoon. He was charged with multiple felony charges, including disorderly conduct, all stemming from an alleged assault in late January, according to Deadline. On Tuesday, Jan. 29, it was reported that the actor was a victim of an allegedly "racially-charged assault and battery," according to a statement released by the Chicago Police Department at the time. Three weeks after the alleged assault took place, Smollett was arrested for allegedly filing a false police report.

Following the announcement of the charges against him, Smollett's lawyers released a statement to CBS, explaining:

“Like any other citizen, Mr. Smollett enjoys the presumption of innocence, particularly when there has been an investigation like this one where information, both true and false, has been repeatedly leaked. Given these circumstances, we intend to conduct a thorough investigation and to mount an aggressive defense.”

After Smollett's arrest, the Chicago Police Department gave a press conference in which Superintendent Eddie T. Johnson alleged that the actor faked his own assault because "he was dissatisfied with his salary" on the Fox series. Police additionally claimed that the actor paid two men $3,500 to stage the alleged Jan. 29 assault.

Per The New York Times, Johnson claimed, "Smollett took advantage of the pain and anger of racism to promote his career." He added, "This publicity stunt was a scar that Chicago didn't earn, and certainly didn't deserve."

It was reported, as late as Wednesday, that Smollett would not be written out of Empire, according to The New York Times. However, it seems that show's producers may be changing their tune in light of recent developments. Smollett's appearance on future seasons is also uncertain. As Empire's statement only said that they are placing "trust in the legal system as the process plays out."

As the series continues to wrap its fifth season, it's unclear how they will handle Smollett's character, Jamal Lyon's disappearance. However, it is now apparent that the show will go on without him — for now.