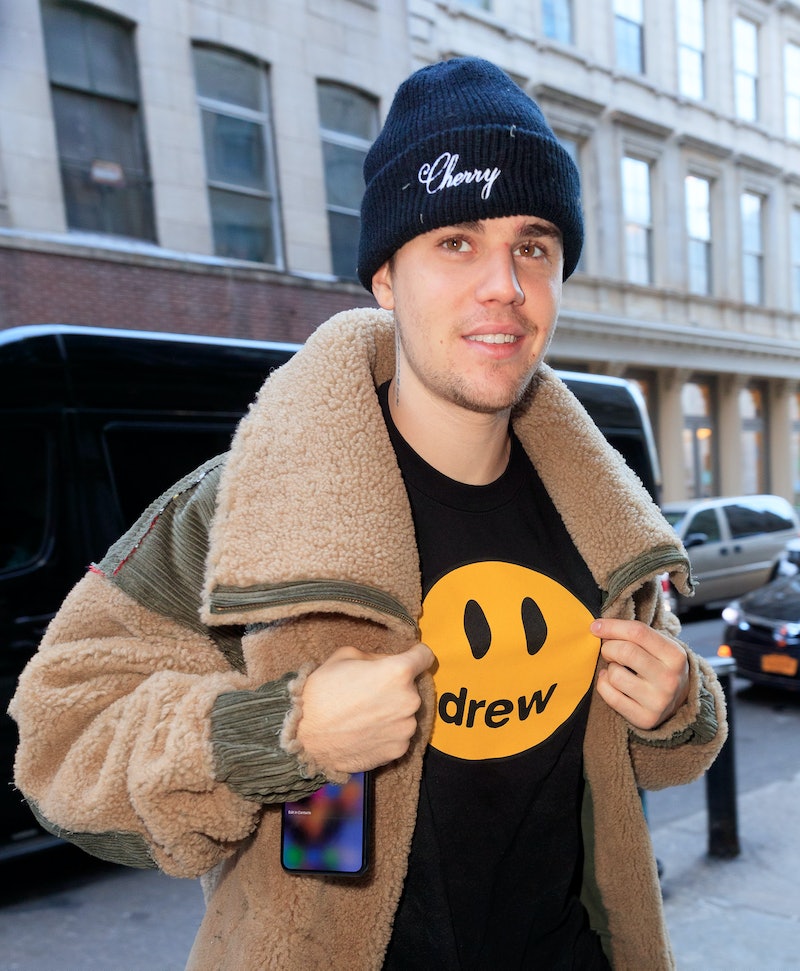 Forget New Years' resolutions — Justin Bieber is looking to do some self-improvement before 2019 is even over. In a post on Instagram taking a stand against racism, Justin Bieber apologized for past "uneducated" remarks, as part of his quest for self-improvement this holiday season. The singer, who has been taking a break from making music in order to focus on his mental health, shared a post on social media on Tuesday, Dec. 3, where he revealed that he was hoping to "take ownership" of his flaws.

"I'm determined this holiday season to take ownership of all my shortcomings and work on them for myself and the ones I love!" Bieber wrote on Instagram, alongside an illustration of a Christmas tree bearing the logo of his Drew House fashion line. "What is your goal?" It seems that the singer immediately set to work on that goal, as he followed up with a post about an art auction that he and wife Hailey Baldwin curated in collaboration with LIFT Los Angeles and Inner City Arts, as well as a post apologizing for his past behavior.

"When I was young I was uneducated and found myself saying really hurtful things not knowing the power of my words," Bieber continued in a separate Instagram post, below a photo bearing the words "Stand Against Racism." He continued, "Racism Is still very prevalent and I want to use my voice to remind we are all human being and all of EQUAL VALUE BEFORE GOD!"

While Bieber's apology did not make any specific references to past incidents, in 2014, when the singer was 20, two clips of a 14-year-old Bieber saying the n-word surfaced in the same week. According to TMZ, the first clip featured the singer making a racist joke, while in the second, he changed the lyrics of his song "One Less Lonely Girl" to include the slur. Shortly after the videos surfaced, Bieber publicly apologized for his behavior, stating that "as a kid, I didn't understand the power of certain words and how they can hurt," and that he "thought it was ok to repeat hurtful words and jokes," per E! News.

"I apologize for offending or hurting anyone with my childish and inexcusable mistake," Bieber said in the 2014 statement. "Ignorance has no place in our society and I hope the sharing of my faults can prevent others from making the same mistake in the future."

In the years since, the singer has been very open about his quest for self-improvement, revealing in a March Instagram post that he had been "struggling" and that he hoped being open about that would inspire his fans. "Been struggling a lot. Just feeling super disconnected and weird," Bieber wrote, alongside a photo from his Purpose World Tour. "I always bounce back so I’m not worried just wanted to reach out and ask for your guys to pray for me." He also added that he had been "facing my stuff head on," during his break from the spotlight.

Later that month, Bieber revealed that his focus on mental health had taken priority over making new music, despite fans' asking for him to release another album. "Music is very important to me but Nothing comes before my family and my health," he wrote on Instagram.

Based on his latest Instagram posts, it seems that Bieber is determined to continue putting his mental health and growth first this holiday season, rather than waiting for the new year to make a major change.