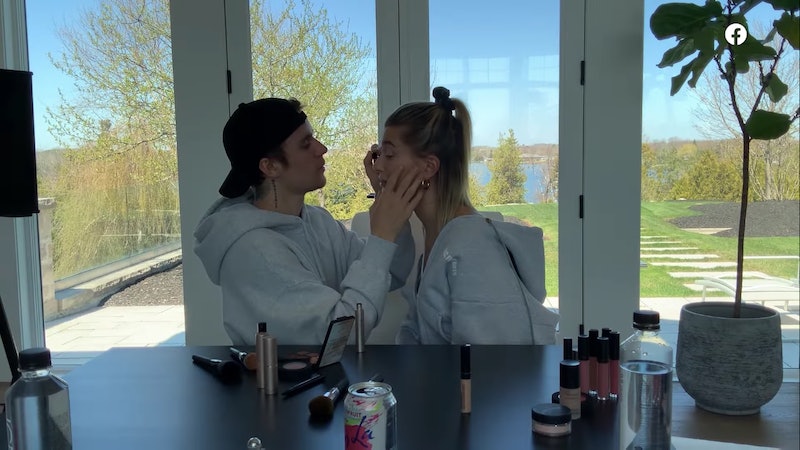 The "boyfriend does my makeup" trend is alive and well among celebrities who are social distancing. Lana Condor and her boyfriend recently posted a video on Youtube, and now, Justin Bieber did Hailey's makeup on Facebook Watch. Turns out, he's pretty good at it.

The Biebers have their own series on the social media platform, and in the latest episode, Justin is tasked with applying his wife's makeup and making her into "the most beautiful lady in the world, obviously."

The challenge begins as Hailey asks Justin what product comes first — and he actually knows that it's foundation: "You have to lay the foundation," he says. From there, things go pretty smoothly... until the pair reach Hailey's mascara.

Although the application itself goes relatively well, Justin ends up getting spots around his wife's eyes, so he goes back in with foundation to cover them — and then he decides to add the product to her eyebrows, causing Hailey to laugh and ask him what he's doing. Justin just smooths it in with his finger and sings, "Blend it, blend it, got to go and blend it."

"That's a nice makeup song," Hailey tells him before they finish up the rest of her face.

As for the final result? According to Hailey, "It's actually pretty good."

More like this
J.Lo's Micro-French Manicure Has A Fun, Sparkly Twist
By Olivia Rose Rushing
Hailey Bieber's New Bob Is Short Haircut Goals
By Olivia Rose Rushing
Kim K, Oprah, & Jennifer Lopez Celebrated 25 Years Of Anastasia Beverly Hills
By Olivia Rose Rushing
The Best Beauty Looks Spotted At Paris Couture Week 2023
By Audrey Noble
Get Even More From Bustle — Sign Up For The Newsletter
From hair trends to relationship advice, our daily newsletter has everything you need to sound like a person who’s on TikTok, even if you aren’t.