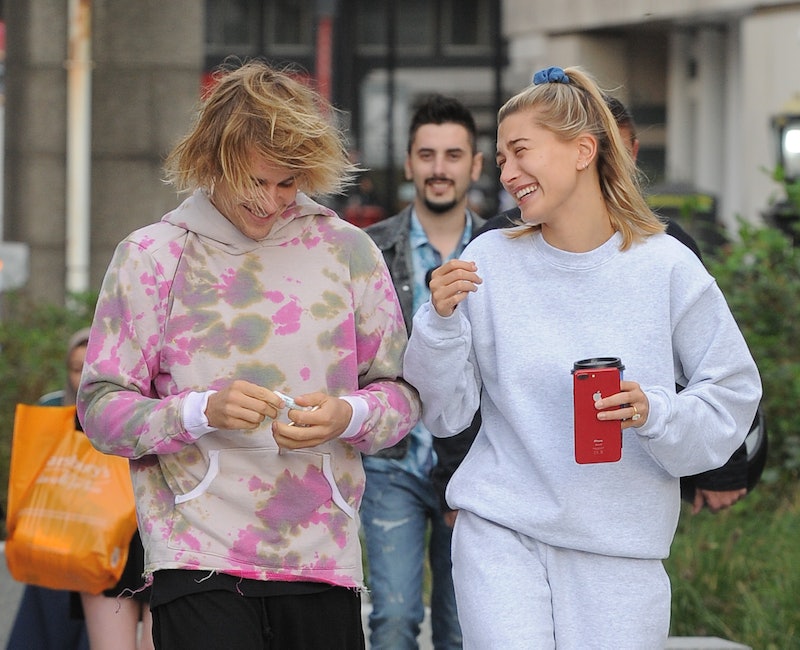 After weeks of rumors — some of which were fueled by the couple themselves — Justin Bieber and Hailey Baldwin are addressing pregnancy speculation head-on, as pointed out by E! News. They made it very clear: No, they're not expecting a child at this point in time.

In an Instagram Story video posted Thursday, the "Sorry" singer showed a screen featuring a Daily Telegraph headline that read, "Justin Beiber [sic] WALKS OUT On Hailey Baldwin Who Is Allegedly Pregnant!" In the background of Bieber's video, Baldwin can be heard saying, "How dare you walk out on me and my very pregnant belly? Not!" Bieber also called out the outlet for misspelling his name, writing, "How are you gonna spell my name wrong after all these years ?? Haha."

These two seem to have had enough of the speculation, so they're having their own fun with the more ridiculous rumors out there. And while it's their business if and when they do get pregnant, it's clear that Bieber has no plans to "walk out" on his wife anytime soon.

Still, it shouldn't come as a huge surprise that people are talking about the possibility Baldwin could be pregnant. The couple themselves made a fake pregnancy announcement for April Fool's Day, even sharing an Instagram photo of Baldwin at what looked like a doctor's visit. Bieber later apologized for the prank, though, which some called insensitive toward people with fertility struggles.

And while the newlyweds are leaning into the pregnancy rumors with their new post, some fans also noticed something else about the video. On the background of Bieber's iPad, which showed the Daily Telegraph article, it looked like the video for Selena Gomez's song "Taki Taki" was open in another tab.

A fan account, @JBCrewdotcom, shared screenshots of comments that Bieber apparently left on Instagram about the "Taki Taki" situation. He claimed that "Taki Taki" came up as a related video after he and Baldwin watched his own Coachella performance. (However, it's a little hard to track down where exactly Bieber posted these comments.)

"The video of selena singing taki taki came up after my wife and I watched my coachella performance," Bieber wrote, according to the fan account. In a separate screenshot, he asked fans to "stop reading into things so much and making something out of nothing."

"You little internet kiddos need to learn how to move on for real," Baldwin reportedly wrote in her IG Story. "We're adults that have better things to do than waste time explaining something just so you can stop your delusional fantasies." She ended the post by reminding her followers that the people speculating about why Bieber might've watched the video are just "strangers," while the two of them are actually married.

In terms of rumors, Bieber and Baldwin fanned the rumor flames with their April Fool's joke. And while the "Taki Taki" video probably wasn't something they expected to come up with the new post, it's clear that fans aren't going to stop analyzing the couple's every move. They're probably going to keep facing rumors (and, unfortunately, gossip about Gomez) in the future, too, so at least they're trying to handle it with humor. But if their new comments are any indication, it's best not to read too much into any of the couple's Instagram posts.