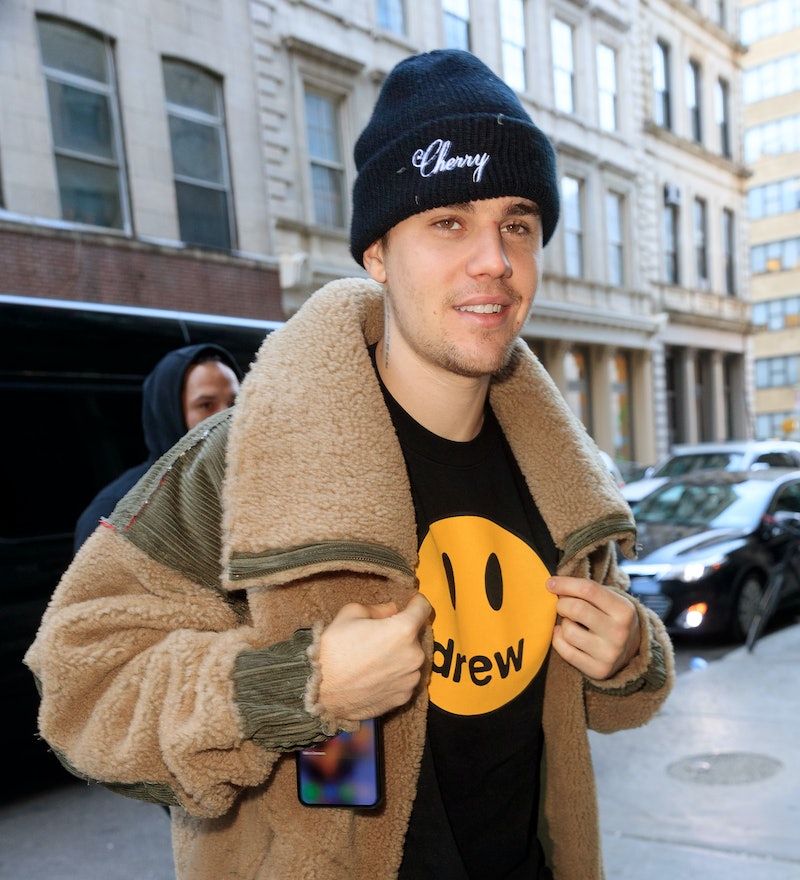 New year, new music from the Biebs himself. Four years after releasing his last solo record, Justin Bieber released his new single, "Yummy" on Friday, January 3, and the R&B-tinged track appears to be a steamy ode to his wife, Hailey Bieber. In the song — which was accompanied by a lyric video featuring pink soft serve spiraling into a cone — Bieber sings about his partner being "number one" and teases that she is his other half in all ways.

"Fifty-fifty, love the way you split it / Hundred racks, help me spend it, babe," Bieber sings, before things take a turn for the steamy side with lines like, "Rollin' eyes back in my head, make my toes curl / Yeah, you got that yummy-yum." Later, in the bridge, Bieber makes it clear that he's enjoying life as a married man, singing "Hop in the Lambo', I'm on my way / Drew House slippers on with a smile on my face / I'm elated that you are my lady."

Bieber began teasing his new single before the new year, when the track appeared in the trailer for his upcoming YouTube documentary series, Justin Bieber: Seasons. The singer also started a countdown on his Instagram account beginning on Dec. 30, and even created a TikTok account for fans to follow, where he posted videos of himself singing and dancing to his newest release.

"Yummy" is the first track from Bieber's upcoming album, the making of which will be chronicled in the docuseries. On Christmas Day, Bieber announced that his fifth studio album will arrive in 2020 with a video on YouTuber, where he teased that his new music will be unlike anything he has released before. "I feel like this is different from previous albums just because of where I am in my life," he says in the video, which shows the singer wandering around the desert. "I’m excited to perform on the tour."

In the video — as in the trailer for Justin Bieber: Seasons — he explains that he is in a better place than he has been in years. "As humans, we are imperfect," he said. "My past, my mistakes, all the things I have been through. I believe I am right where I am supposed to be and God has me right where he wants me."

He also added that his upcoming album is his favorite project yet. "We all have different stories, I’m just excited to share mine," Bieber said. "It’s the music that I’ve loved the most out of anything I’ve done."

While Bieber has teased that his new music will be "different" from any of his earlier music, he hasn't dropped any clues about what his fifth album will be titled. However, some fans have speculated that the singer has subtly revealed it with his latest tattoo; in early December, Bieber posted a photo of the word "Forever" inked on his neck. Beliebers pointed out that the singer has tattooed the name of two of his earlier albums — Purpose and Believe — on his body, which means that his newest ink could be a nod to the upcoming release.

TMZ sources also claimed that Forever is in contention to be Bieber's album title in a recent article reporting that the singer is planning to drop his new music in March. Regardless of whether or not the album does come out this spring, it's clear that Bieber is proud of all of his new music, and is returning to the spotlight in a way that puts his mental health and happiness first.