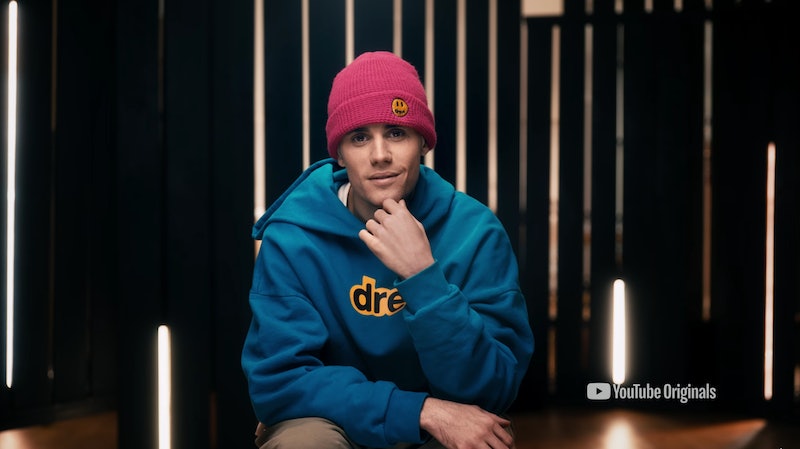 Almost three years after he abruptly cancelled the end of his Purpose World Tour, Justin Bieber is ready to return to the spotlight — and tell his side of the story in the process. On Tuesday, Dec. 31, Justin Bieber announced a YouTube documentary and new music by releasing the first trailer for the 10 part series, Justin Bieber: Seasons. In addition to chronicling the process of making his fifth studio album, the documentary will also give fans their first listen at some of Bieber's new songs, including the track "Yummy," which is featured in the trailer.

In a press release obtained by Bustle, the series is described as a "raw, powerful and intimate look at Bieber's process of creating new music and the motivation for this new album told through the lens of his closest confidants, friends, collaborators and Bieber himself," including his longtime manager Scooter Braun and his wife, Hailey Bieber. As well as studio footage and revealing interviews, the docuseries will also feature "never-before-seen footage of his wedding" and "his day-to-day alongside those in his inner circle."

Justin Bieber: Seasons also promises to reveal the truth about his decision to retreat from the spotlight and explore the effects of growing up in the public eye has had on him, now that he's an adult. "Do you want to start by talking about the last four years?" a voice asks Bieber at the very beginning of the clip, to which the singer simply responds, "Wow." The trailer then shows news clips from Bieber's decision to cancel the Purpose Tour, and his loved ones describing him as a "shell of himself."

"There's a lot pressure that I think people don't see," Hailey says at one point, alongside footage of Bieber recording and playing his new music in the studio. "Maybe by watching this, people will get a glimpse into his world." Based on the short footage clips in the trailer, it seems like Seasons will be an unflinching look at the toll that all of that pressure has put on Bieber over the years, since, as Braun says, "nobody in the history of the world has grown up like Justin Bieber."

Despite the trailer's focus on Bieber's stresses and his decision to retreat from the spotlight, Seasons also teases that the singer is in a happier, more stable place than he's been in quite some time. "This album is different because of where I am in my life now," Bieber says, as the trailer contrasts old concert footage of Bieber with more recent clips of him singing to Hailey. Those moments seem to underline some of Bieber's earlier comments that he would wait until he was feeling his best to release new music, including his March Instagram post where he explained that his health was his biggest priority.

"I’ve toured my whole teenage life, and early 20s, I realized and as you guys probably saw I was unhappy last tour and I don’t deserve that and you don’t deserve that," Bieber wrote at the time. "I am now very focused on repairing some of the deep rooted issues that I have as most of us have, so that I don’t fall apart, so that I can sustain my marriage and be the father I want to be. Music is very important to me but Nothing comes before my family and my health."

Based on the trailer, Justin Bieber: Seasons will allow him to make his return to the spotlight on his own terms, with everything he thinks fans need to know about where — and who — he is now. The 10-part series will premiere on January 27, 2020 on YouTube.

More like this
Austin Butler Recalls Lisa Marie Presley Showing Him Elvis’ Bedroom
By Jake Viswanath
You’ll Definitely Recognise Isadóra Bjarkardóttir Barney’s Mum
By Maxine Harrison
Lisa Marie Presley's Secret Granddaughter Was Revealed At Her Funeral Out Of Nowhere
By Jake Viswanath
The Meaning Of Steve Lacy’s “Bad Habit” Lyrics
By Radhika Menon
Get Even More From Bustle — Sign Up For The Newsletter
From hair trends to relationship advice, our daily newsletter has everything you need to sound like a person who’s on TikTok, even if you aren’t.