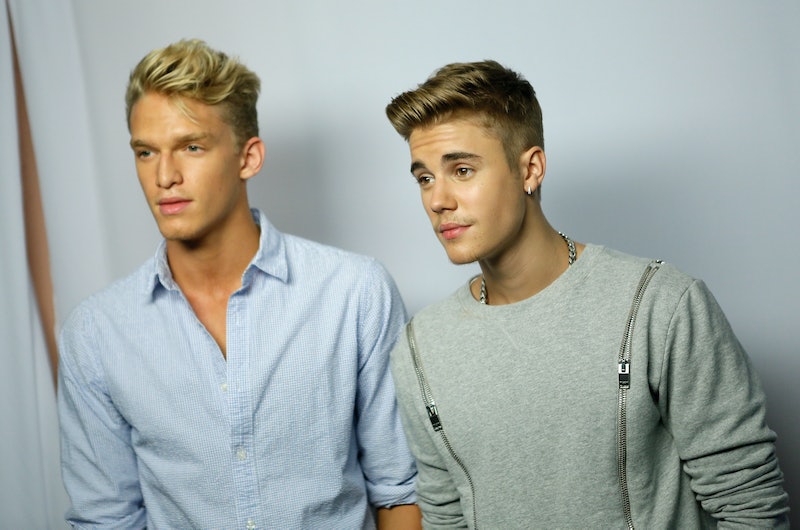 Justin Bieber, Hailey Baldwin, Miley Cyrus, and Cody Simpson have all dominated the celebrity news cycle lately, thanks to their high-profile relationships. The first couple recently wed (for the second time), while the other is just starting out. And now, Bieber wants to double date with Cyrus and Simpson, according to a recent Instagram exchange. These four have plenty of history together, so it's not actually as random as it sounds.

The whole situation began when Simpson posted a shirtless photo on Instagram, which prompted his longtime pal, Bieber, to comment with a jokey, "ur body is a wonderland." The "Sorry" singer followed that up by asking Simpson if he was down for a double date (with Baldwin and Cyrus, of course). In turn, Cyrus' new beau responded with a simple, "text me."

If the double date does happen, this wouldn't be the first time Bieber and Simpson hung out — their friendship goes back years. In 2015, Bieber, Simpson, and fellow singer Niall Horan all got together for a mini jam session that they documented on Snapchat. And inAugust 2017, the Australian musician told Stellar Magazine that Bieber has been like a mentor to him and that he can always count on him to share any much-needed advice regarding the entertainment industry.

Baldwin and Cyrus are also friends, sharing last year on Carpool Karaoke that Baldwin has known the “Slide Away” singer since she was 11. Cyrus is good friends with the model’s older sister, Alaia, who would team up with Cyrus to tease and prank her younger sister back when they were kids.

Cyrus and Bieber have also been in each other's lives for quite awhile, including professionally. According to Billboard, the musicians go as far back as 2010 when they performed "Overboard" at Madison Square Garden during Bieber's My World 2.0 tour. In summer 2013, Bieber and Cyrus hung out pretty regularly, even sparking some dating suspicion of their own — until Cyrus, who was engaged to Hemsworth at the time, called the romance rumors "impossible."

Despite being seemingly close friends, Cyrus didn’t attend Bieber and Baldwin’s recent wedding. The couple tied the knot for the second time in South Carolina on Sept. 30, and even though Cyrus wasn’t there, celeb friends like Kendall Jenner, Jaden Smith, and Dan+Shay showed up for support.

Before Bieber started flirtatiously posting about Simpson, Cyrus did, which is what further fueled rumors that the pair was dating. They're also labeling their relationship, supposedly, since Cyrus referred to Simpson as her "BF" on Instagram when he visited her in the hospital following surgery for tonsillitis.

Given all of their history, Bieber, Baldwin, Cyrus, and Simpson going on a double date soon seems like a very real possibility. If and when that does happen, you'll probably see the whole thing chronicled on their Instagram Stories.

More like this
Justin & Hailey Bieber's Bond Is "Unbreakable" Amid His Ramsay Hunt Diagnosis
By Bustle Editors
Selena Gomez Is Fine Being Single, But She Still Manifested Romance On 'SNL'
By Martha Sorren, Jake Viswanath and Jack Irvin
Martin Hancock’s Wife Played A Key Part In His Return To 'Coronation Street'
By Catharina Cheung
Kendall Jenner & Devin Booker Reportedly Broke Up After 2 Years Of Dating
By Jordyn Tilchen
Get Even More From Bustle — Sign Up For The Newsletter