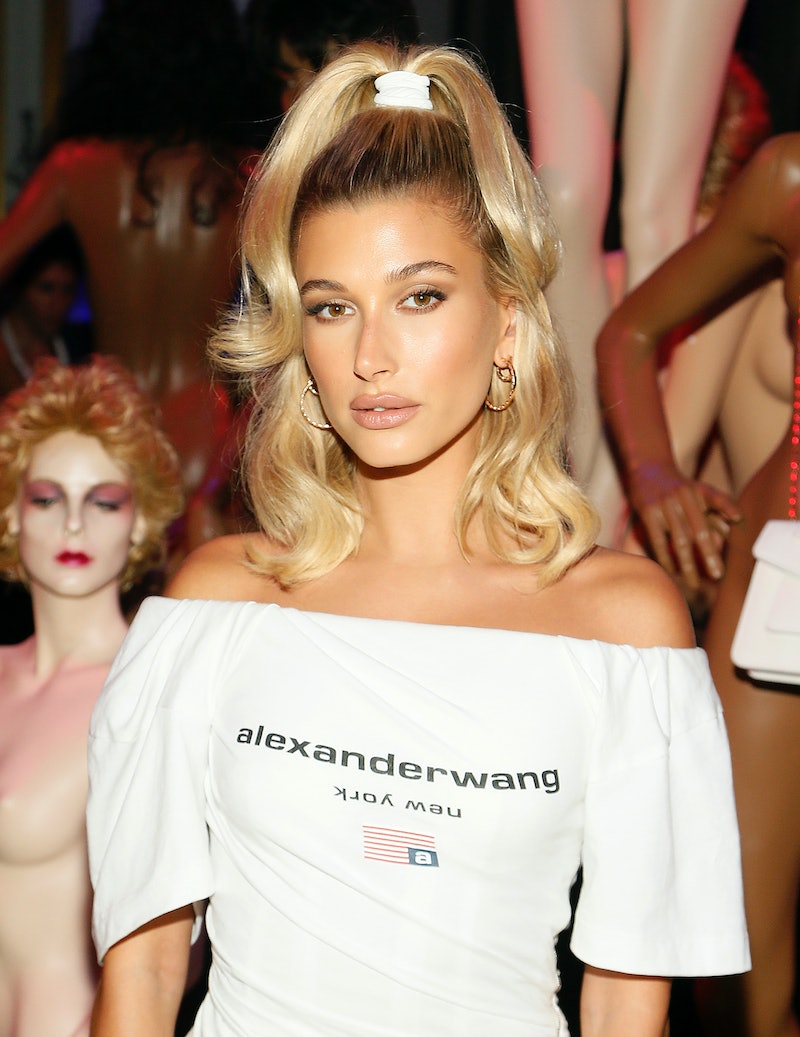 By this point, you've definitely heard that this celebrity couple said "I do" all over again. Now, it's time to discuss all the key details about Hailey Baldwin and Justin Bieber's second wedding. This ceremony happened a little over a year after they wed at a New York City courthouse last fall. Not long after that first ceremony, People reported that Baldwin and Bieber would have a "big blowout" later on with loved ones — and that's exactly what happened.

Prior to re-exchanging vows, Baldwin and Bieber celebrated their anniversary on Friday, Sept. 13. With their first wedding, they kept most details under wraps. But after lots of speculation, Bieber confirmed they'd gotten married in a lengthy Thanksgiving 2018 post, where he wrote, "Happy late thanksgiving to everyone. First thanksgiving as a married man, first time hosting thanksgiving. First time both sides of the family has come together."

While their second wedding was supposed to happen even sooner, they postponed plans so Bieber could focus on his mental health, according to People. After taking that break, the two dove back into wedding plans once more. From the famous guest list, to their attire, to the location, Bieber and Baldwin's special day sounds unforgettable, so let's dive into those details.

Where & When Did Baldwin & Bieber Get Married?

Baldwin and Bieber tied the knot on Monday, Sept. 30 at the Montage Palmetto Bluff in Bluffton, South Carolina. Entertainment Tonight reported that famous event planner Mindy Weiss, who's worked with the Kardashians on multiple occasions, helped the couple plan their nuptials.

Like many celebrity brides, the 22-year-old opted to have more than one gown. According to Us Weekly, Baldwin wore two wedding dresses. During the ceremony, she wore a strapless gown and a long veil. Us reported that Baldwin changed into a white halter gown and pulled her hair into a low bun for the rest of the evening. Baldwin was also spotted wearing a leather jacket with the word "wife" embroidered on the back.

Who Was In The Wedding Party?

It doesn't appear they had a huge wedding party. E! News reported Baldwin's sister, Alaia Baldwin and her cousin, Ireland Baldwin, were both bridesmaids. Her father, Stephen Baldwin, walked her down the aisle. According to People, her uncle, Alec Baldwin, and his wife, Hilaria Baldwin didn't come to the wedding, as they were in the Hamptons. As for Bieber's side of the family, his mom, Pattie Mallette, and his father, Jeremy Bieber, supported him.

Their guest list included 154 people, per People. Of course, many celebrities were reportedly part of that list, including, Kris Jenner, Corey Gamble, Kylie Jenner, Travis Scott, Stormi Webster, and Kendall Jenner. Kendall brought Fai Khadra as her date, but clarified on Instagram that they're just friends.

Prior to the vows, People reported guests were treated to a pre-ceremony cocktails at the Inn lobby lounge. There was also a post-ceremony cocktail hour, which was followed by a formal plated dinner reception inside the Wilson Ballroom. The tables had customized Moët & Chandon Imperial Bruit bottles covered with Swarovski crystals, as Kylie showed on Instagram (above). Grammy winner Daniel Caesar also performed at the reception, according to People. Sources who were at the wedding informed TMZ that Bieber even performed with Dan + Shay.

What Special Touches Did The Wedding Include?

Before the wedding, the couple made sure guests had a memorable time. According to TMZ, Baldwin and Bieber showed The Notebook during their rehearsal dinner. Sources said that the couple threw a carnival-themed sleepover for family and friends on Sunday, Sept. 29. In addition to watching the movie starring Ryan Gosling and Rachel McAdams, they played capture the flag, ate ice cream and candy, had a dance party, and bowled. Apparently, they even had a big water fight at one in the morning.

What Gifts Did They Receive?

It's unclear if they received any wedding gifts, but Bieber bought himself a new watch prior to this big day that he shared on Instagram. According to ET, the watch is designed by Audemars Piguet and possibly ranges in price anywhere from $30,000 to $50,000.

The next step for Bieber and Baldwin is to take a honeymoon. Sources told People that they'll be "taking a break" and doing exactly that. Further details, like a location, remain unknown. But just like with their wedding. Bieber and Baldwin will likely share honeymoon photos all over Instagram, so fans will just have to keep an eye out.