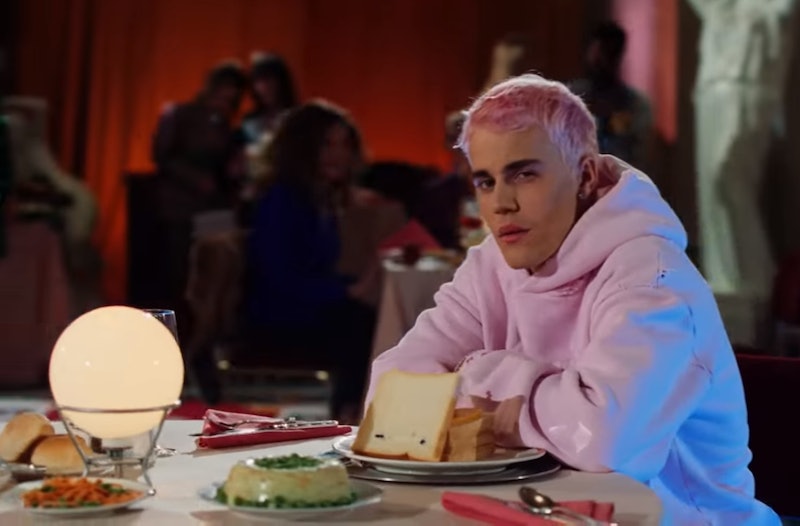 True Beliebers received yet another treat on Saturday, when Justin Bieber released a music video for "Yummy." The video comes just one day after the singer revealed that he'll be releasing a new album, going on tour, and premiering a a 10-part documentary series on YouTube all in 2020. But as exciting as his flurry of music related news was, nothing can top the surreal nature of the "Yummy" music video, which among other things, includes a standout cameo from one of Bieber's cats (no word yet on whether it was Sushi or Tuna who had the honor of appearing in their dad's eccentric foodie masterpiece).

"Yummy" is Bieber's first single in four years, and the R&B influenced bop seems to be ushering in a new era for the singer. Based on the steamy lyrics, the song appears to be an ode to Bieber's wife, Hailey Baldwin, but there's no hint of her or anything resembling romance in the actual video. Instead, the "Baby" singer offers up a '70s style pastel nightmare of a dinner party. There's a giant, green Jell-O mold filled with what looks to be peas, congealed pink mystery dishes, and some sort of sandwich that consists of nothing more than four slices of bread, a piece of cheese, and olives arranged to look like a face. Add in a wide array of retro guests including a man who looks suspiciously like the Six Flags guy, and you've got a recipe for weirdness.

But then like a beacon of cuteness, one of Bieber's cats wanders across the table to sniff at the strange buffet before them.

In August 2019, Justin and Hailey welcomed two Savannah cats into their home — brother and sister, Sushi and Tuna. While it's hard to read the I.D. tag on the kitten in the video, the blue collar suggests that Tuna is the scene-stealing star of "Yummy" (on the cats' official Instagram, Tuna wears blue, while Sushi usually rocks red).

Beliebers seem to love every part of Bieber's food-themed video, but his cat's cameo is earning extra praise on Twitter. One fan tweeted, "@justinbieber putting his cat in the Yummy music vid is everything," while another fan called the cat's inclusion all-caps "iconic." Twitter user @renateaah added, "Yummy ft. Tuna is AMAZING!! Love it @justinbieber #YummyMusicVideo."

His musical comeback may just be beginning, but by making the "Yummy" video a family affair, the new era of Bieber is off to a promising start.

More like this
Twitter Is In Awe Of Taylor Swift’s “Lavender Haze” Music Video
By Jake Viswanath
Zach Gilford Admits He Forgot Taylor Swift's Name When He Starred In Her Music Video
By Jake Viswanath
Hailey Bieber Went Pantsless In A Hoodie By Justin's Brand Drew House
By Dominique Norman
8 Easter Eggs From Taylor Swift's “Lavender Haze” Music Video
By Shahed Ezaydi
Get Even More From Bustle — Sign Up For The Newsletter
From hair trends to relationship advice, our daily newsletter has everything you need to sound like a person who’s on TikTok, even if you aren’t.