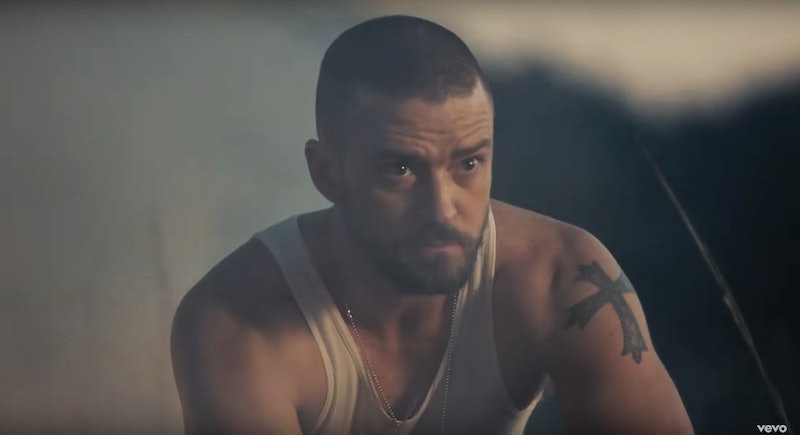 By now, you've hopefully acquainted yourself with the trailer for Justin Timberlake's new album Man Of The Woods. And the many glorious memes that followed — fans might have been laughing along, but they are officially hyped. And on Wednesday, Timberlake raised their excitement further by tweeting that "Filthy," the first single from his new album, will be released at midnight on Friday, Jan. 5. He also added that the song will be "1 of 4," with Entertainment Weekly sharing that three additional songs and music videos will be released on a weekly basis in the lead-up to the Feb. 2 release of Man Of The Woods, starting on Jan. 18. But "Filthy" will be the one to lead the charge, thus setting the tone for the next three releases.

As such, it feels reasonable to assume that this song is going to be a big deal. Man Of The Woods is Timberlake's first album since 2013's The 20/20 Experience, so he likely wants a first single that makes a big impact the second it's released. The fact that Timberlake suggests that "Filthy" is a song that "should be played very loud" lends itself well to this idea. Clearly, he's coming back big for this one. And he wants the whole world to hear it. Keeping that in mind, it's interesting to speculate upon what "Filthy" might actually sound like. Especially in regard to what Timberlake has already revealed about the album from the aforementioned trailer. And actually, fans might have already heard a snippet of the song without even knowing it.

But before getting into that, we need to get grips with what "Filthy" could possibly be referring to.

It's tempting to assume that "Filthy" will be one of Timberlake's sexy-takes, and let's be honest, that's something that he's always thrived at delivering. But the song could potentially delve a little deeper than that. Consider, then, that Timberlake states at the start of the trailer how Man Of The Woods is inspired by his family and his hometown. "It's personal," he divulges while images of him roaming around in a blanket by a campfire flash up on screen. A little later, a female voiceover (who is probably his wife Jessica Biel) describes what we're left to assume is the sound of the album. "It feels like mountains, trees, campfires," she explains, "like wild west, like now."

As anyone who has actually spent any time around campfires, mountains, trees, and indeed the wild west can attest, the great outdoors can be beautiful and humbling, but it can also get you pretty filthy — which is actually half the fun. However, the word filthy within this context could also be evocative of someone who is willing to get their hands dirty, put in some hard work, and reap the sweet rewards of doing so. You know, like what you'd expect of a self-proclaimed man of the woods. So, essentially, this song might be the sound of a man celebrating the hard work of his return while embracing his roots — right down to the mud.

It's interesting to note that in February 2017, Timberlake expressed to The Hollywood Reporter what Man Of The Woods will sound like and said, "it's Memphis. It's Southern American music. But I want to make it sound modern." In the Man Of The Woods trailer, there are two excerpts of what could be a single or several songs playing. The first has a distinctly traditional Memphis sound with a vocal line that appears to state something about "saints" and "sinners." The second, however, feels like a far more modernized take with Timberlake stating that he wants "it all on the table," before a distinctly Neptunes-esque breakdown takes the song to a whole new level.

It would make sense that Timberlake would preview the first single from the album in this trailer, especially as the two have been released in the same week as each other. So it could well be that we've already heard a snippet from "Filthy" right there in the trailer. And when you consider that the song was produced by frequent Timberlake collaborator, Timbaland and Danja (who has previously worked his magic on Britney Spears' "Gimme More"), you can definitely hear such influences in that preview.

Here's hoping that "Filthy" makes fans feel as though they've spent a week in the great outdoors themselves when it finally drops on Friday.