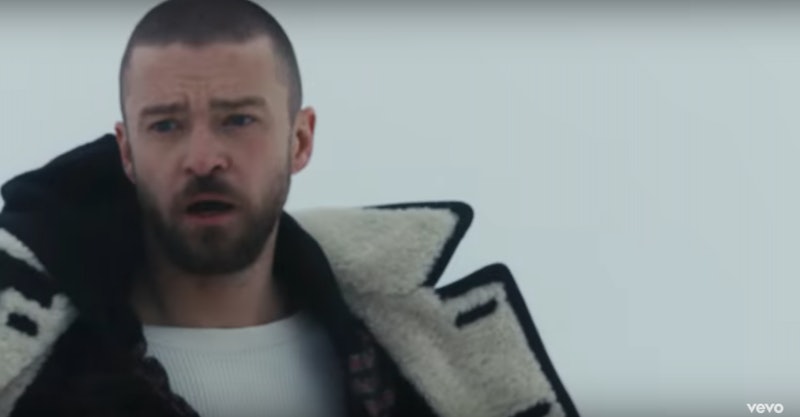 After bringing sexy back, Justin Timberlake is now ready to... bring camping back? On Tuesday, Timberlake teased his new album Man Of The Woods with a YouTube video that must be seen to be believed. In the teaser for his first album in nearly five years, the singer is, well, a man of the woods, stomping through the snow and swimming in a lake. More importantly, though, the clip announces the release date for Timberlake's new album, and it's surprisingly soon. Though, it not so surprisingly comes out right before Timberlake headlines the 2018 Super Bowl Halftime Show.

The singer will return with his new album on Feb. 2, two days before he makes his Super Bowl debut. But, for those that can't wait that long, new music will come even sooner. Timberlake will release the first single off Man Of The Woods Friday, Jan. 5. He doesn't reveal the title of song that he'll drop later this week, but he does give fans a sense of what this album will be about.

Man Of The Woods, he says, is really inspired by his 2-year-old son, Silas and his wife, Jessica Biel, both of whom show up in the minute-long teaser for the record. But, he says, more than any of his previous albums, this one is about where he's from. The Memphis, Tennessee-born singer is going back to his roots, quite literally, as he shows in scenes of him sitting in a cornfield and posting up by a campfire. "It's personal," he says in the video's voiceover.

If you needed more information on the album, Timberlake has some of his closest confidantes giving their two cents on what he's created. "It feels like mountains, trees, campfires," Biel says. "Like Wild West. Like now." Soon Pharrell — who co-produced more than half of Timberlake's 2002 debut solo album, Justified with his N.E.R.D. partner Chad Hugo and teased last year that he was in the studio with Timberlake again — is heard saying: "It feels so earthy. It's just where you are in your life right now."

As Spin pointed out, it's been rumored for the last two years that the pop star was going to pull a reverse Taylor Swift, going country with his new music. From the sounds of this teaser, it appears that he will dabble in a more rootsy genre, or perhaps an indie one. The snippets of songs heard in the clip have Timberlake channeling his inner Bon Iver. The first album from Bon Iver's Justin Vernon, For Emma, Forever Ago, had him heading out to a cabin the woods of Wisconsin for inspiration.

Timberlake might have also listened to Bon Iver a few times before taking his own trip to the woods, since one of the songs teased here features falsetto, not unlike like what you'd hear on a Vernon track. Bon Iver's record label Jagjaguwar certainly thought so, tweeting, "Listens to For Emma once."

Of course, Timberlake has gone country before, turning up at the Country Music Awards in 2015 to perform The 20/20 Experience song "Drink You Away" with Chris Stapleton. That same year, Timberlake's producer Timbaland told TMZ that the song was an example of a "new generation of country" and that they "always wanted to do country."

But with this album he seems to be letting go of the need to be categorized by genre. There are some country elements here, but it hasn't forsaken pop completely. What really stands out is how hard it is to define what you're hearing from a singer who's become easy to define. Just like Timberlake, who is a musician and an actor, Man Of The Woods isn't just one thing, and he's finally ready to let fans hear what he's made of.

While his Super Bowl performance will, of course, feature his hits and maybe even an *NSYNC reunion, it's more than likely that he'll perform the lead single off Man Of The Woods. Maybe it's even the song that Pharrell tells him is a "smash" in this teaser, which has Timberlake singing that he ain't going to be stopped.

One thing is for sure: no one's going to stop Timberlake's comeback, which may be the most revealing project from an artist who's been making music on his own for the last 15 years. Turns out, all he needed was a little time in the woods to find his sound.

More like this
J. Lo Just Announced A New Album — And Ben Affleck Inspired At Least 1 Song
By Stephanie Topacio Long
Marcus Mumford, Open Book
By Ilana Kaplan
This James Bond Event At Abbey Road Studios Was A 007 Fan's Dream
By Samantha Rollins
Christine McVie Dies At 79 & Fleetwood Mac Reacts With Touching Tributes
By Radhika Menon
Get Even More From Bustle — Sign Up For The Newsletter