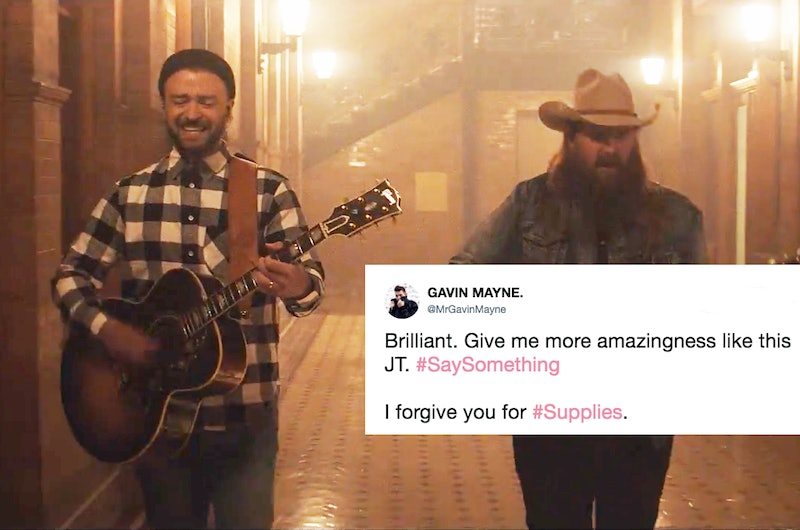 The self-proclaimed man of the woods has dropped another music video, and there is nary a dancing robot to be found. On Thursday, Justin Timberlake released the video for "Say Something" featuring Chris Stapleton, and it is a stunner of a country-pop jam. Not to be confused with "Say Something" by A Great Big World featuring Christina Aguilera, this ditty is track number nine on the former *NSYNC member's upcoming album, Man of the Woods. And lots of fans sure are feeling this new JT tune's sound — finally.

While the response to Man of the Woods' previous singles "Filthy" and "Supplies" has been pretty mixed (to say the least), it seems like "Say Something" and its music video are getting a lot of love on Twitter. The clip, which was directed by Arturo Perez Jr., follows Timberlake and Stapleton as they make their way down a hall, walk down some stairs, ride an elevator, walk up some more stairs, and then end up in a cavernous room that sort of looks like something that'd be in the movie Synecdoche, New York. Timberlake and Stapleton perform the track together for an audience, and the video ends with a stirring singalong. Like the Timbaland and Danja-produced song, the clip is flat-out awesome.

And it sure looks like there are a lot of people on Twitter who would agree that the song and the video are quite lovely. Of course, there are some who aren't on board with "Say Something" — this is the internet, after all — but for the most part, the response appears to be pretty positive. Here are some of the many enthusiastic reactions to JT's latest offering.

People Want More Songs Like "Say Something" From Timberlake

'Tis the power of "Say Something."

It's Been Called His Best

It's an intriguing preview of the rest of the record.

It's Inspired At Least One Wedding Request

Hey, it can't hurt to put it out there in the Twitterverse.

The Game Has Been Changed

No kidding. The melodies going on in this song are the opposite of a joke.

The Emojis Are Worth A Thousand Words

People Are Really, Really Into This Jam

They're digging the duet, the production, the music video — all of it.

It's What Fans Have Been Crossing Their Fingers For

The patience sure paid off.

And that something is a good something.

You May Want To Bundle Up Before Watching The Video

Because gorgeousness-induced chills are inevitable.

This Collaboration Has Been Years In The Making

It looks like JT and Stapleton's performance at the 2015 Country Music Awards was only the beginning of a beautiful duet-ship.

Some Folks Want An Entire Album Of Timberlake & Stapleton Duets

What a gift that would be.

A Round Of GIF-plause For "Say Something"

The first two songs off of Man of the Woods might've not worked for everyone, but "Say Something" seems to be treating many listeners right.

This Seems To Sum Up A Lot Of Fans' Feelings

A+ use of this Siggy Flicker GIF.

This Is The Sound Fans Expected From Man Of The Woods

And whew, is it a gorgeous sound.

After hearing tracks "Filthy," "Supplies," and "Say Something," there's one thing Timberlake's fans can know for sure: When Man of the Woods comes out on Friday, Feb. 2, it's sure to be one heck of a dynamic record.

More like this
How Ghosts Inspired Kesha's New Music
By Jake Viswanath
Beyoncé’s Special Tribute To Sister Solange Was Both Touching & Hilarious
By Stephanie Topacio Long
Is Dua Lipa Dating Trevor Noah? New Photos Show Them Kissing & Hugging
By Brian Anthony Hernandez and Martha Sorren
Wallows Want Their Own Epic “Lizzo Flute Moment”
By Jake Viswanath
Get Even More From Bustle — Sign Up For The Newsletter