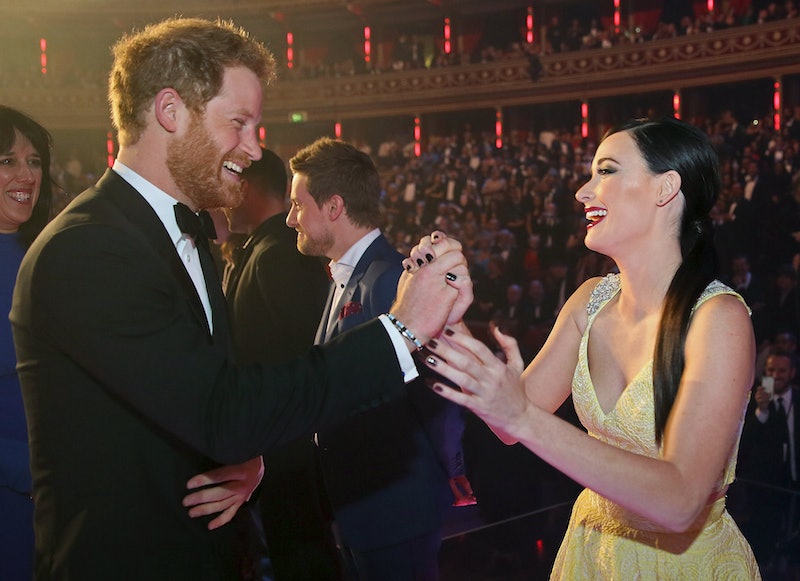 High fives are definitely a royal no-no. That's something Kacey Musgraves learned the hard way. Back in 2015, Musgraves got in trouble for high-fiving Prince Harry. But, looking back on it, she has zero regrets about her not-so-royal introduction.

While talking to Access Hollywood about her upcoming Amazon holiday special The Kacey Musgraves Christmas Show, the singer explained what happened after she gave Prince Harry that greeting. No surprise, there was some who were very worried about the casual gesture.

In 2015, when Musgraves met Prince Harry at the Royal Variety Performance at Royal Albert Hall, "I gave him a little high five," she told Access Hollywood. "Apparently afterwards, the guy who worked at the label was like, 'No, no, no. I can't believe you.'" For him, giving a high five to a royal was "unbelievable."

As Musgraves learned, there are certain rules one must follow when meeting members of the royal family. Specifically, she was told "going up top is not the way" to greet the prince. And that is certainly correct. When meeting a royal it is customary for women to curtsy and for men to bow, according to Harper's Bazaar. And when it comes to handshakes, royals are expected to maintain strong eye contact and stick to two shakes maximum, so as to not show any preferential treatment towards any one person. So, yeah, a high five with a commoner might have been a bit too chummy. (As was the hug Meghan Markle shared with Beyoncé earlier this year, which also reportedly broke royal protocol.)

But, to be fair, as Musgraves pointed out, Harry didn't seem all that insulted by their interaction at all. "He went in for it," she told Access Hollywood. "Whatever." So no, nearly five years later, Musgraves isn't worrying about her decision to high five a royal. And why would she be? Looking back at the photo of the moment now, Prince Harry is all smiles as they go up high.

Last year, Musgraves detailed what that moment was like in an interview with the BBC, admitting she genuinely didn't know the rules of meeting a royal. “Okay, so I’m from Texas. I haven’t read the manual on royal etiquette. I didn’t really go to elocution lessons or anything,” Musgraves said. “He came up and he just seemed super friendly, and I put my hand up and he went for it. We had a laugh. And later, when I came back, the label was like, ‘Oh, you shouldn’t have done that.’"