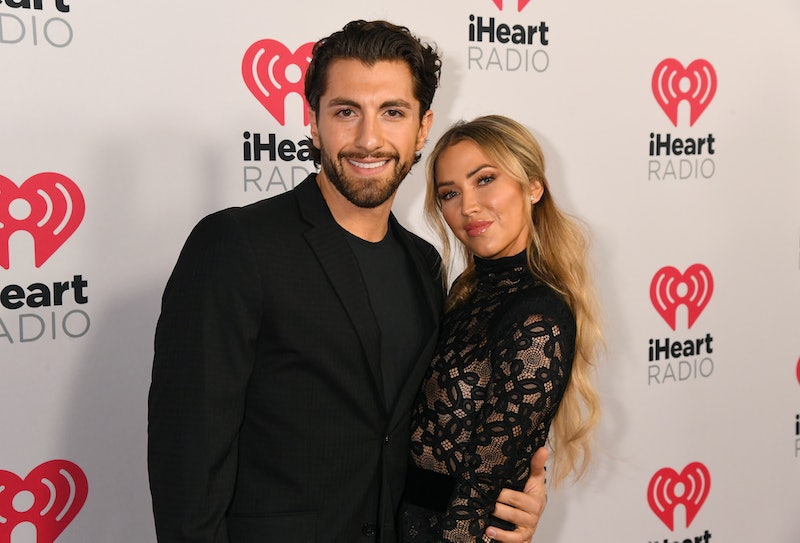 Kaitlyn Bristowe may have split from her Bachelorette winner, but she's still found a happy ending with someone from Bachelor Nation. During an appearance on the June 28 episode of the Whine Down podcast, Kaitlyn Bristowe revealed her relationship with Jason Tartick makes her feel "safe" — and that this is the first relationship where she's felt that way. And if things keep going well, they could just be one of the next Bachelor couples to walk down the aisle.

While chatting about the things they fight the most about with hosts Jana Kramer and Michael Caussin, Kaitlyn explained that she's willing to work through their issues because she feels their relationship is "different" from anything she's experienced in the past. "Previous relationships to this one, it's so wild how different I am because I feel safe," Kaitlyn explained. "I've never felt safe in a relationship until this relationship so, I deal with conflict different and insecurities differently because I don't question him leaving me or, like, get all insecure. I feel safe and loved so I feel all of my insecurities differently now."

Kaitlyn and Jason — who appeared on Becca Kufrin's season of The Bachelorette — first became friends in October of 2018, just before she broke things off with fiancé Shawn Booth. In January 2019, the couple revealed that their "friendship had turned into a relationship" during a joint appearance on the Today show. On The Whine Down, Kaitlyn revealed that it was early on in their friendship that she realized that he was everything she wanted in a partner.

"In your 30s, you kind of really start to know who you are and what you want and what you need," Kaitlyn said of her mindset post-split. "I wrote it down, everything I want in a guy, and I said, 'If I find someone who is sixty percent of this list, I would be lucky.' The only thing that Jason didn't cross off on my list was that I didn't want to date someone from the Bachelor world."

This is not the first time that Kaitlyn has revealed that her relationship with Jason is completely different to any of her past experiences. "I didn't realize a relationship could be this easy and that I could be this happy with somebody. It's just so easy," the "If I'm Being Honest" singer told Entertainment Tonight in June. "We just have a really healthy relationship, healthy communication, and we build each other up."

Jason concurred, and credited their respective experiences on The Bachelorette with helping them build a solid relationship. "The crazy thing about this whole Bachelor world is that it guts you up and opens you up, and you talk about everything and anything, and become comfortable in yourself and your emotions," he explained. "I think that's why you see so many people in the franchise have relationships, whether it's via podcast or on the show ... We were just so open," Jason continued. "We know what we want, we know what we don't want, and yeah, we're here."

One thing in particular that Kaitlyn has been open about is that she doesn't want to get engaged to Jason during the ongoing coronavirus pandemic. "I told him I don’t want to [have a] quarantine engagement," she told Us Weekly. "[I want] a little more romance than just at the house." Sounds like an engagement is definitely on the horizon, but for now, she's happy just being safe at home with Jason and their two dogs.