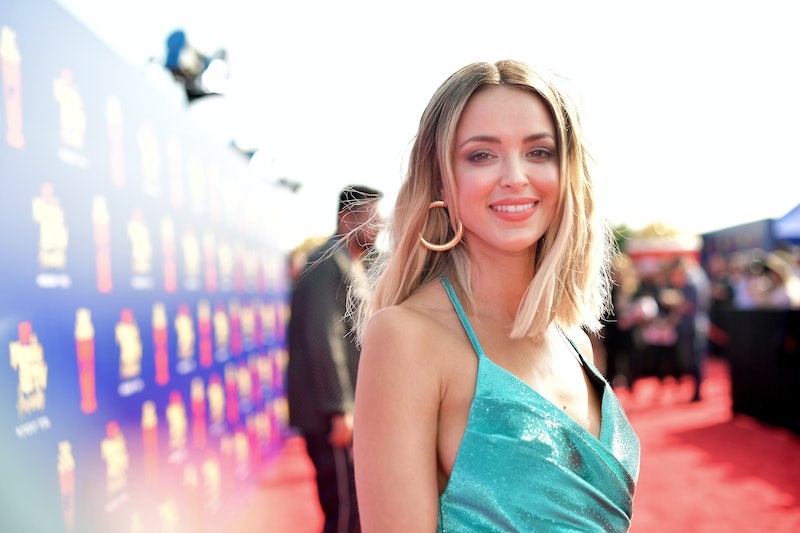 It's only been a matter of weeks since Kaitlynn Carter and Miley Cyrus have been publicly hanging out, but they don't seem to be concerned by what people might be saying about them one bit. In fact, Carter's latest flirty comment on Cyrus' Instagram pretty much proves that point. Regardless of what may be going on between them — which they have yet to confirm or deny — these two are doing their own thing and seem to be having a blast while they do it.

It all started when Cyrus shared a series of photos of herself decked out in an all black Tom Ford outfit on Monday, captioning the photos simply, "TOM FORD." And as Comments By Celebs pointed out on Instagram, Carter commented on one of the photos, and even though she kept her remarks short and sweet, it definitely seems like she's flirting.

"Dear god," Carter wrote, along with a drooling emoji. It doesn't seem like Cyrus has responded to the comment, but it's certainly enough to get people talking — just like most of their outings have done recently. But being that Carter was willing to leave a comment like this so publicly about Cyrus just goes to show that they aren't worried about all the attention they and their relationship, whatever it may be, have been getting lately.

This comment comes just days after the pair celebrated Carter's birthday together on Sept. 4, when Carter shared black-and-white photos of her and Cyrus on her Instagram Story. Since Cyrus was first spotted with Carter this summer after her divorce from Liam Hemsworth became public, the buzz about them has been real, and it probably won't slow down anytime soon.

The good news is that Carter's comment proves that all of that buzz isn't going to stop either of them from living their lives — whether that means the PDA they've been showing off or all the time they've been spending together lately.

And the talk isn't just limited to what might be going on in this potential couple, either — there have even been reports that Cyrus cheated on Hemsworth with Carter, a story she refuted just as soon as it came out.

"But the truth is, once Liam & I reconciled,I meant it, & I was committed. There are NO secrets to uncover here. I’ve learned from every experience in my life. I’m not perfect, I don’t want to be, it’s boring. I’ve grown up in front of you, but the bottom line is, I HAVE GROWN UP," she tweeted in August in an attempt to dispel the rumors. ""I can admit to a lot of things but I refuse to admit that my marriage ended because of cheating. Liam and I have been together for a decade. I’ve said it before & it remains true, I love Liam and always will."

What matters most is that Carter and Cyrus are happy, and at this point, it definitely seem like they are — especially when they're together. It's great to see that they aren't letting the media circus around their relationship get to them too much as they continue to share their adventures and how much they care about each other on Instagram.