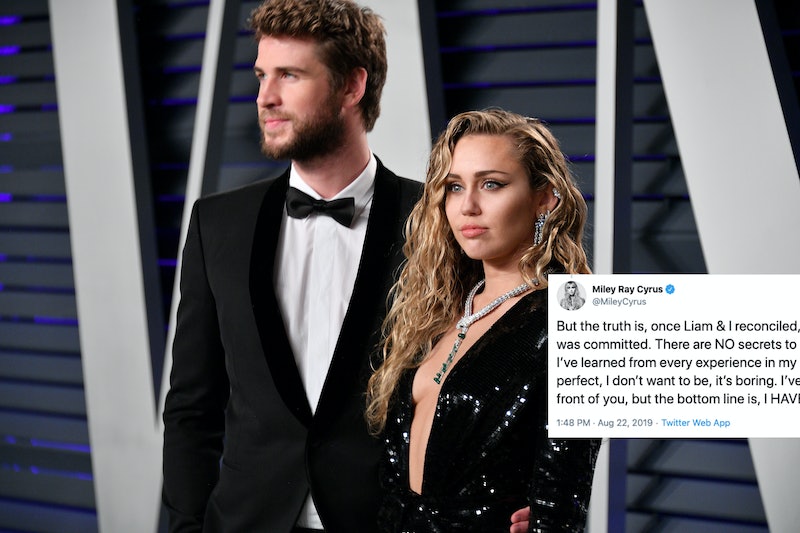 Ever since news broke that Miley Cyrus and Liam Hemsworth split, there have been rampant rumors, including claims of cheating and speculation about why they ended things. Now, Cyrus is clearing the air about her breakup with a series of tweets that drop some major truth bombs. In one of the posts, the singer clarifies she never cheated on Hemsworth, despite what tabloids may say. And another key takeaway here? The split is what's best for them, and she's the "happiest and healthiest" she's ever been.

Cyrus began the lengthy Twitter thread on Thursday, Aug. 22 by acknowledging that while she knows she lives a public life, that doesn't mean people can completely make things up. She wrote:

"I can accept that the life I’ve chosen means I must live completely open and transparent with my fans who I love, and the public, 100% of the time. What I cannot accept is being told I’m lying to cover up a crime I haven’t committed. I have nothing to hide."

The "crime" Cyrus appears to be referencing is the widespread rumor that she cheated on Hemsworth with Kaitlynn Carter, who she's spent lots of time with recently. (Although, of course, that's not an illegal offense.) But whether their bond has transitioned from a friendship to a more romantic relationship recently, that's entirely Cyrus' own business — and that doesn't mean anything happened prior to she and Hemsworth deciding to separate. Others unfairly blamed Cyrus' sexuality for her split, which is another unfair misconception about the whole situation. Basically, it's been a giant blame game on the internet, mostly at Cyrus' expense.

The "Wrecking Ball" singer continued the series of tweets by admitting some missteps of her youth (as she wrote herself, "I f*cked up and cheated in relationships when I was young" and "I lost a massive Walmart deal at 17 for ripping a bong"), while also making known that she's grown up a lot since then. And just because some of her behavior sparked backlash in the past, that doesn't mean she should be forever condemned.

From there, Cyrus segued into just how seriously she took her relationship with Hemsworth after they got back together and married last December:

"But the truth is, once Liam & I reconciled,I meant it, & I was committed. There are NO secrets to uncover here. I’ve learned from every experience in my life. I’m not perfect, I don’t want to be, it’s boring. I’ve grown up in front of you, but the bottom line is, I HAVE GROWN UP."

She also shed more light on the speculation surrounding the reason behind their split, clarifying, "I can admit to a lot of things but I refuse to admit that my marriage ended because of cheating. Liam and I have been together for a decade. I’ve said it before & it remains true, I love Liam and always will."

Ultimately, Cyrus wrapped things up by explaining that the breakup was the best decision for her own well-being — and really, that should be the main focus here. "BUT at this point I had to make a healthy decision for myself to leave a previous life behind. I am the healthiest and happiest I have been in a long time," she wrote. "You can say I am a twerking, pot smoking , foul mouthed hillbilly but I am not a liar."

She even emphasized how far she's come, concluding, "I am simply in a different place from where i was when I was a younger."

Of course, when two celebrities split, there's going to be a lot of conversations about it — it's the nature of the business, as Cyrus herself acknowledged. But jumping to extreme conclusions doesn't help anyone either, and obviously things got pretty bad if the singer had to hop online to clear the air.

Even Hemsworth posted to Instagram last week to address some falsehoods circulating. After what appeared to be a fake interview went viral, the Hunger Games actor wrote:

"Hi all. Just a quick note to say that Miley and I have recently separated and I wish her nothing but health and happiness going forward. This is a private matter and I have not made, nor will I be making, any comments to any journalists or media outlets. Any reported quotes attributed to me are false. Peace and Love."

Now that Cyrus and Hemsworth have both spoken out, hopefully things will calm down a bit. Going through a breakup is bad enough, going through a breakup on a majorly public scale seems even worse, and having to field cheating rumors on top of that? Yikes, that sounds awful. No wonder Cyrus took matters into her own hands on Twitter.