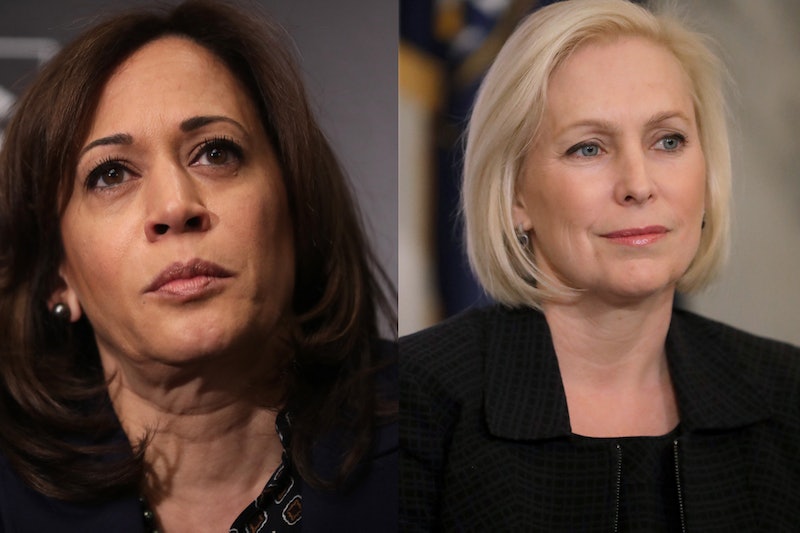 On Thursday, Democratic presidential candidates and Sens. Kamala Harris and Kirsten Gillibrand called for an investigation into the sexual assault allegation against Virginia Lt. Gov. Justin Fairfax. The day before, Dr. Vanessa Tyson came forward accusing Fairfax of forcing her to perform oral sex on him at the Democratic National Convention in 2004. Fairfax has repeatedly denied the allegation, saying in one statement that the encounter between him and Tyson was "consensual" and in another that he has "never done anything like what she suggests."

"In this country, institutional bias stacks against survivors, for the powerful," Gillibrand wrote. "We have to support survivors first so their claims can be fully investigated."

Fighting sexual misconduct has been a priority for both Gillibrand and Harris during their time in the Senate. Gillibrand championed bills to crack down on sexual assault in the military, while Harris in 2018 co-sponsored a bill aimed at combating workplace sexual harassment. When Dr. Christine Blasey Ford accused then-Supreme Court nominee Brett Kavanaugh of sexually assaulting her, Harris said that she believed Ford, and Gillibrand gave a Senate floor speech denouncing Kavanaugh's supporters for standing by him. Kavanaugh denies having sexually assaulted anyone.

Fairfax is just one of three top Virginia officials embroiled in scandal after Gov. Ralph Northam and Attorney General Mark Herring each admitted individually that they had worn blackface makeup in the 1980s. The trio of controversies has raised speculation that one or more of the officials may resign or be impeached, which in turn has sparked a flurry of interest in the Virginia government's line of succession laws.

In her statement, Tyson said that she and Fairfax met while working at the 2004 Democratic National Convention. She says that after the two went to Fairfax's hotel room, "what began as consensual kissing quickly turned into a sexual assault" as Fairfax unbuckled his pants and "forced me to perform oral sex on him."

"I cannot believe, given my obvious distress, that Mr. Fairfax thought this forced sexual act was consensual," Tyson wrote. "To be very clear, I did not want to engage in oral sex with Mr. Fairfax and I never gave any form of consent. Quite the opposite. I consciously avoided Mr. Fairfax for the remainder of the Convention and I never spoke to him again."

Before Tyson went public, but after elements of her story had been reported in the media, Fairfax said that the allegation is "not true and it didn't happen." He elaborated on Wednesday, claiming in a statement that his experience with Tyson was "a consensual encounter" and that "at no time did she express to me any discomfort or concern about our interactions, neither during that encounter, nor during the months following it, when she stayed in touch with me."

The accusation against Fairfax was reported shortly after Northam admitted to wearing blackface in college. Days later, Herring acknowledged that he, too, had put on blackface makeup in college. As a result of the three scandals, the future leadership of Virginia's executive branch has been thrown into uncertainty.

As of Thursday evening, Fairfax had yet to publicly comment on Gillibrand and Harris' calls for an investigation.