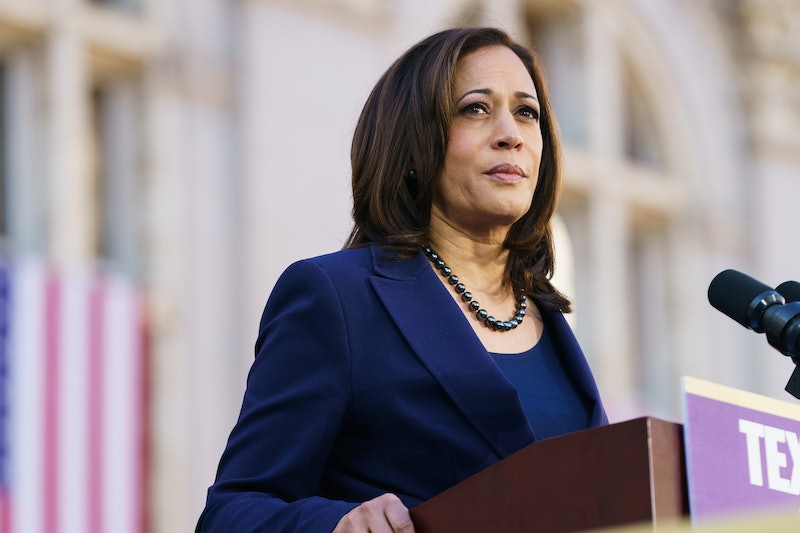 The primary question on most Democrats' minds entering the 2020 presidential election is how to get President Donald Trump out of office. While everyone likely has a different idea of exactly how to accomplish that, some have asserted that the party learned in 2016 that women candidates are less likely to beat Trump. On Monday, recently declared Democratic presidential candidate Kamala Harris addressed how a woman could beat Trump in 2020, and her words are inspirational for anyone hoping that 2020 might be the year when that glass ceiling finally breaks.

"Some have also said that, given what occurred in 2016 and the current political climate, that a male nominee will have a better chance this time around than a female nominee," said playwright and composer Robert John Ford, posing his question to Harris at a CNN town hall event. "Would you please respond to this so that this man has a response ready the next time a man tries to mansplain why a man would make a better nominee?"

This town hall marked Harris' first visit to Iowa, as Politico noted, and it came only a day after the formal launch of her presidential campaign.

Ford's question brought a laughing Harris to her feet, and she joined the audience in applauding before giving her answer.

Based on early polling of the 2020 Democratic primary, Harris' words hold water in at least one sense. Given the limited information that voters have at this stage, Democratic supporters have not begun to gather around a frontrunner, according to a newly released poll from ABC News and The Washington Post.

“I’ve heard people say when I ran, and ran as the first woman who would win, ‘People aren’t ready. It’s not your time. Nobody like you has done that before,’” Harris said. “I haven’t listened, and I would suggest that nobody should listen to that kind of conversation.”

At her official campaign launch, Harris focused on painting herself as a candidate who could unify America. While her speech didn't explicitly mention Trump, it did contain numerous clear references to the current president.

“We are here because the American dream and our American democracy are under attack and on the line like never before. And we are here at this moment in time because we must answer a fundamental question.’’ Harris said, according to USA Today. “‘Who are we? Who are we as Americans?’ So, let’s answer that question to the world and each other, right here and right now: ‘America, we are better than this.’’’