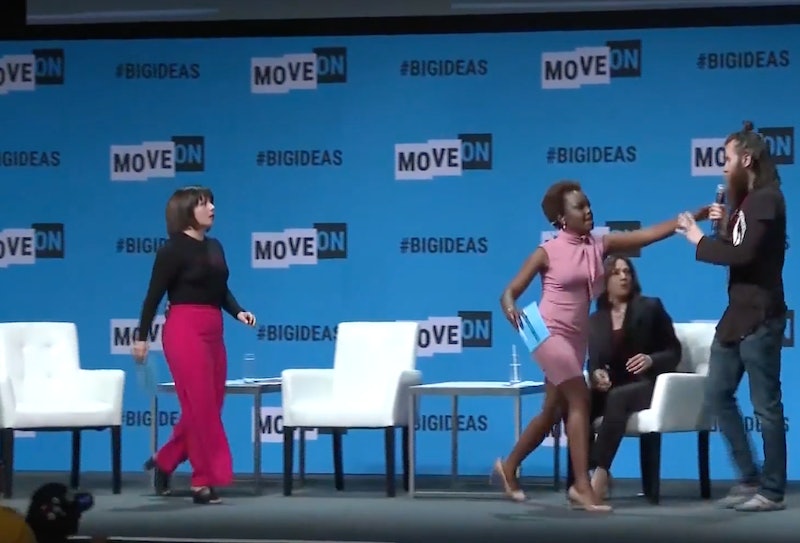 The MoveOn "Big Ideas Forum" was supposed to be a forum for presidential candidates to share their views — but somebody else tried to take the spotlight on Saturday in San Francisco. Sen. Kamala Harris was interrupted by a male protestor while talking about the gender pay gap and her plan for pay equity on Saturday, according to Politico. Video from the event shows a man walk up onstage, grab the microphone and then announce, "We were protesting just a few minutes ago asking for your attention to a much bigger idea." At that point his microphone was turned off.

According to a press release from Direct Action Everywhere, the protestor was trying to talk about animal rights with regards to factory farms and big agriculture. The man, Aidan Cook, told Politico that he had "done everything" in attempt to "try to start this conversation through normal channels." "We've reached out to all the campaigns, including Kamala's, we've reached out to MoveOn and pretty much have been completely ignored," he said.

Cook was asked by a reporter if he thought about how it would look taking the mic from a woman of color running for president, and he told a reporter for The Guardian yes. "I did," he told Lois Beckett, according to her account on Twitter. "I tried to show my profound respect for each of the people onstage," Cook continued according to Beckett.

As Cook was removed from the stage, the moderator said, "Thank you so much sir, for your big idea, but we want to make sure that we are able to get through this. It's OK, folks, it's OK. People have their own big ideas."

Harris, though, was speaking about women receiving equal pay — not agricultural policy. And she didn't let the interruption stop her. "It's all good. It's all good. Don't worry," Harris said as she got back on stage. She went on to explain her plan, which includes fining companies that do not make efforts to close the pay gap among their staff. The fines would be 1% of profits per 1% of pay gap.

Harris' National Press Secretary addressed the interruption using the word "mansplain" to describe the protestor's behavior. "Kamala Harris doesn’t flinch," Ian Sims wrote on his account. "She is tough and strong. She certainly isn’t 'timid.' Dudes can mansplain all they want, and their avatar in the White House - the Mansplainer in Chief - is in trouble with her opposite him on the debate stage."

Later he furthered that argument. "Security aside, one thing that jumps out to me about this whole situation is how entitled a dude must be to rush a stage and literally take a mic out of the hand of a sitting senator, 3x CA statewide elected official, and presidential candidate," Sims wrote in another tweet.

MoveOn apologized on Twitter for the incident. "We sincerely regret that a protestor was able to gain access to the stage at our forum today & we apologize to Sen. @KamalaHarris," MoveOn's account posted. "The protestor was removed & the program resumed. MoveOn members were excited to hear Harris continue to discuss her Big Idea to achieve pay equity."

One of the people who tried to keep the protestor from Harris was her husband. He posted on Twitter that the couple are doing fine. "We are good," he wrote.