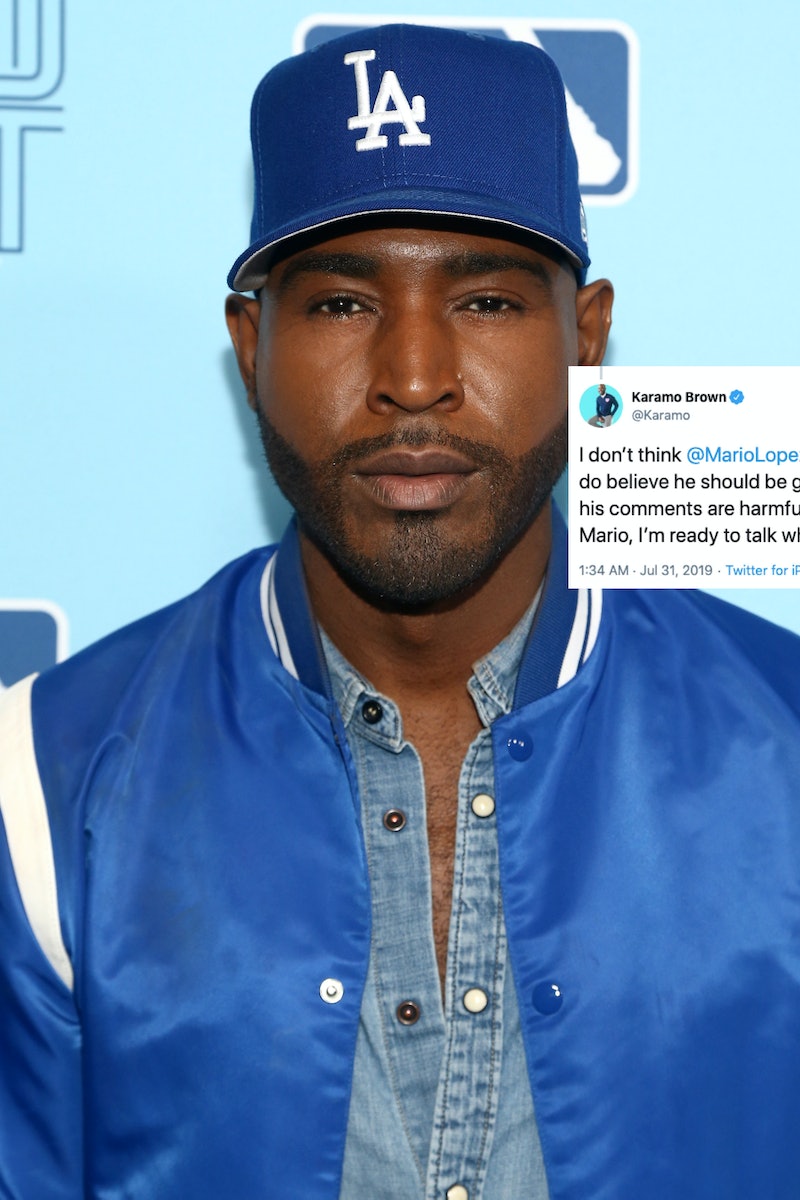 Mario Lopez's recent comments regarding raising transgender children have raised more than a few eyebrows, including those of a Queer Eye fan-favorite. On Twitter on Wednesday, July 31, Karamo Brown responded to backlash over Lopez's comments about children's gender identity with a measured statement about why people shouldn't "cancel" the host just yet. (It should also be noted that the Extra host has since apologized for his remarks.)

Brown — who, in addition to his entertainment career, is also a social worker and a licensed psychotherapist — tweeted that he was "disappointed" to hear Lopez's comments, which he made on The Candace Owens Show in June. In case you missed it, the TV host's discussion with the conservative figure turned to Hollywood celebrities' "weird trend" of allowing young children to express their gender identity, per Yahoo Lifestyle.

In particular, they mentioned Charlize Theron, who revealed in an interview with the Daily Mail in April that her child, Jackson, identifies as female (she told the publication that Jackson told her that she was a girl when she was 3 years old). Lopez told Owens that he was "blown away" by this, and that he felt as though it was "dangerous" for parents to make the "determination" about their child's identity, as Yahoo Lifestyle also noted.

On Twitter, the Queen Eye culture expert responded to the Yahoo Lifestyle post about Lopez's recent remarks, and wrote, "I’m disappointed to read @MarioLopezExtra comments about parent’s who support their child’s [openess] about their gender identity." He continued to say that an open conversation about gender identity is far from a dangerous thing, "As a social worker I am trained to identify abuse or neglect of a child. Healthy & safe dialogue w/ kids is neither abusive, neglectful or 'dangerous.'"

Before anyone goes to "cancel" Lopez over his comments, Brown noted that he believes that the host should be given the chance to learn why his remarks could be seen as "harmful" and, subsequently, learn more about the LGBTQ community. He wrote,

"I don’t think @MarioLopezExtra should be ‘canceled’. But I do believe he should be given the opportunity to learn why his comments are harmful to trans youth and their parents. Mario, I’m ready to talk when you are."

As for Lopez, it appears as though he would be ready to take Brown's advice, as he has since apologized for remarks while acknowledging that they were "hurtful." The Extra host's rep released a statement to Bustle containing his full statement in regards to the matter, which read:

“The comments I made were ignorant and insensitive, and I now have a deeper understanding of how hurtful they were. I have been and always will be an ardent supporter of the LGBTQ community, and I am going to use this opportunity to better educate myself. Moving forward I will be more informed and thoughtful.”

While, like Brown and many others on Twitter pointed out, Lopez's comments could definitely be seen as harmful, it sounds like it's been a learning experience for the Saved By The Bell alum. There's a good chance that he's open to learning about the many important nuances within this conversation regarding the LGBTQ community, as his statement acknowledged.