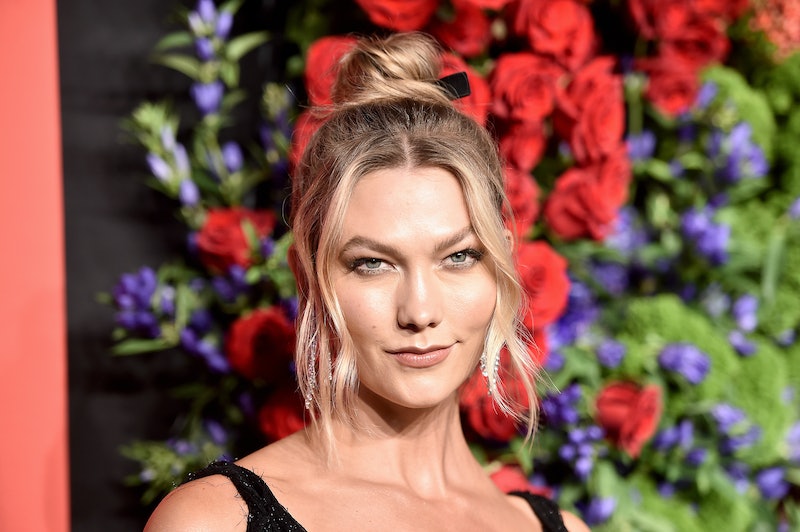 For hair-obsessed beauty lovers, it may seem like a celebrity woman has cut her hair super short every single day this month. The latest to join the trend is Karlie Kloss' and her new bob. The model joins the ranks of short-haired A-listers like Jennifer Lopez, Selena Gomez, and January Jones. While traveling through Paris for Fashion Week, Kloss was hit with the itch to cut her hair — so she immediately booked an appointment to do something about it.

The trim was done on Sept. 26 by hairstylist Jacob Rozenberg, who cut Kloss' hair just below her jaw. Before the appointment, Kloss' hair rested just above her shoulders, which was her signature style for all of 2019. Kloss shared news of the trim on Instagram Stories as it was happening, capturing her sitting in a salon chair with her ends falling to the floor.

While short hair is trending this fall, one thing that might deter people from getting the cut is the styling. You can't just sweep up a bob into a messy ponytail on a lazy hair day, and the look requires some effort. But as it turns out, styling Kloss' bob was pretty simple. Rozenberg says he only used three products to create Kloss' sleek look.

"I used Bumble & Bumble Hairdressers’ Invisible Oil & Primer for the mid-shaft to ends, and Serge Normant Dream Big Mousse on the roots," Rozenberg tells Bustle. He also used Oribe Dry Texture Spray to give the bob a tousled touch.

As for how to style the hair, it takes just a couple of steps. See the breakdown below.

The trick is to focus on the "mohawk" section of your hair first, which is between both your temples and crown. "I blow dried the 'mohawk' section to create volume, using my Harry Josh Pro Tools 2-inch round brush," Rozenberg says. He then set that section in large Velcro rollers.

Next up is blow drying and straightening the bob to create its shape. "For the rest of the hair, I blow-dried with the Harry Josh Premium Oval Brush, and then used my Harry Josh Pro Straightening Iron on the bottom two inches of the hair to show off the sharpness of the cut, keeping it modern," Rozenberg shares.

Now it's time to give the hair that lived-in feel. "I then took out the rollers, combed through with my fingers, and finished with Oribe Dry Texture Spray to create a tousled, lived-in look," Rozenberg says.

Another trick that Rozenberg likes to use is to tuck the hair from the "mohawk" section behind the ears and pin it with setting clips. "Let it set like that for a minimum of five minutes while you’re doing your makeup — that way you get natural movement," he says.

Kloss' new blunt cut looks very similar to her signature look in 2013, which was dubbed "The Karlie." Kloss was 20 years old at the time, and she cut off seven inches of her dark hair for a photo shoot. The end result was a chin-grazing brunette bob with wispy bangs.

According to The New York Times, the short cut was orchestrated by Vogue for a four-page feature story on the bob. The wispy bob turned out so well that it was declared the "cut of the moment" by several outlets.

Kloss told Fashionologie backstage at a fashion show in 2013 that short hair “takes the focus off your hair and puts the focus on you.” Maybe Kloss wanted to recapture that feeling again.

Whatever her reasoning for the new cut, Kloss looks amazing in the short bob. It almost makes you want to book an appointment of your own.