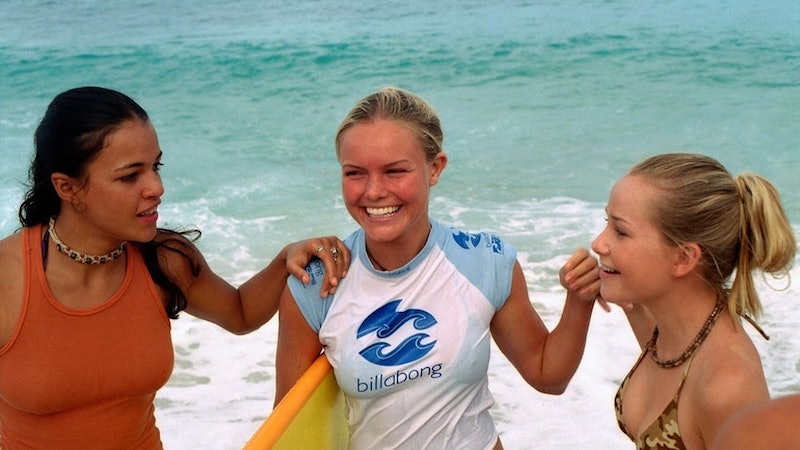 This summer would be a little less cruel if there was another Blue Crush on the horizon and it turns out the original film's star agrees. Kate Bosworth would love a Blue Crush reboot that would give her the chance to take to the waves again. In fact, Bosworth says she has some thoughts on the direction of the movie if it ever happens.

In an interview with People, Bosworth talked about the 2002 film, where she played Anne Marie Chadwick, a surfer who after suffering a terrible wipeout, is looking for another big break by catching a big wave at Pipeline, a surfing competition on Hawaii’s North Shore area. The movie is actually based on Outside's story "Life's Swell" by Susan Orlean, about Maui's surf girls and Bosworth, for one, would like to check back in with the one she played.

“I’m 100 percent in for a Blue Crush reboot,” Bosworth told People. “I have thoughts on how to do it.” Unfortunately, she didn't share those thoughts with the magazine. Let's assume she doesn't want to ruin the surprise for fans who want to be surprised when they see Bosworth hopefully reunite with her Blue Crush costars Michelle Rodriguez and real life surfer Sánoe Lake. Or, maybe, she'd rather wait to share those details with the screenwriter of the very authentic surfing film, which fingers crossed will actually happen.

However, Bosworth did plead her case for why the world needs another Blue Crush movie. “What better time for a bad ass female reboot. Why not now? That would be a dream,” Bosworth told People, adding, "I just love strong female characters, and I feel like right now it’s so important to see those strong female characters on screen. If I’m a part of something that inspires and it has longevity – that’s it for me.” While fans might be sold on this pitch, no word yet if the studio was listening.

Of course, this wouldn't be the first Blue Crush sequel. Back in 2011, a direct-to-video Blue Crush 2 was released, which Bosworth and the rest of the original cast had nothing to do with. This movie focused on a new surfer girl who travels to Africa in hopes of surfing the shores her mom once ruled. And while some might have been happy to getting a surfing movie, it just wasn't a real sequel to the film that made so many girls want to pick up a surfboard.

It's also not the first time there's been reports of a possible Blue Crush reboot. Three years ago, a Blue Crush TV show was reportedly in the works at NBC with the film's co-writer Lizzy Weiss onboard to write the pilot. As of now, there's no word on if that is still happening, but Bosworth is making it clear she wants in on the next Blue Crush iteration.

And why wouldn't she? Bosworth was a recent high school graduate when she got her role in Blue Crush, which ended up being her big break. There would be something kind of sweet to see Bosworth play Anne Marie once again. Let's hope Anne Marie's done as well for herself as Bosworth has.