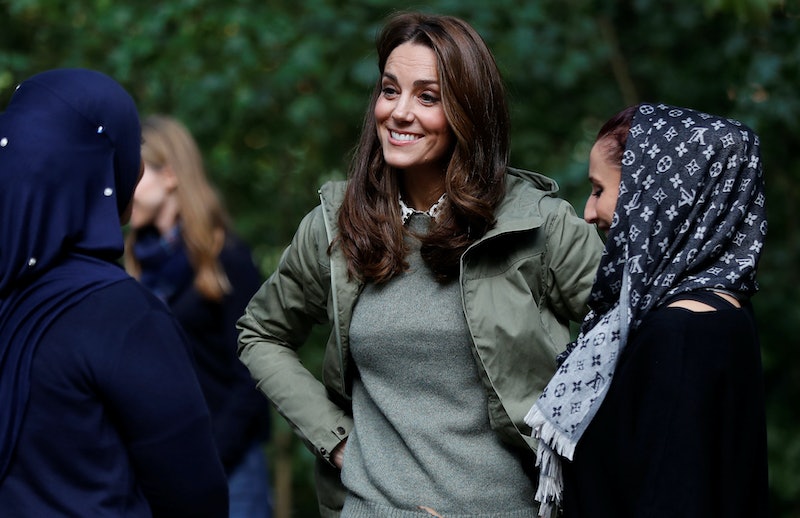 The Duchess Of Cambridge has had quite the public hiatus since giving birth to third child Prince Louis Arthur Charles of Cambridge on April 23 this year. However that all changed this week when Kate Middleton returned from maternity and stepped back into the public arena. The occasion was a visit to Sayers Croft Trust Forest School and Wildlife Garden at Paddington Recreation Ground, and the cameras were predictably there to capture every minute.

This was the first official royal duty the Duchess has taken part in since beginning her maternity leave earlier in the year. Middleton arrived at the royal engagement in a casual brown and khaki outfit, which appeared to be more than appropriate for the occasion due to the nature of her trip. Cosmopolitan reported that the boots were her old Penelope Chilvers favourites, while the trousers are actually Zara. During her visit, which Metro reports involved supporting inner-city children to have the opportunity to explore the natural world, Middleton was given a tour around the facilities, while also interacting with the centre's staff and visiting children.

Those familiar with the complexities of royal protocol noted that the Duchess Of Cambridge may have ignored some important royal protocol. This was spotted during Middleton's arrival, when the 36-year old appeared to shut her own car door — I know, outrageous. This comes after royal newbie, Meghan Markle, was seen breaking the same rule just days ago during her first solo engagement at the Royal Academy of Arts. When discussing the apparent protocol breach, etiquette expert William Hanson argued that in fact no royal rules had been broken, he said "Usually, if you are a member of the royal family or a dignitary, you have a member of staff to open and close a car door for you", reported the BBC.

As previously reported, the Duchess opted for a longer run of maternity leave than she previously took after the births of both Prince George and Princess Charlotte. Her last official royal engagement took place on March 22 at the Copper Box arena in Stratford, which aimed to celebrate the Commonwealth — meaning the Duchess has been out of royal action for six months. This is a contrast to Middleton's previous pregnancies, Ok reports, in which the Duchess returned to work just one month after giving birth to Prince George, and four months after the birth of Princess Charlotte.

During her visit to the Sayers Croft Trust Forest School and Wildlife Garden, the official Kensington Palace Twitter account shared a video of the Duchess exploring her surroundings. The post read "The Duchess of Cambridge is visiting @SCTrust Forest School and Wildlife Garden, which gives inner city children a unique opportunity to learn about and engage with the natural world"

Although this was Middleton's first official day back at work, she has been spotted out and about throughout the course of her maternity leave —most recently in the Royal Box at the 2018 Wimbledon championships, and of course back in May at the wedding of Prince Harry and the now Duchess of Sussex, Meghan Markle.

Although more of a family occasion, The Duchess of Cambridge's next public appearance is expected at the wedding of Princess Eugenie and Jack Brooksbank. The upcoming royal event is due to take place at St George's Chapel in Windsor on Friday 12 October.