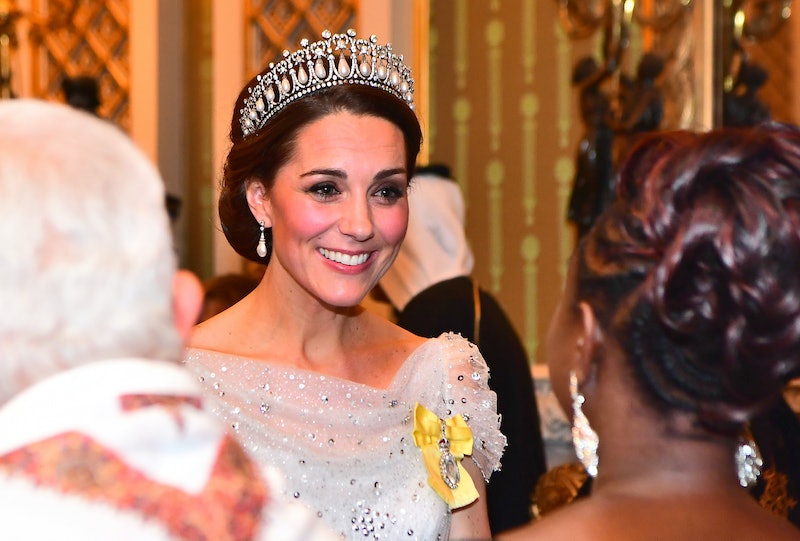 When Princess Diana died, she left behind an enduring legacy as an incredible humanitarian, loving mother, and timeless style icon whose wardrobe continues to impact the fashion forward today. In fact if you look closely at Kate Middleton and Meghan Markle’s wardrobes, it’s easy to pick out little nods to their late mother-in-law from Kate’s Lindo Wing dresses through to Meghan Markle’s pantsuits. Looking an absolute vision, Kate Middleton wore Princess Diana’s tiara to Queen's Diplomatic Reception and no doubt did the late royal proud.

The piece in question is one that Princess Diana wore frequently and is called the Lover’s Knot tiara, though it’s sometimes referred to as the Cambridge Lover’s Knot tiara. According to Town and Country, the tiara dates all the way back to 1914 when the House of Garrard crafted the intricate piece for Queen Mary. When the royal died, she left the tiara to Queen Elizabeth II who the outlet report later loaned it to her then daughter-in-law Princess Diana “as a wedding gift” in 1981.

From then on, the tiara became one of Princess Diana’s calling cards even though the outlet claimed it was “so heavy that it hurt her head.” They also added that the crown was eventually returned to Queen Elizabeth II after Princess Diana divorced Prince Charles. It wasn’t seen again until 2015, when Kate Middleton brought the tiara back into the limelight at that year's diplomatic reception according to Hello!

This time around, Middleton was all smiles in the beautiful pearl tiara and matching pearl drop earrings, which People claims “also belonged to Diana.” She also turned to Jenny Packham, one of her favourite British fashion designers, for her breathtaking dress, the Daily Mail reports. The Duchess of Cambridge really brought the bling last night as her white dress was overlaid with a shimmering sheer fabric, which featured pops of silver.

The yellow ribbon pinned to her left shoulder however wasn’t part of the dress, but is an important bit of royal tradition. Town and Country previously revealed that it’s a symbolic brooch called the Royal Family Order “given from the queen to relatives in the royal family as a reward for their service”.

The yellow ribbon features a cameo of Princess Elizabeth and an enamelled Tudor crown and, in fact, Princess Diana was honoured with one as well when she was a member of the royal family according to Good Housekeeping.

While Kate and Prince William rubbed shoulders with political bigwigs, Prince Harry and Meghan Markle were having a very different kind of night. The Duke and Duchess of Sussex instead attended a Christmas carol fundraising service for the Henry van Straubenzee Memorial Foundation, a charity set up to honour Prince Harry’s close friend who sadly died in a car crash according to People.

At the event, People claimed that Meghan allegedly read an inspirational poem for attendees and Prince Harry also honoured the founder Claire van Straubenzee by calling it the “most incredible legacy for [her] son.”