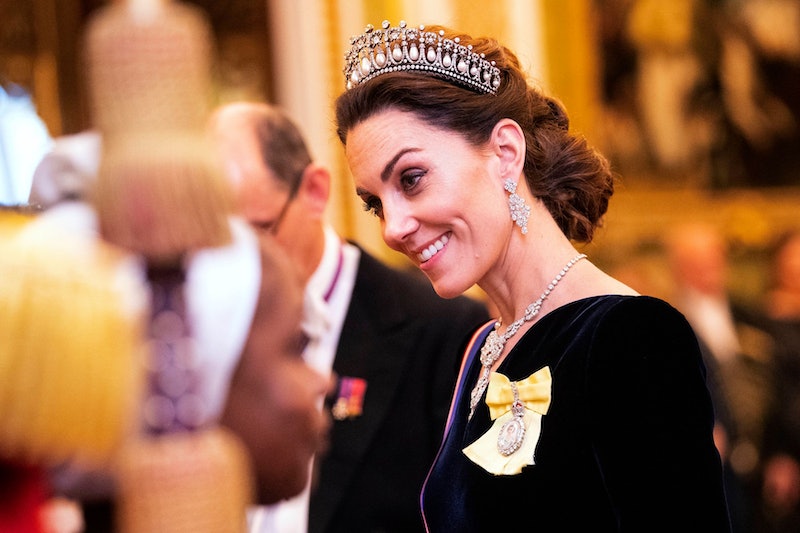 For the royal family, fashion is no walk in the park. While most people work with a capsule wardrobe, every item in the royal wardrobe is meticulously chosen to suit specific regal engagements. It really is serious business. Some of the various items in the royal's clothing collection hold particular significance and have been passed down for generations like the tiara that Kate, Duchess of Cambridge recently wore, which once belonged to Princess Diana.

Princess Diana wore her Lover's Knot tiara frequently and now the heirloom has been passed onto her daughter in law. On Dec. 11, 2019, Kate wore the tiara at Buckingham Palace while attending a reception for the Diplomatic Corps and, in true royal form, she looked dazzling as ever, pairing it with a stunning black dress. The tiara itself is a combination of diamonds and pearls. Basically, think of the princess tiara from you're childhood dreams and that's pretty much it.

According to Town and Country, this specific tiara was first created for Queen Mary back in 1914 by the House of Garrard (the royal jewellers) from pearls and diamonds already owned by her family. Queen Mary modelled the tiara on the original Cambridge Lover's Knot tiara that was owned by her grandmother Princess Augusta of Hesse.

The Court Jeweller reports that, when Queen Mary commissioned the tiara, she "sacrificed a tiara from her own jewellery collection, the Ladies of England Tiara, to make it." Town and Country report that the tiara was then passed down to the Queen who "wore it a couple of times in the '50s" before being loaned to Princess Diana as a wedding gift.

Kate has actually worn the Lover's Knot tiara to the Diplomatics reception a few times before, including last year when she paired it with a sparkling white gown.

And the bejewelled headpiece isn't the only thing that Kate inherited from Princess Diana. Her iconic engagement ring is from Diana's jewellery collection too; it was passed down onto William following his mother's death.