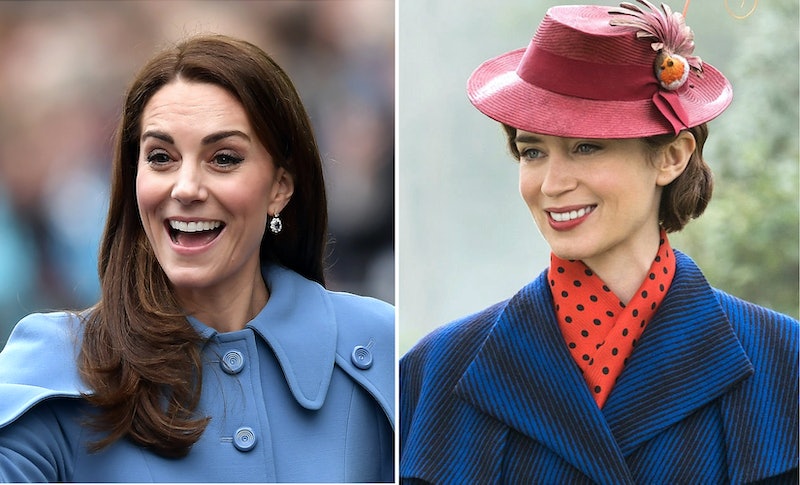 The award season may be coming to a close, but that hasn't stopped the stars of the red carpet from solidifying one of the biggest trends of 2019 — the cape. As Marie Claire reports, during the second day of the Duke and Duchess of Cambridge's royal tour in Northern Ireland, Kate Middleton wore a Mulberry coat adorned with an understated shoulder cape that gave off some serious Mary Poppins vibes.

Obviously it's not exactly the same as the coat Emily Blunt wore as the iconic nanny in the recent sequel, but there's no denying that the similarities are there. Both the red and navy variations of the coat that Blunt wears in the film are strikingly alike in style to Middleton's Mulberry number, even down to the high-waist belt. I mean, just imagine the Duchess wearing a trilby hat and holding an umbrella and bam! You've got yourself a real-life Mary Poppins.

Sadly, however, there wasn't a trilby in sight. Middleton completed her outfit with a "navy Jimmy Choo clutch and suede Robert Sanderson court shoes" as Marie Claire reports, and she was also wearing Princess Diana's sapphire earrings that were passed on to her from Prince William "following their engagement in 2010," according to the Mirror.

The Duke and Duchess' visit to Ballymena was largely focused on connecting with the younger generation there, including visits to charity Cinemagic and the Sure Start programme. As explained by Kensington Palace in a statement, "[t]he Duke and Duchess will take part in some of Cinemagic's workshops to see the full range of training they provide" at the Braid Arts Centre, and will also "see some of the different programmes that Sure Start provides to understand how the organisations supports parents and provides best practice for early years work."

The royal couple also met privately with "officers and staff from the Police Service in Northern Ireland to hear about the unique challenges they face" at Hillsborough Castle, "the Queen's official residence when she's in the area," the Mirror reports.

Described by Hello as a visit focused on "the positive impact that sport, nature and the outdoors can have on childhood development, and improved physical and mental health for all," the royal couple began their two-day visit of Northern Ireland at the Windsor Park football stadium, where they visited Irish Football Association (IFA) who "run outreach programmes that benefit the mental and physical health of local communities," the palace explained in a statement.

They also visited the charity Extern in Fermangah, which provides "a safe space to help and support [...] young people, with particular emphasis on outdoor activities and developing independent living skills." While the Duchess was dressed more casually for these visits, she wore a beautiful pale green Missoni dress for a reception at an event she went to at Belfast's Empire Music Hall, Harper's Bazaar reported.

Here the Duke and Duchess met with representatives of "Northern Ireland's business, arts and sport sectors, including former gold-medal winning Olympic pentathlete Dame Mary Peters who had been appointed Lady Companion of the Most Noble Garter by the Queen earlier in the day," the palace reported.