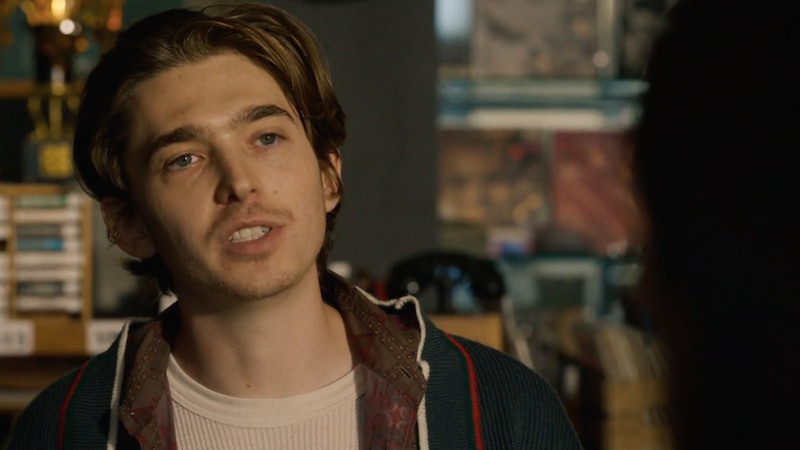 Early on in this season of This Is Us, teenage Kate got a job at a music store and started dating a guy, Marc, who also worked there. It seemed like things were going well for her... for a little while. At the end of Episode 5, adult Kate found a photo of Marc, and it was made very clear that something awful had happened between them. Well, on Tuesday night's episode, "Sorry", This Is Us fans got another look at Kate's boyfriend and another sign of some bad news to come.

If you don't remember, Episode 5, "Storybook Love", featured Rebecca hosting college-aged Kate and Marc, Randall and Beth, and Kevin and Sophie for dinner at her and Kate's new home. But, the episode ended with grownup Kate finding a Polaroid of Marc from that night many years ago and showing Rebecca, who responded, "I was trying so hard to hold it together that year after your father died, and I wanted to believe so badly that you kids were happy. I didn't see what was happening." Kate responded, "I didn't see it, either."

The new episode doesn't focus on Kate — instead the main storylines are about Kevin/Cassidy/Nicky and Rebecca/Randall — but there is a scene at the beginning in which Marc comes over to pick up Kate for a movie date. Randall notes that he and Beth just saw Practical Magic, and when Kate expresses her excitement over the idea of seeing it, Marc says, "But we're not 12-year-old girls, right?" in a tone that feels much more controlling than sarcastic humor.

When they leave, Randall asks Rebecca, who is preoccupied with a broken dishwasher and mortgage payments, "What does Kate see in that guy?" And she responds, "Honestly, I'm just happy that she's happy."

It's unclear at this point what the situation with Marc will end up being, other than the fact that something negative happens, but it's a major red flag that he's so controlling. On top of that, the scene also hinted that dating Marc is having an effect on Kate's already troubled relationship with food. When Kate picks up a banana, Rebecca says, "Bug, that's not lunch," and Kate claims she'll pick up something else to eat at the theater. It's an exchange that wouldn't be included unless it meant something more.

Regardless of what goes down with Marc, the situation will likely be important to viewers' understanding of Kate as a person and also her connection with mother. It's long been clear that Rebecca and Kate's relationship is more strained than, say, Rebecca and Randall's ("R&R time" ring a bell?), and it makes sense if Kate feeling like Rebecca wasn't paying attention to her in a time of need is part of that. Of course, adult Kate can understand that Rebecca had a lot to deal with in the aftermath of Jack's death, but the situation still had to take a toll on her psyche. And this isn't even considering how the relationship with Marc might have affected Kate in ways we can't even know yet — it could play a role in her marriage to Toby or in the way she raises her own son.

Hopefully, some more clarity about Marc is coming soon. If what happened between him and Kate is as traumatizing as it seems, fans shouldn't be left to keep looking out for "clues" about something that could be as dark as emotional or physical abuse. Instead, let's find out what happened and then move on to what it means for Kate as a character. That's much more interesting.

More like this
'Bachelor' Star Cassie Randolph’s Sister Is In The 'Yellowstone' Spinoff '1923'
By Grace Wehniainen
Shonda Rhimes Responded To The Surprise Exit Of A Day 1 'Grey's Anatomy' Figure
By Grace Wehniainen
Everything To Know About A Potential 'Lockwood & Co.' Season 2
By Gretchen Smail
This 'Gossip Girl' Wardrobe Error Has Gone Viral On TikTok
By Alyssa Lapid
Get Even More From Bustle — Sign Up For The Newsletter
From hair trends to relationship advice, our daily newsletter has everything you need to sound like a person who’s on TikTok, even if you aren’t.