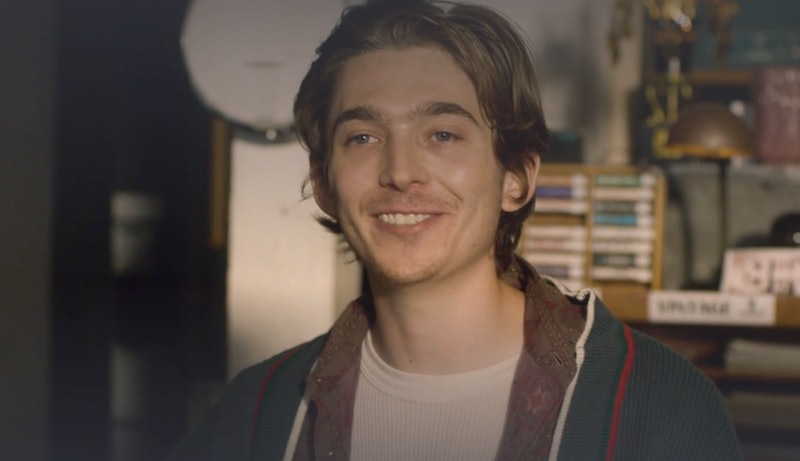 Spoilers ahead for This Is Us Season 4, Episode 5. In the 1990s timeline, teenage Kevin doesn't like Kate's boyfriend Marc on This Is Us, and it doesn't seem like fans should either. Viewers first met Marc, played by Austin Abrams, in Season 4, Episode 4 when Kate went to a music shop to replenish her CD collection that she'd lost in the fire. Marc worked at the store and soon convinced Kate to get a job there as well. Before long, they began dating. But there's seemingly more to him than the sweet surface he portrays, because adult Kate came across an old picture of him, and she looked pretty upset.

Rebecca saw the photo as well and said, "I was trying so hard to hold it together that year after your father died, and I wanted to believe so badly that you kids were happy. I didn't see what was happening." Kate added, "I didn't see it either."

It's not yet clear what they mean, but obviously something bad happened in Kate's relationship with Marc. And, honestly, it's not hard for fans to see that happening. At the dinner that he invited himself to, Marc showed several red flags. For one, he got Kate's address off her employee form at work and then just showed up. Kate joked that it was "romantic [and] a little creepy," and then Marc said, "That's me, just all together." Um, he's literally admitting to being creepy, and that's just creepy. He also seemed a little possessive about Kate at dinner, with his arm constantly around her, and he announced himself as her boyfriend when she'd just introduced him as a work friend.

Kevin also got a weird vibe from Marc and was worried that he was too old for Kate, because Marc is 23. In the Season 4 '90s timeline, Kate is likely around 18, since it's detailing the year after Jack's death, and she was 17 when he died. Five years age difference may not seem like a lot, but Kate is at a particularly vulnerable point in her life with her father's recent passing. If Marc were to take advantage of that time in Kate's life, it could be really bad.

There's no mention of whether Marc is in the next episode, but The Hollywood Reporter said that he'd be a recurring character this season. Prior to playing this role, actor Austin Abrams was known for playing Ethan in HBO's Euphoria, Ben in Paper Towns, and for having small roles on shows like The Walking Dead and The Americans. It doesn't appear that he has any public social media channels, and he hasn't yet spoken out about his potentially worrisome storyline on This Is Us with Kate. Hannah Zeile, who plays teenage Kate, couldn't reveal much about her storyline this season either, but she did tell Teen Vogue that it would explore "how Kate and the family attempt to push forward after the death of Jack."

With the Polaroid picture of Marc jogging Kate's memory of him, whatever trauma that relationship came with could play a role in her current relationship with Toby, now that it's come back up. The synopsis for the Oct. 29 episode says, "Kate and Toby try to make time for their marriage," and fans have theorized that they're no longer together in the flash forward. Perhaps remembering things about Marc play a role in that potential outcome.

Clearly this Marc storyline isn't coming to an end any time soon, and his presence may reveal more about Kate's past after her father's death and before she met Toby. Until now, her previous dating life had mostly been a mystery, but that's all getting unraveled now. And it sounds like Marc's appearance in Kate's life didn't turn out to be a positive one.

More like this
'Waterloo Road' Is Back, With More Than A Few Familiar Faces
By Sam Ramsden and Vivian Iroanya
The One Detail From The Tampongate Scandal That The Crown Missed
By Karen Fratti
Booker Prize Winner 'Shuggie Bain' Is Being Adapted For TV
By Sophie McEvoy
Sophie Turner Will Star As A Notorious British Thief Next
By Darshita Goyal
Get Even More From Bustle — Sign Up For The Newsletter