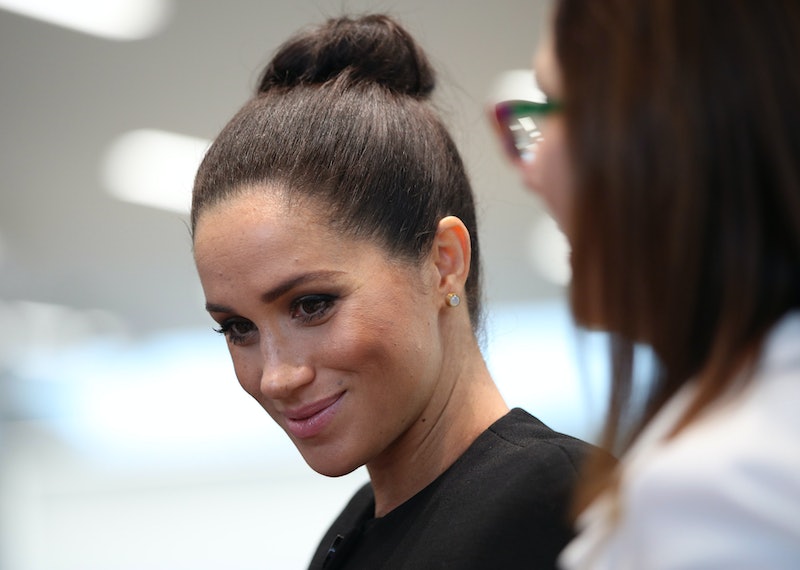 Acting, writing, philanthropy — is there anything that the Duchess of Sussex can't do? According to one of her former musical theater costars, the answer is no. Katharine McPhee revealed that Meghan Markle is a talented singer during a recent interview with People in which she reflected on starring alongside the duchess in musicals as a teenager.

"She was actually in my sister’s class — two years older than me," McPhee told People on Jan. 22. "My sister did shows with her, I did two shows with her when I was a seventh-grader or eighth-grader. They were obscure musicals. I think one was called Yankee Doodle."

And in the interview, McPhee revealed that she wasn't the only one who had some serious vocal chops in high school. "I don’t know if there are videos of her singing, but she’s a really good singer," she revealed. McPhee and Markle both attended Immaculate Heart High School in Los Angeles, and the newly-engaged singer recently shared an adorable throwback photo from one of their school productions.

Alongside a photo of herself and Markle holding bouquets of flowers, the Waitress star wrote on Twitter, "both did musicals together as a kid. one is now the duchess and the other is starring on the west end. basically the same life if you ask me #tbt."

And while McPhee and Markle haven't performed together since their high school years, the American Idol alumnus also told People that she's hoping that the Duchess and her husband, Prince Harry, will be able to come see her perform in the musical Waitress, now that it's opened on the West End. "It would be a nice treat to give them an entertaining evening. But we’ve no expectations," McPhee told the outlet. "We would love for anyone to come and enjoy the show."

Though video clips of McPhee and Markle sharing the stage have yet to appear on social media, royal watchers did get a chance to hear the duchess' vocal chops when a video of her singing "Santa Baby" during a high school assembly surfaced in December 2018.

In the video, which was shared by the Daily Mail, Markle and her friend took to the stage during a holiday concert at Immaculate Heart in order to serenade her fellow students with a rendition of the Christmas classic. And, proving that Markle knew how to spot her fellow future celebrities, her co-performer, Natalie Fryman, also became an actress, who eventually had roles on shows like Hawaii 5-0.

Despite McPhee's praise of her talents — and the exciting throwback video of Markle singing in high school — fans shouldn't expect to see the duchess return to her acting roots any time soon. In 2017, shortly after she and Prince Harry confirmed their engagement, Markle told the BBC that she had given up acting in order to devote her time and energy to her new position as a member of the Royal Family.

"What’s been really exciting, as we talk about this as the transition out of my career... is that the causes that have been very important to me, I can focus even more energy on," she said in the couple's first joint interview. "You realize that as you have access, or a voice that people are willing to listen to, [it comes with] a lot of responsibility, which I take seriously."

She continued, "I don’t see it as giving anything up. I just see it as a change. It’s a new chapter." And, reflecting on the success of her biggest breakthrough role, on Suits, Markle noted that it was easy to walk away on top. "Keep in mind I’ve been working on my show for seven years. We were very fortunate to have that sort of longevity on a series," she explained. "For me, once we hit the 100 episode marker, I thought, I have ticked this box and I feel really proud of the work we’ve done there and now it’s time to work as a team with [Harry]."

At least fans can always relive Markle's days in the spotlight with plenty of adorable throwback videos and photos from her high school musicals. Here's hoping someone manages to dig up some old footage of Immaculate Heart's production of Yankee Doodle.