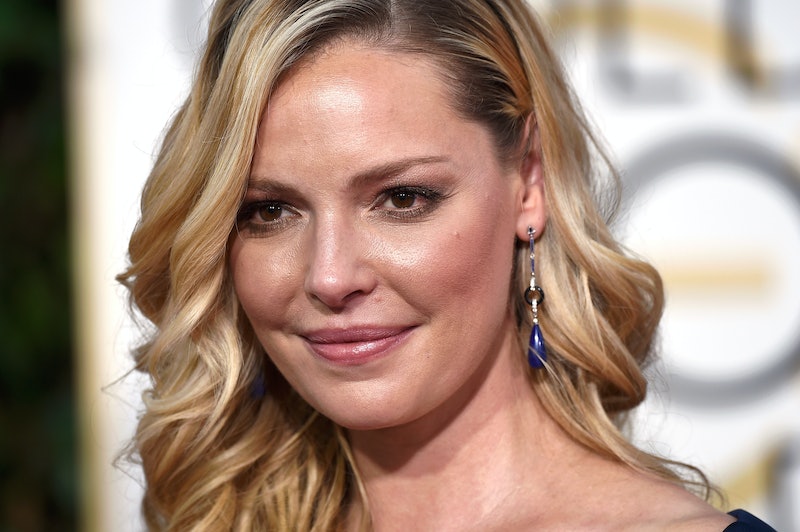 A familiar face could be re-entering the hallways of Grey Sloan Memorial Hospital. But in her character's days, it was still called Seattle Grace. Katherine Heigl shared whether she'd return to Grey's Anatomy, potentially for a series finale (if it ever comes on the heels of its renewal for both Season 16 and 17.)

Heigl is currently filming Season 8 of Suits, which returns July 18, and during a new interview, Entertainment Tonight asked if another TV series of hers ever crossed her mind. But Heigl, who played Dr. Izzie Stevens on six seasons of Grey's, had a pretty open-ended response when it came to the question of coming back to the show. Heigl said:

"I haven't [thought about Izzie] in years. I don't know. I don't know if I would or if I wouldn't. I almost feel like that would almost be distracting again to, sort of, what they've done with that show in the seven years since I left... and what that's become and what it is to the fans now. It must feel like it would just be kind of like, 'Yeah, we already let that go... why are you here?'"

While the actor, who won an Emmy for the role in 2007, didn't totally rule out a return, she also pointed out how difficult it would be to seamlessly re-enter the fold after several years away.

Although, we do have to take issue with the Knocked Up star claiming she hasn't pondered her iconic character "in years." After all, in 2018 Heigl predicted what Izzie Stevens is doing today, in the aftermath of former onscreen husband Alex Karev's (Justin Chambers) marriage to Camilla Luddington's Jo Wilson in Season 14.

In an interview with TVLine, she said she'd "have to start wondering where Izzie is. Like, what is she doing? Where did she go?" Heigl said in addition to pursuing her medical career further, her character "could have children by now ... She could be married." In regards to Izzie's former flame, Heigl remarked, "Alex needed to find love — true love. If she has moved on, then I would expect Izzie to be very happy for him. She would want him to be happy."

Another complication that could keep Heigl from going back to Grey's? Her rumored fallout with the show's creator Shonda Rhimes. A year after her Emmy win for the show, Heigl publicly withdrew her name for Emmy consideration in 2008. She told the Los Angles Times, she hadn't been given the proper storylines for awards consideration, adding, "I did not want to potentially take away an opportunity from an actress who was given such materials."

Rhimes told Oprah Winfrey in a 2012 interview that while Heigl's comments "stung," she was "not surprised" by the move. However, it seems that the 27 Dresses actor made amends with the Scandal creator. In a 2016 interview with Howard Stern, Heigl had this to say about the situation and her ensuing apology:

"I went in to Shonda and said, 'I'm so sorry, that wasn't cool; I should not have said that. I shouldn't have said anything publicly, but at the time I didn’t think anybody would notice; I didn't think that journalists would see who submitted and who didn't. I just quietly didn't submit. And then it became a story and then I felt I was obligated to make my statement."

No matter if Izzie Stevens ever graces our screens again, we'll always hold a candle for our Grey's OGs.

More like this
We Finally Know When 'Grey’s Anatomy' Is Coming Back
By Brad Witter
'Criminal Record' Is The 'Doctor Who' Reunion We’ve All Been Waiting For
By El Hunt
Regé-Jean Page Spoke Out On His Rumoured 'Bridgerton' Return
By El Hunt and Maxine Harrison
At 14, Jenny Han Wrote Rom-Coms About Her Friends & Fan Mail To Leo DiCaprio
By Alyssa Lapid
Get Even More From Bustle — Sign Up For The Newsletter