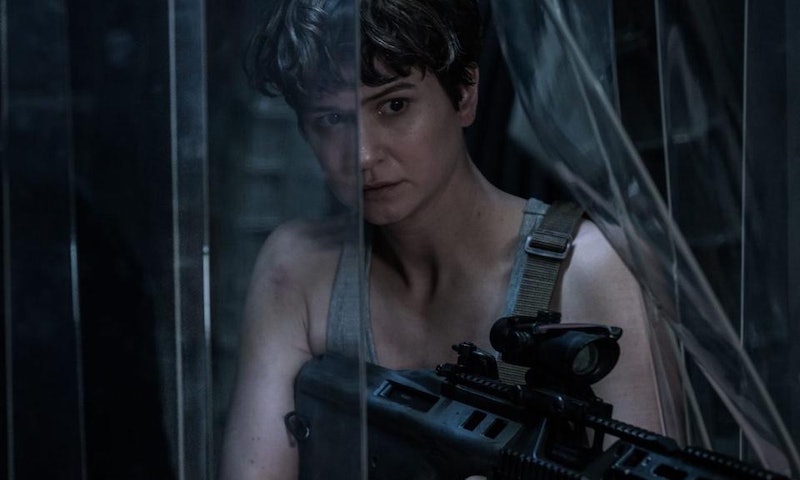 It's hard to look at Katherine Waterston's Daniels in Alien: Covenant and not immediately think of Sigourney Weaver's Ripley in Alien. Ridley Scott's growing Alien franchise is, after all, specifically known for pioneering the tough, female science-fiction heroine when Alien was released in 1979. Every subsequent Alien film has featured complex, fierce women as leads, including 2012's Prometheus, which starred Noomi Rapace. It's impossible not to a female protagonist in an Alien film, especially the newest one, and not think of Ripley — but that doesn't mean they can't have lives and personalities of their own. They may both be tough women, but Waterston's Daniels is not the new Ripley in Alien: Covenant.

Daniels and Ripley are, admittedly, quire similar. Both are smart, tough, driven women working in space. Both are white and fighters against the Xenomorphs (the huge, black aliens that plague all Alien films). Waterston herself admitted that the two characters share a similar badass nature. "It's not just that [Ripley] is tough in the movie, but she emerges from the crew," she said in an interview with Digital Spy. "I saw this in Daniels too — she's just a regular person. She's not a superhero." That said, just because they share similar features and basic plot points doesn't mean that Daniels is the new Ripley. Here are just a few reasons why we shouldn't call Daniels the new Ripley.

From the get-go, Ripley and Daniels have very different goals. Daniels is part of a colonization mission. She knows her purpose is to go out and live in space. Ripley, however, had no intentions to live on some foreign planet. While Daniels is an explorer and scientist by trade, Ripley is a warrant officer who has every intention of returning safely home.

In Alien: Covenant, Daniels isn't just a scientist looking to colonize a planet with her team, she's also a grieving wife. After her husband, Captain Branson, dies in his cryo-pod, Daniels is immediately thrust into a new dire situation. From the very beginning, Daniels' journey and her determination to stay alive has a very different motivation than that of Ripley in Alien.

There's Only One Ripley

No offense to Daniels, but there is only one Ripley. Ripley earned her place in cinema history as a groundbreaking female character. Why is it that we always want to replace her with a shiny, new hero? Not does it potentially cheapen Ripley, it also keeps Daniels from being a fully realized character on her own.

Not All Women Are The Same

Of course, Daniels also deserves to be treated with respect as separate from Ridley. When Waterston's casting was first announced, rumors spread that she was really playing Ridley's mother. Those rumors were quickly shut down, but the fact that the theory gained any traction is telling. It's almost like some members of the public needed to justify having two female leads in one film franchise by making them related.

Does Daniels share some of Ripley's trademark characteristics? Yes. But I think that we can all agree that Daniels and Ripley aren't the same person, and, more than that, they don't need to be constantly compared to one another. Just let them live.