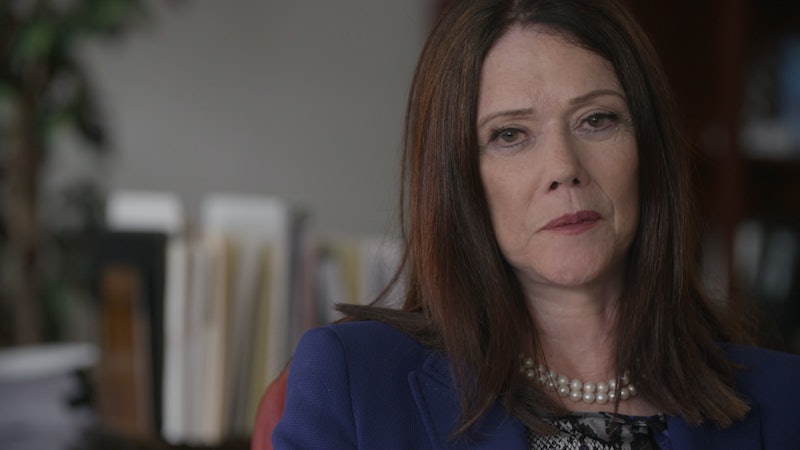 Kathleen Zellner is not a woman who gives up. That much is made clear in Making A Murderer Part 2. Over the course of 10 episodes, she douses a dummy's head in fake blood, consults with a controversial brain fingerprinting expert, and bears the heat of an Arizona desert to watch a ballistics expert shoot at bovine scapulas — all in the hopes that, one day soon, she can find evidence to set Steven Avery free.

Zellner has devoted the last two years of her career to getting Avery out of prison. As documented on the show, he and his nephew, Brendan Dassey, were convicted in 2007 for the murder of Teresa Halbach, but have firmly maintained their innocence. Part 2 of the docuseries provides a window into Zellner's efforts to get Avery released. But while, off-screen, his case seems to have stalled — as reported by the Post-Crescent, he was denied another trial for the second time in September — Zellner says his appeals battle is only just beginning.

"One of the misconceptions about the case is people acting like, 'oh, well the case is over,'" she tells Bustle over the phone. "Brendan Dassey's case is way further advanced than Steven's. They're 10 years past where we are. We're just starting. We haven't had any significant loss yet in the case. We just haven't presented it to a higher court and that's what we're getting ready to do."

Indeed, Zellner plans to file a brief on Dec. 20 that she hopes will start the process of securing Avery a new trial. "I know that with the evidence we've got right now, if we were given a new trial that [Avery] would not be convicted again. The evidence just wouldn't," she says, her voice never wavering in certainty.

Much of this confidence comes from her track record — over the last two and a half decades, Zellner has exonerated 19 men — but it's also derived from her reliance on cold, hard science. When asked what accounts for her success in overturning wrongful convictions, experimentation is first on her list.

"I don't, you know, just sit around and read case law... I take the pieces of the state's case that resulted in the conviction and then I test those and I try to deconstruct the state's case," Zellner says. "And so it's an attention to detail. I love science. I love experts."

In fact, she's conducted so many experiments for Avery's case that the ones featured in Making A Murderer — of which there are many — represent only a small slice of the work she's put in thus far. Zellner reveals they did several other tests that didn't make into the series, all of which she says only further convinced her that Avery is innocent. And post-filming, she hasn't stopped.

"The whole theory of the state was [Halbach] went there that day, got killed, never left the property. Her car never left the property," Zellner explains. "Now we've got three witnesses that place the car off the property. So from the point where the documentary ended to now, we have a lot more corroborating evidence, and we're continuing to investigate." (Both Avery and Zellner have alleged that Wisconsin authorities framed Avery; the Manitowoc County sheriff's department has repeatedly denied those claims, and said they were no longer commenting on the case when reached by Bustle).

Zellner's hands-on approach, though, hasn't rubbed everyone the right way. A particularly scathing review from Vanity Fair went as far as to say that she "prize[s] drama over integrity" and is more interested in creating "spectacle" than anything else. But Zellner dismisses her critics as "sour grapes."

"I have never had a single allegation about lack of integrity in 30-plus years," she says with a calm confidence, referencing some of her numerous accolades. "And I'm doing this case pro bono. I've spent $250,000 of my own money and I've had a ton of publicity in my career. So being driven by publicity or money? I don't need either of those things. "

Like Zellner, Avery also seems willing to secure his freedom at any cost — if not financially, then emotionally. As reported by Rolling Stone, Zellner filed a motion in July alleging Brendan Dassey's brother, Bobby, and his stepfather Scott Tadych were involved in Halbach's murder. (Neither Bobby or Tadych were suspected by law enforcement in the 2005 crime. Bustle's request for comment from Bobby's mother, Barb Tadych, was not immediately returned. Tadych also did not return a request for comment.) She says that she knew these accusations might create an irreparable rift within the family, but Avery didn't want to back down.

"Steven and I have had long discussions about that, knowing that this would cause problems within the family. So I followed his lead on this," Zellner says. "His position is he's innocent, he is not going to die in prison for a crime someone else committed, and it doesn't matter if it's someone within the family. He's not going to take the fall for someone else. So the family dynamics are not as important in his mind as being exonerated and cleared of something that [he says] he didn't do."

And Zellner remains just as steadfast. Throughout all the melodrama, familial tension, and frenzied media attention, her assertion remains the same: that her desire to free Avery doesn't stem from personal gain, but rather from genuine passion. "I try to go the extra mile for my clients," she says. "I find the cases of people who've been wrongly convicted, somebody who's actually innocent and imprisoned, to be emotionally extremely compelling more than anything else I've done. It's something that just absorbs you, you know, in a struggle to try to save somebody's life. So part of it's being probably sort of a rescuer at heart. That's something that matters to me."

Regardless of the outcome of Avery's appeals case, one thing is certain: Zellner will never, ever, stop fighting for him.