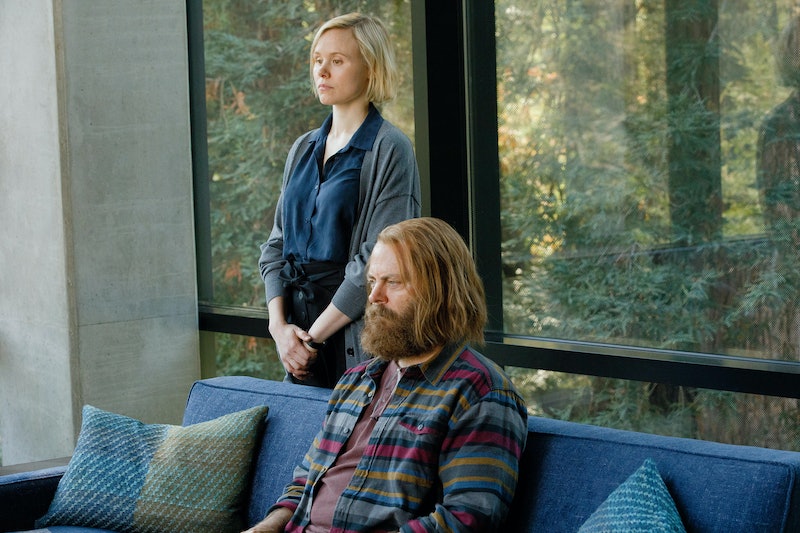 Spoilers ahead for Episodes 1-3 of Devs. When we meet Katie in the pilot episode of FX's Devs, she seems like a standard-issue deputy to Forest, the genius founder of tech behemoth Amaya. She listens more than she talks, communicating guidance to Forest with little more than a solemn nod. But by the end of the episode, it becomes apparent that Katie isn't merely Forest's sounding board: she's his most loyal disciple.

"The problem with the people who run tech companies is that they become fanatics," one character says in a voiceover from the Devs trailer. Just three episodes into Alex Garland's sci-fi thriller, the idea resounds. When Katie walks in on Forest and Amaya's head of security suffocating a suspected traitor, her expression is stone-faced. She's seen this before, or perhaps she simply finds the murder justified. If Forest is her God, then Amaya's technologies are his sacred teachings, worth being protected at any cost.

In one especially chilling exchange with Forest, Katie establishes herself as more than a subordinate, but his confidante. "What are we supposed to do? Unravel a lifetime of moral experience," she tells her boss as he struggles to grapple with the killing. As Katie sees it, Forest's failure isn't in ordering the murder, but in the irrationality of his guilt after the fact. She's the perfect paragon of deterministic thought, able to steer Forest back toward the big picture when his humanity clouds his vision.

Perhaps Katie — loyal, obedient, always at Forest's side — has become a stand-in for Amaya's namesake, the young daughter Forest lost and continues to mourn. It's made clear pretty quickly that the top-secret Devs program is being designed to reconnect Forest with his child in some capacity, but rather than feel threatened, Katie thrills at its success. As the team uses the program to virtually recreate Jesus' crucifixion, Katie watches on with the open-face awe of a true believer in the power of Amaya.

When Forest isn't in the room, Katie isn't any looser with her Devs colleagues. She reprimands them for living up to the basest of Silicon Valley stereotypes after catching them watching a past-projection of Arthur Miller and Marilyn Monroe having sex. "Why do male techs always feel the need to caricature themselves?" she asks. But her objection is really grounded in one of Amaya's basic tenets and, consequently, Forest's best interests: "We don't invade privacy."

In fact, the show hasn't given us any indication that Katie has interests of her own. Such lack of character development may suggest something more harrowing than a perfect student: an apostle more blindly committed to the cause than even her Big Tech messiah.

More like this
Everything To Know About 'And Just Like That...' Season 2
By Jack Irvin and Grace Wehniainen
6 'Happy Valley' Easter Eggs You May Have Missed
By Sophie McEvoy
Claire Foy Spoke Out About 'The Crown's Gender Pay Gap
By Sam Ramsden
'That '90s Show' Is Officially Coming Back For Season 2
By Gretchen Smail and Grace Wehniainen
Get Even More From Bustle — Sign Up For The Newsletter
From hair trends to relationship advice, our daily newsletter has everything you need to sound like a person who’s on TikTok, even if you aren’t.