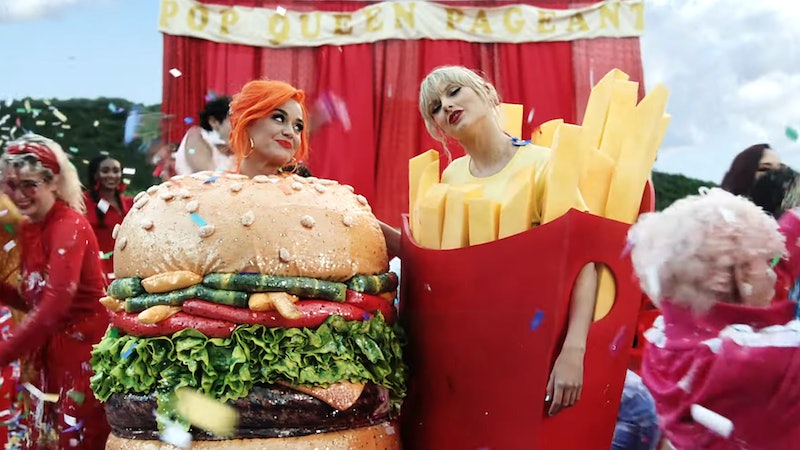 After years of feuding, Katy Perry and Taylor Swift managed to bury the hatchet and becomes friends again — but they couldn't have done it without the help of the very adorable, Benjamin Button. In a recent interview with KIIS 1065's The Kyle & Jackie O Show, it was revealed that Katy Perry and Taylor Swift's reconciliation happened thanks to Swift's newest cat. As Perry told it, her one criteria for a sit-down conversation was getting to hold the famous (and adorable) pet for herself.

According to E! News, Perry opened up tot he radio show about their friendship, saying she made the decision to end the "bad blood" between herself and Swift after she had an epiphany while on tour supporting her album, Witness. "I just thought, you know, she was about to embark on something new and big and needed the support," Perry explained about her decision to offer a literal olive branch to her fellow pop star ahead of the Reputation World Tour in May 2018. "And truly, as I was finishing mine, I realized how much we have in common."

The process of mending their relationship was a long one, according to Perry, and the two began talking little by little until Swift invited the "Firework" singer over for cookies and conversation, but Perry had one request before she agreed to the sit down. "I said, 'The only way I'm coming to your house is if I can hold your new cat,'" Perry joked, referring to Swift's newest addition, Benjamin Button. (Swift adopted Benjamin Button after falling in love with the new kitten on the set of the "ME!" music video.)

"She invited me over to her house, and she made me some cookies. And she actually makes those cookies, and they're actually so delicious. And I brought them home," Perry recalled about the pair's discussion and the sweet treats that she shared on social media to commemorate the moment. Still, Perry and Swift weren't just there to eat cookies and pet kittens. As the former explained to The Kyle & Jackie O Show, they needed to focus on the things they have in common in order to finally mend the rift between them.

"Maybe there's only five other people in the world that can have the same type of conversations and understand where we're coming from, and that we should celebrate our commonality and our friendship and to be able to be there for each other," Perry said, later adding that her decision to reach out was influenced in part by the fact that the pop stars are both role models to young women. "I think that both her and I, you know, we have influenced young people—and especially young girls who are in this type of situation day in and day out at school and are going through a similar type [of thing]," she said. "I think it's amazing that we have this opportunity to change, and I just hope that other people can learn from it, too."

As fans know, their reconciliation led to Perry's epic cameo in Swift's "You Need To Calm Down" music video. “When I thought of this concept for the video and I wrote the treatment, I thought, ‘I’m just gonna ask her if she’d be interested in this, but I would be totally fine if she’d rather keep it private,’" she said in an interview with BBC Radio 1 Breakfast on June 17. "But I sent her a long synopsis of the entire video and she was like, ‘I would love for us to be a symbol of redemption and forgiveness!’”

Apparently, there is truly no divide that chocolate chip cookies and an adorable kitten can't bridge — and frankly, we don't blame Perry for doing whatever she could to get to hang out with Swift's cat squad for an evening.