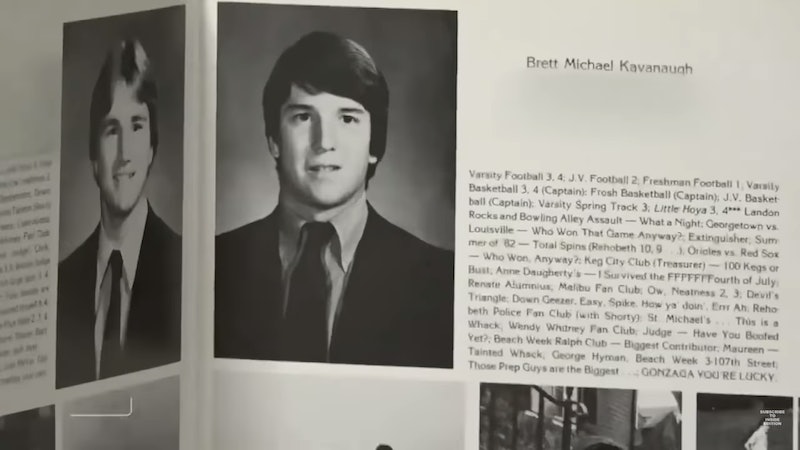 SCOTUS nominee Brett Kavanaugh's yearbook entry from his senior year at Georgetown Preparatory School includes a list of inside jokes and what seem like party references. These details have been scrutinized by both senators and the media since Kavanaugh begun defending himself against Dr. Christine Blasey Ford's claim he sexually assaulted her in 1982. Now, if you want, you can peruse Kavanaugh's high school yearbook thanks to the Internet Archive, a nonprofit digital archive.

"By providing access to the 1983 Georgetown Prep yearbook, the Internet Archive is serving its mission as a library, helping people more fully understand the context of Brett Kavanaugh's nomination to the Supreme Court," Mark Graham, the director of the Wayback Machine at the Internet Archive, told The Intercept.

Previously, only portions of the "Cupola" yearbook — such as the pages for Kavanaugh and his friend, Mark Judge — have been circulated, and they were redacted to protect the privacy of specific individuals named. Now, nearly the entire Georgetown Prep yearbook is available online, only missing some pages related to faculty and lower classes, says The Intercept.

When denying Ford's allegation, Kavanaugh has attempted to paint an image of himself as a pious youth. In an interview with Fox News, he admitted there were parties, but said, "I was focused on academics and athletics, going to church every Sunday at Little Flower, working on my service projects, and friendship."

His yearbook entry, with phrases such as "Keg City Club (Treasurer) — 100 Kegs or Bust" and "Beach Week Ralph Club," paint their own picture of his days at Georgetown Prep.

Of all the evidence relating to Kavanaugh's youth (his personal calendars, a letter to friends), the yearbook has gotten particular attention for its number of apparently crude party references, such as "boofing," which Kavanaugh said references flatulence. Urban Dictionary, however, has another definition. There's also "Devil's Triangle," which Kavanaugh said is a drinking game. However, a quick online search says the term is also slang for a sexual act.

The "Renate Alumnius" line has been particularly scrutinized for it's alleged connection to Renate Schroeder Dolphin, one of 64 women who signed a letter to the Senate Judiciary Committee saying they knew Kavanaugh in high school and defended him against Ford's allegations. The reference to Dolphin appears at least 14 times throughout the yearbook, the New York Times reports, adding that two of Kavanaugh's former classmates say the "Renate Alumnius" line is a boast of conquests.

Dolphin, then a student at a nearby Catholic girls' school, told the Times she didn't know about the yearbook entry when she signed the letter attesting to Kavanaugh's "decency and respect" towards women.

"I learned about these yearbook pages only a few days ago," she said in a statement to the Times. "I don't know what 'Renate Alumnus' actually means. I can't begin to comprehend what goes through the minds of 17-year-old boys who write such things, but the insinuation is horrible, hurtful and simply untrue." Kavanaugh said that interpretation of "Renate Alumnius" was incorrect, adding that he had never had sexual relations with Dolphin.

The nearly full yearbook copy available online allows not only a closer look at Kavanaugh's page, but a glimpse into the full Georgetown Prep community. Other students also mention "100 kegs or bust," "beach week" parties, "devil's triangle," and the "ralph club" in their entries, but conservative columnist John Ziegler argues these jokes were made because of their lack of action. While admitting his yearbook was a "disaster" during his testimony Thursday, Kavanaugh simply concluded that "As high school students, we sometimes did goofy or stupid things."

More like this
The Families Of Grenfell Tower Are Still Waiting For Justice, Five Years On
By Bustle UK
The Most Powerful Photos From The Weekend’s Abortion Rights Protests
By Melanie Mignucci
Police Shove 'Full House' Star Jodie Sweetin At An Abortion Rights Protest
By Radhika Menon
5 Ways To Stand In Solidarity With Women In America From The UK
By Sophie McEvoy
Get Even More From Bustle — Sign Up For The Newsletter