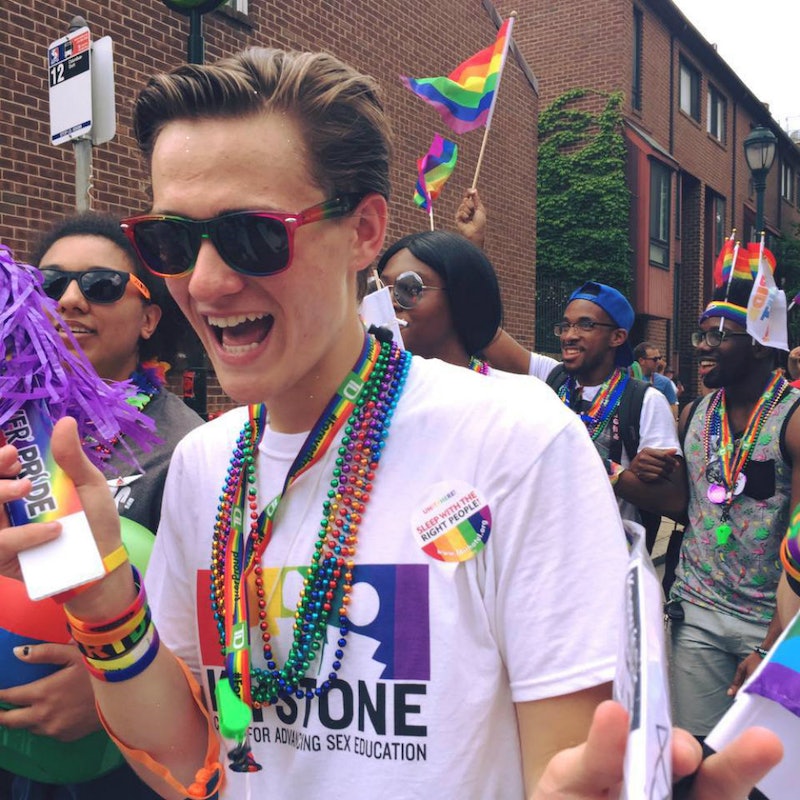 When high school senior KC Miller joined a school group that included survivors of sexual assault, he felt overwhelmed by their stories. As the deluge of sexual harassment stories in the news shows no sign of slowing down, it’s a feeling so many of us can relate to. But while plenty of adults are still fumbling with our feelings, Miller decided to do something about it. His response is the Keystone Coalition for Advancing Sex Education (Keystone CASE), an advocacy group fighting for comprehensive sex education in Pennsylvania.

“I knew I couldn’t do anything about it,” Miller tells Bustle. “I couldn’t just magically make their pain disappear, so I thought about some of the ways I could channel my emotion around hearing their stories into real activism and action. I identified comprehensive sex education as a way of hopefully curbing the sexual assault epidemic we have in America by talking about consent, by talking about legal repercussions, by talking about the implications violence has on communities and on survivors.”

Currently, Pennsylvania schools are not required to teach sex education. They are, however, required to teach students about STD/HIV prevention. There’s no requirement for them to teach about contraception, but they do have to stress abstinence as the only way to effectively protect against STI transmission and unplanned pregnancy. Basically, the current laws mean that Pennsylvania youth are getting a grab-bag of facts, misinformation, and prejudicial attitudes in school, depending on who’s doing the teaching.

“I kind of built what I would call a middle ground, because you have to think about what’s going to get passed in Pennsylvania,” Miller says. “You want to get everything in there, but you have to be practical because anything is better than what we have now. Ideally, we’re all going to get to the California Healthy Youth Act at some point, but even if we can start making steps towards it, it would be a great improvement.”

The next step is to get state legislators to pick the Pennsylvania Healthy Youth Act 2017 and sponsor it as their own. He’s working behind the scenes with a few campaigns to see if he can find the politician willing to take it all the way through debate on the Pennsylvania senate floor. It’s a tough battle, especially in a state that tends to lean conservative. But despite his young age, Miller’s no newbie to fighting for political causes. His first foray into political activism was when he was eight years old and volunteered to make calls for Barack Obama’s first presidential campaign. His grandmother, a long-time activist and prominent figure in her local government, inspired Miller to take on the issues that are important to him. He plans on going to school for nursing and health care management in order to get on-the-ground experience and then, eventually, run for office himself.

“Down the line, it is definitely one of my goals,” Miller says. “I think public service is one of the most admirable ways to connect to community. I’m deeply a people person; I’m deeply rooted in activism and service. Public service really is the embodiment of what I want to do.”

Miller says that, when the time comes, he’ll be “running to heal America.” And as one American who’s feeling pretty beat up these days, I can’t wait.