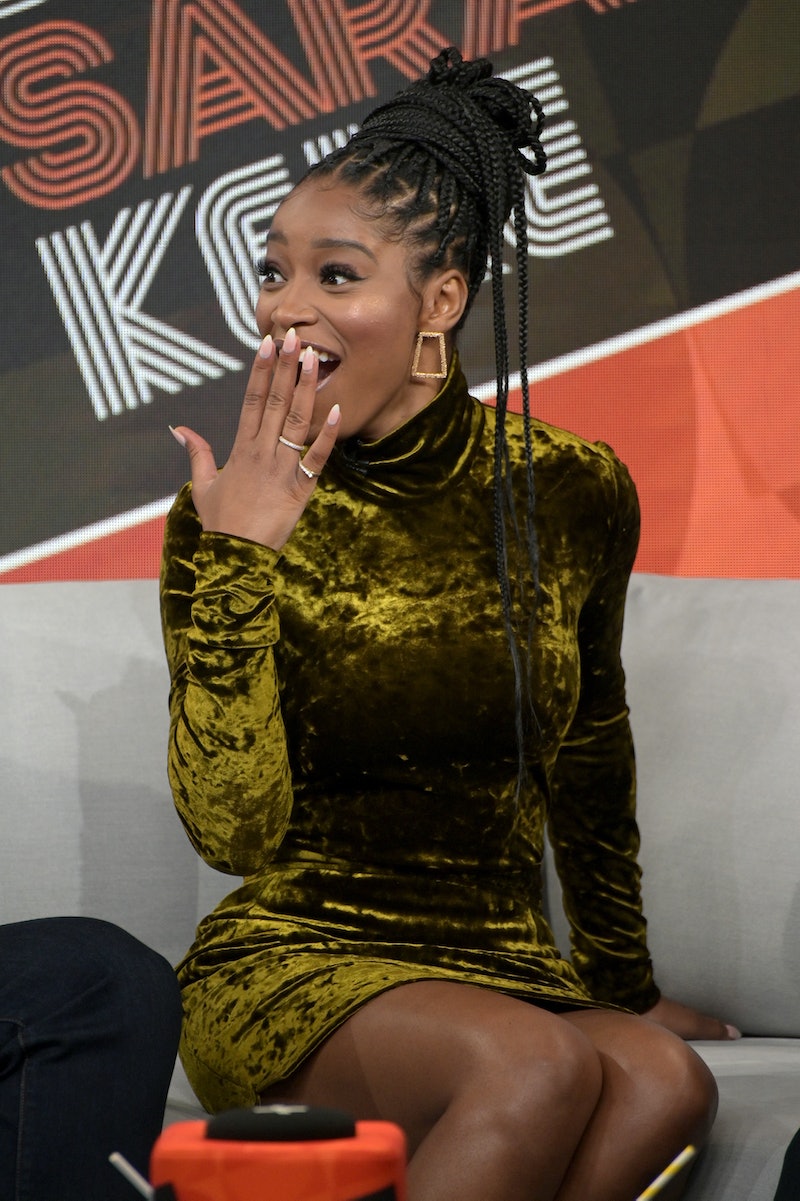 While some called the viral moment when Mike Johnson asked Keke Palmer out on live television "awkward," Keke Palmer used another word to describe how it made her feel: "ambushed." Speaking a few days later on Good Morning America, Palmer explained her reaction to Mike Johnson asking her out. And she revealed what exactly about The Bachelorette star's dating proposal turned her off.

After Johnson tried to pick her up mid-interview on GMA, Palmer returned to the scene of the dating crime to let fans know she was officially saying no to him. During an Oct. 16 segment of the talk show Strahan, Sara and Keke, Palmer said there were two reasons why she wouldn't take Johnson up on his offer. First off, she gets "real spooked about entertainers or reality [stars] … I don’t know, it really scares me to date people in the industry."

However, and more importantly, Johnson's decision to surprise her on-air just didn't feel right to her. "He asked me in front of everybody," she said, explaining that it made her feel "ambushed."

Palmer was taken off guard, which is clear from the video. In it, she appears flustered by his question, covering her face with her note card as she tries to get her co-hosts Michael Strahan and Sara Haines to skip to the next question. “I felt like it was a big ol’ gag,” she said later. “I felt like I was the gag, I’ve been duped!”

Not to mention, he pulled this at her place of business. It's something Palmer was quick to point out when it happened, even as her co-hosts egged her on to respond to Johnson's ask. “Ladies, I’m at work. I’m at work, guys. Go ahead,” she said. “I’m at work.”

During the Oct. 14 segment, Johnson, who had recently been spending time with Demi Lovato, talked about how he "made a mistake" by dating in the public eye. And then he swiftly turned around and very publicly asked Palmer out. "If I were to ask you if we could go on a date in the public," he said flirtatiously, rendering Palmer speechless as the crowd cheered him on. “You guys are embarrassing me,” Palmer said as her co-hosts let her know they approved of the match.

Following the viral incident, Johnson tweeted that he "made a playful comment" as a way of deflecting a question about his dating life. But don't get it twisted. "I'm happy," he wrote. "Those are the vibes."

Johnson clearly didn't take the rejection too hard. As for Palmer, she's taken, as she made clear on Instagram, sharing the viral moment with the hashtag "#imtakenbymyjob." Hopefully, that'll stop anyone else from asking Palmer out during work hours.