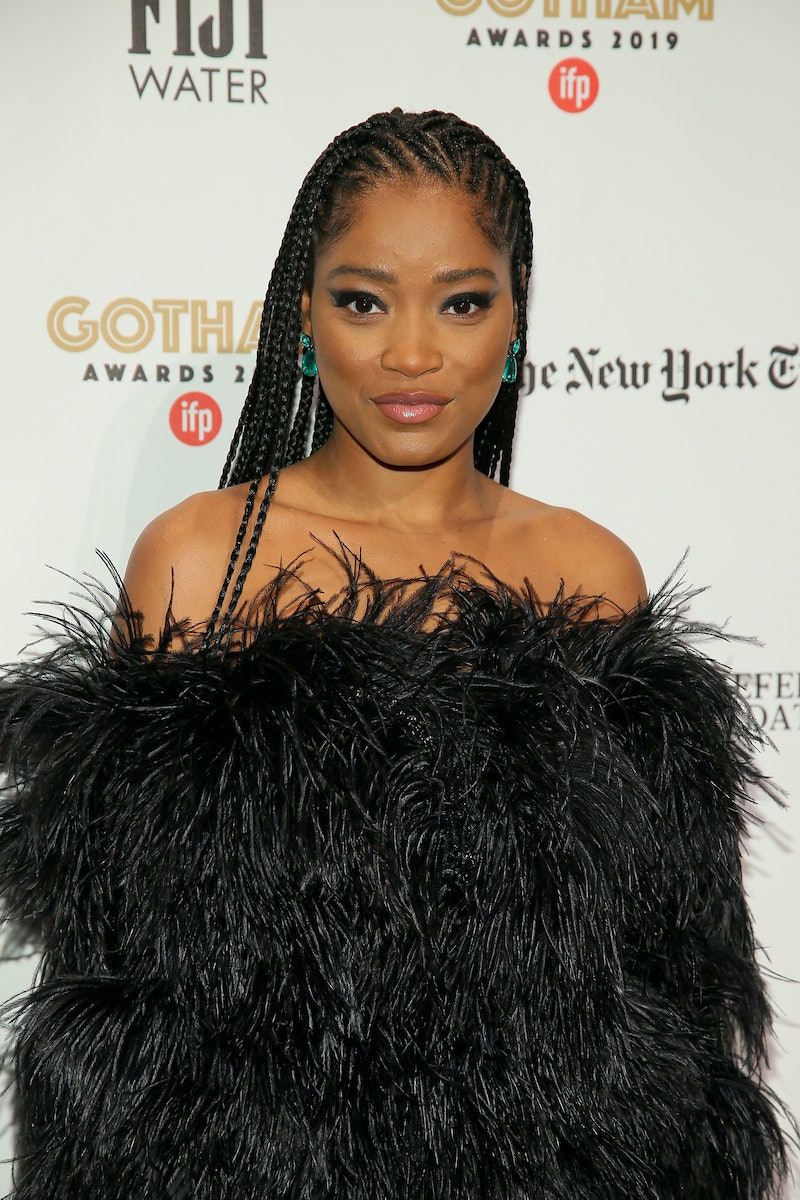 Over the last few weeks, Keke Palmer has emerged as an instrumental voice in the fight for justice for George Floyd and the Black Lives Matter movement, and she's not going to stop anytime soon. In a new op-ed for Variety, published on Tuesday, June 9, Keke Palmer wrote about the importance of protesting and explained why kneeling should no longer be an accepted form of solidarity, especially from authority figures.

In the essay, Palmer opened up about the viral video of her at a Los Angeles protest, where she challenged a National Guardsman, who was stopping protesters from going beyond a certain point, to march with them instead. "In my wildest dreams, they would all march with us without risk of punishment, in the same way that if the whole class walks out of school, no one gets detention for it," she wrote. "If enough of them felt moved to do this, it would offer so much inspiration and impact the movement in such a meaningful way."

The National Guard didn't march with them, but some did kneel as a sign of solidarity. But that wasn't good enough for Palmer, which she explained in her op-ed. "Kneeling has become a mockery of sorts," she said. "Kneeling on George Floyd’s neck is what killed him. Now we see police officers kneeling and then, moments later, attacking peaceful protesters. At this point, the kneeling has no meaning."

Palmer also explained why it was an issue that the National Guard was instructed to "protect the businesses" in the area, as she was told in the video. "In that moment, I wasn’t thinking about who may or may not touch a building; I was thinking about how we’re out here, fighting for a call to protect human lives," she said. "And the government is telling you to protect a building? That doesn’t add up to me, and I wanted to challenge them with the question, 'How does that add up to you?'"

In an interview with GMA, Palmer said she spoke to the National Guard in an attempt to "unite as human beings" for one common goal. "Here we are marching in peace and with purpose, and I'm sure many of them feel the same way as we do," she said. Now, she writes, authority must be challenged to enact actual change.

"I truly believe that everything that has led us to this moment has prepared us for a revolution and a revelation: the dismantling and rebuilding of a system that is better, more equitable and representative of the people it claims to represent," she wrote, speaking directly to millennials. "While it may be scary, we were born for this: We were born to be leaders and grow out of just 'following rules' because following rules isn’t enough."

More like this
Twitter Is Identifying With Sally Field & Jane Fonda’s Friendship In New Viral Video
By Jake Viswanath
Keke Palmer Shares The Sex Of Her & Darius Jackson's Baby
By Jake Viswanath
'The Queen’s Gambit' Season 2 Tweet Wasn’t From Anya Taylor-Joy
By Mary Kate McGrath, Jack Irvin and Grace Wehniainen
Ashton Kutcher Wants Danny Masterson “To Be Found Innocent” In Rape Retrial
By Jake Viswanath
Get Even More From Bustle — Sign Up For The Newsletter
From hair trends to relationship advice, our daily newsletter has everything you need to sound like a person who’s on TikTok, even if you aren’t.