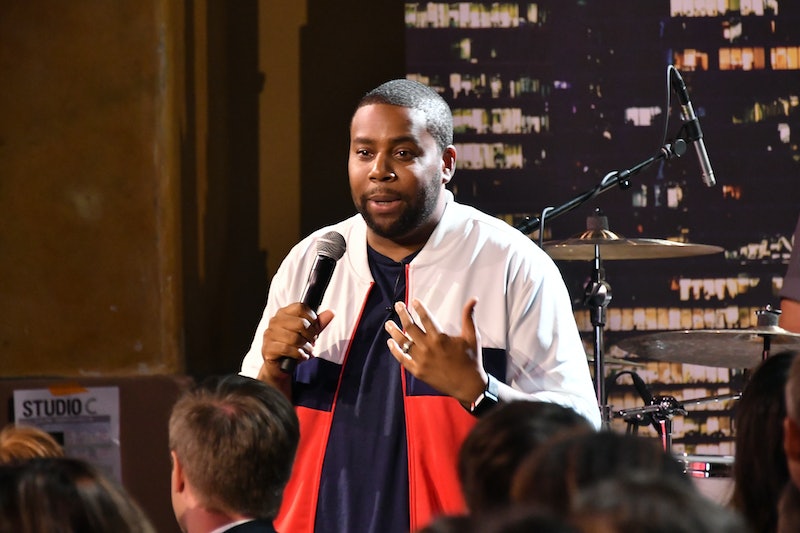 Saturday Night Live has never been a stranger to controversial topics, but a sketch during the Oct. 13 episode this season divided audiences by presenting a light-hearted impression of a convicted criminal. Kenan Thompson's impression of Bill Cosby on SNL made some viewers uncomfortable, while some long-time SNL fans on Twitter were happy to see what may have been the final performance on one of an SNL legend's most famous impressions.

Thompson has a long history of portraying Cosby, from portraying Cosby giving a screen test for Back To The Future, to an appearance on "Celebrity Jeopardy" and many sketches in between. Even prior to his decade-plus career on SNL, Thompson worked with Cosby directly on the 2004 film Fat Albert. Aside from Thompson's brief appearance as Cosby during the SNL 40th Anniversary edition of "Celebrity Jeopardy," Thompson had not performed in a sketch as Cosby following the allegations of sexual assault that were made against him — until the Oct 13, 2018 episode.

The sketch in question began with SNL alum Seth Meyers, the host for the evening, playing a man just walking into a prison to start his sentence, only for a shadowy figure warning him about the struggles of a life behind bars. The character's gruff and serious voice vanishes when the character is revealed to be Bill Cosby, who is in jail for sexual assault — a real-life detail that the sketch left out.

While Thompson's portrayal of Cosby was a cartoonish exaggeration of Cosby's character from The Cosby Show — Cliff Huxtable — Meyers' character repeatedly tried to get him to understand that he was in prison for serious alleged crimes, and that his problems were a whole lot bigger about where to hide his contraband hoagie or the amount of Jell-O provided. This portrayal of Cosby as a light hearted, bumbling old man generated controversy among the show's audience on Twitter.

While some viewers didn't enjoy SNL making light of a man that is serving up to ten years in prison for sexual assault, per CNN, other viewers definitely enjoyed Thompson's impression and the references, including the aforementioned Jell-O pudding pops to Kids Say The Darndest Things. The Cosby seen in the SNL sketch is one who is optimistic about his future in prison, but also one who is deeply out of touch with reality to the point where he believes the turtle that is in his jail cell is actually Quincy Jones.

Although the SNL cast seemed to have a great deal of fun mocking Bill Cosby, Meyers — through his character — frequently took opprotunities to provide context for what Cosby has been accused and expressed anger towards the hurt that Cosby has brought on many people, at one point asking Cosby if he ever considered "just dying."

While opinions on the Cosby sketch were divided, it was pretty clear that no one on the show was on the side of Cosby himself. This sketch was possibly Kenan's final time performing his Cosby impression — it seems appropriate to retire the impression of a man in prison for a heinous crime — and fans of the actor are clearly pleased that he brought his impression to the SNL stage one last time.