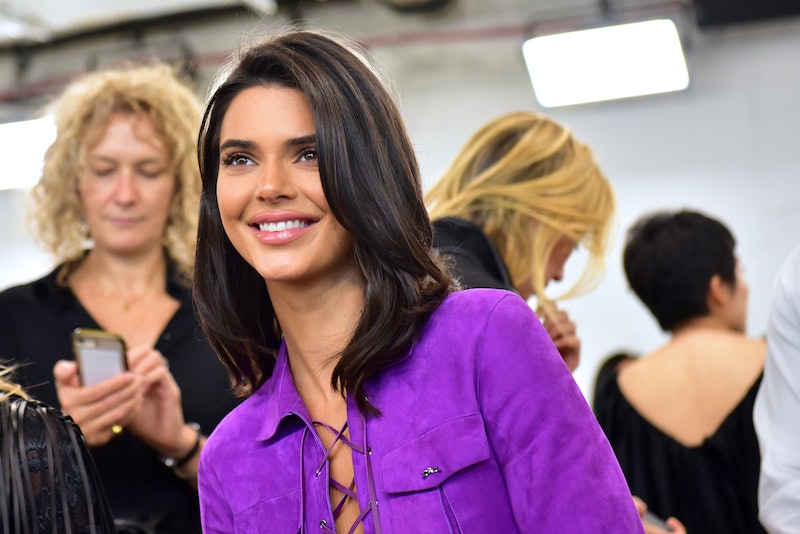 On Jan. 9, Jenner posted two behind-the-scenes videos from one of her photo shoots on Instagram, in which she can be seen trying to get rid of the winter blues in a couple of bikinis. She captioned the clips with a jokey, "i do my own stunts." Her post drew a lot of attention, as it has amassed well over 7 million likes and counting. Of course, it also caught the eye of Simmons, the reality star's rumored boyfriend. He commented on the post, "Come here," to which Jenner replied with a car emoji dashing away, implying that she's on her way to the basketball player.

If you've been following along with Jenner and Simmons' whole relationship saga, you would know how major this latest interaction really is. While it's unclear exactly where things stand between them at the moment, it's evident that there's still some major flirtation going on. Until now though, it's mainly been emoji comments. But, with Simmons' recent "Come here," and Jenner's coy response, it may be a sign that things are heating up for the couple.

It was only a couple of weeks ago that Simmons left another flirty comment on one of Jenner's posts. According to Us Weekly, the Keeping Up With the Kardashians star posted a photo of herself on Dec. 26 that was taken during the annual Kardashian Christmas Eve party. The basketball player commented on the post with two drooling emojis, an obvious sign that he loves the pic.

Since emojis are clearly one of the favored methods of communication for "Bendall," it should come as no surprise that Jenner has also posted a fun, emoji-filled message to Simmons on one of his Instagram posts. In mid-December, the KUWTK star posted a simple bear emoji on one of his snaps, according to ELLE Australia. It's anyone's guess as to what the choice of emoji means. But, it's safe to say that it's probably some kind of cute message of affection.

As of right now, it's still unclear whether Jenner and Simmons are officially an item. Neither of the two have commented about the relationship and, flirty comments aside, they've also yet to actually post photos featuring each other on their respective Instagram accounts.

In November, which was around the time that they reunited after a reported split sometime in late summer, a source at Us Weekly related that the pair's relationship is more of a casual one. "Kendall likes hanging out with Ben – he’s funny and can relate to a lot of things that Kendall relates to," the source told the publication, "He’s in the spotlight and understands that they need to be on the down-low. He also travels and works as much as she does, so it works for them."

Until Jenner or Simmons open up about their relationship, in more than emojis, fans will just have to wait and see whether they're the real deal or just a casual, flirtatious duo.