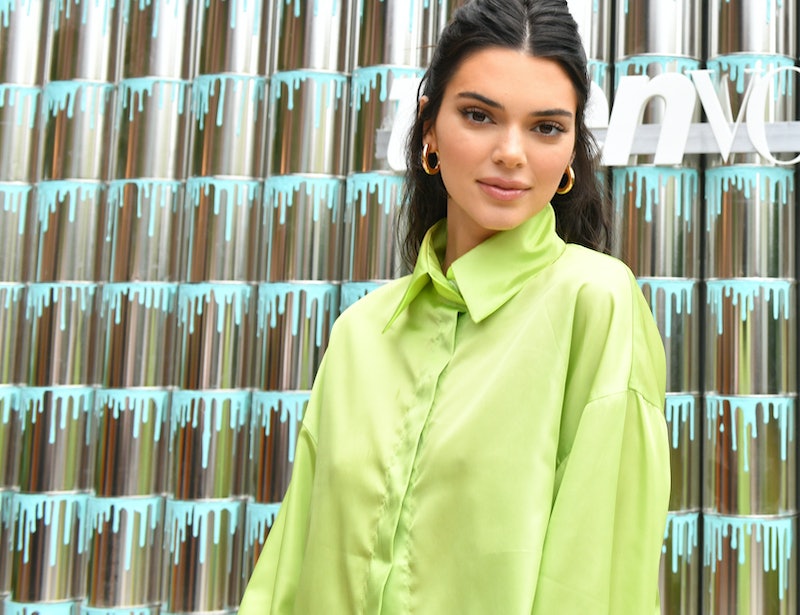 In a small Brooklyn hotel with exposed brick walls and muted lighting, Proactiv ambassador Kendall Jenner sits on an oversized couch wearing a lime green shirtdress and crystal-embellished pumps. She fiddles with the long bell sleeves of her outfit as she remembers the roots of an insecurity that has defined much of her youth and adulthood — her skin.

Jenner, who is at the Wythe Hotel for a panel with Proactiv, remembers noticing her first major breakout at 14 years old. It was her first day of high school, a day many teens stress — Jenner included. In the morning, she looked in the mirror to find her forehead spotted in tiny milia, little bumps signaling a breakout. That moment, Jenner says, was the start of her struggle with acne.

"Before that, I may have gotten one or two zits here and there," she tells me. "But never bad. My entire forehead was covered in little milia. And then it just grew from there. It started to happen all over my face — milia and also gnarly zits."

The breakouts didn't stop until Jenner went on birth control two years later at age 16. For the rest of her teens, Jenner had clear skin that made her feel confident and in control. But in 2018, Jenner learned she could no longer take birth control due to health issues. While coming off the medication, her breakouts came back.

"I had flashbacks of being in high school..." she says of getting breakouts for the first time in six years. "I experienced [acne] in two different times in my life. One being high school, when all you're trying to do is be accepted and be part of something, and I wouldn't even look people in the eyes when I would speak to them. The next time it came around, I was supposed to be this model who has everything together. That's never the case, first of all — good skin or not. But the whole world is looking at you, and it's like a magnifying glass on everything that you do and what happens to you."

Jenner, at 23 years old, was dealing with acne at an age when most women are "expected" to phase out of skin concerns. But women aged 20-plus are experiencing acne and other skin insecurities, and Jenner says she wants to represent them through her partnership with Proactiv.

I love that I can be vulnerable in this situation and show people that I'm human, too.

Jenner has been using Proactiv for almost a year now, with the brand approaching her after seeing her skin struggles targeted in the media. Before committing to the partnership, Jenner says she wanted to make sure the products really worked for her.

She was a self-admitted skeptic who quickly turned into a believer after a few months of using the products, along with laser treatments and PRP (those "Vampire Facials" her older sister Kim is infamous for trying) to treat scarring. She's such a believer, in fact, that she hasn't even tried Kylie Skin, her younger sister's recently released line of skin care products.

"I'm stuck to my routine," she says of not trying the family products. "I don't want to do too much."

Through getting comfortable with her skin and skin care routine, Jenner says she considers herself a "non-certified dermatologist." And that even comes with taking extractions into her own hands. Yes, Jenner is one of those people who loves the gross satisfaction of a good pimple popping moment.

"I don't ever really like to extract a big pimple, unless it's like really necessary and it's about to explode," she says. "But, I've learned how to extract the little milia — and it's super satisfying."

But not everything has gone off without a hitch with Jenner's partnership with Proactiv. When the campaign was first announced in January, critiques on Jenner's authenticity when it comes to the products she promotes dominated much of the public conversation around the partnership.

For the next phase of her work with Proactiv, Jenner is focused on leaning in to "realness" — a quality she says has been top priority all along.

Sitting down with Jenner in person, I can see her skin has clarity that can't be faked with makeup and airbrushing. With her hair pulled back and a natural makeup look, Jenner is no longer hiding her skin and embracing her famous low-key glam.

Staying natural, authentic, and real is how Jenner plans to tell the story around her skin care journey. And she's not afraid to open up around an issue that once was her biggest insecurity to do it.

"I love that I can be vulnerable in this situation and show people that I'm human, too," Jenner says. "And I hopefully can set a sort of example that it's OK, and everyone deals with stuff like this."

More like this
Selena Gomez Posted A No-Makeup Selfie & We Stan A Relatable Queen
By Olivia Rose Rushing
15 January 2023 Beauty Launches Our Editors Can't Get Enough Of
By Rachel Lapidos
Kim K, Oprah, & Jennifer Lopez Celebrated 25 Years Of Anastasia Beverly Hills
By Olivia Rose Rushing
The Best Beauty Looks Spotted At Paris Couture Week 2023
By Audrey Noble
Get Even More From Bustle — Sign Up For The Newsletter
From hair trends to relationship advice, our daily newsletter has everything you need to sound like a person who’s on TikTok, even if you aren’t.