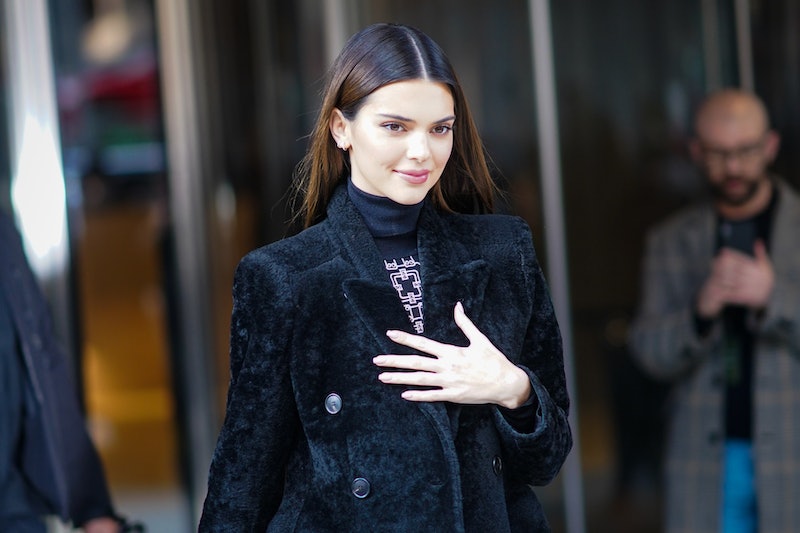 Kendall Jenner is not interested in anyone's commentary on her love life — especially if that commentary involves people trying to shame her. On Wednesday, April 29, Kendall Jenner defended her dating life in a NSFW tweet after reports surfaced that she has been spending time with NBA player Devin Booker during quarantine. According to TMZ, the supermodel was spotted with longtime friend Booker during a road trip to Sedona, Arizona, where they were getting "some much-needed air."

In response to TMZ's Twitter post about the rumors, one Twitter user implied that Jenner — who has previously been linked to Blake Griffin and Ben Simmons — is being "passed around" by various NBA players in a tweet that seems to have since been deleted. Once another Twitter user, @demi1220, defended the model by writing that "maybe she['s] passing them around," Jenner fired back at the original tweet with a post defending her right to date whoever she wants.

"They act like I’m not in full control of where I throw this cooch," Jenner wrote on Twitter. Her younger sister, Kylie, instantly praised Jenner's comeback as the "tweet of the year," as thousands of Jenner's fans and social media followers shared their appreciation for her NSFW slam.

Despite inspiring Kylie's favorite online comeback of 2020, TMZ reported that Jenner and Booker are not actually a couple, but are just close friends who have known one another for years. "Kendall and friends have a small social circle amongst the group, who have been following the same social distancing and physical distancing guidelines. Devin is a friend and is part of the small group," a source told the outlet, which added that Booker and Jenner were first spotted hanging out together around 2018.

Even if they were dating, fans shouldn't expect Jenner to offer up any further comments about her their relationship — after all, the supermodel has stated on multiple occasions that she has no plans to make her love life public until she's engaged. "If I'm not fully, fully in it with someone, why would I make it public to everyone else? If I don't even know what it is, why would I let the world know?" Jenner told Harper's Bazaar in April 2017. "I think it's something sacred."

She continued, "It's something between two people, and nobody else's opinion needs to be involved in it. People want to start drama. If I had a boyfriend, people are going to say all this stuff that's probably going to cause us to break up."

In February 2019 — shortly after Jenner confirmed her relationship with Simmons — the model explained on an episode of her Apple Music show, ZaZa World, that she also worries that people only want to date her for publicity. "I need to make sure that you’re here for the right reasons and I don’t want to let the world have their opinion on something and let them fully into something if I don’t even know what’s gonna end up happening in the next couple months," Jenner said. "I don’t want to do all of that unless I’m completely certain in a relationship or it’s been a while."

Since Jenner doesn't like publicly commenting on her love life, it seems that her sassy tweet may be her final word on the subject — and what a final word it is.

More like this
Dixie D’Amelio & Noah Beck “Love Each Other” Despite Breakup Rumors
By Julia Emmanuele, Jordyn Tilchen and Grace Wehniainen
Kylie Jenner Goes Into Labor & Welcomes Her Baby On 'The Kardashians'
By Jake Viswanath
Kim Kardashian Reveals Her Response To Kanye’s Fashion Opinions
By Jake Viswanath
Hailey Bieber Just Responded To *That* Viral Met Gala Moment
By Radhika Menon and Sam Ramsden
Get Even More From Bustle — Sign Up For The Newsletter